On July 14, the Litigation-Administrative Board of the Supreme Court issued a important sentence notable practical effects in the selection processes of state security forces and bodies and in those others where compliance with certain physical characteristics, such as minimum height, for example, may be required.

The plaintiff appeals in her appeal against the decision of the qualification court to exclude her from a selection process of the National Police for does not meet the requirement set out in the Rules of Call to be at least 1.60m tall. (measured 1.57m). Likewise, the minimum height requirement established in Article 7.c of the Regulations for the Selection and Training Processes of the National Police Corps (approved by Royal Decree 614/1995 of 21 April) is indirectly invoked.

Appellant alleged in his complaint that the aforementioned height requirement implies a violation of the articles that provide for the right to equality and non-discrimination by gender in the Constitution and other regulatory bodies. It also maintains that the challenged rule is contrary to the doctrine established by the judgment of the CJEU of 18 October 2017 in the Kalliri case (C-409/16, EU:C:2017:76).7)which found the establishment of a minimum height requirement contrary to European directives on equality between men and women, which would harm women far more than men. 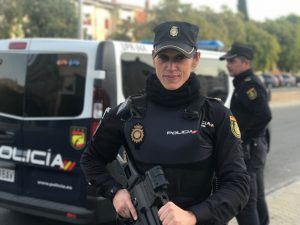 And that’s it, the minimum height requirement for men is less demanding (1.65m) in that it excludes a lower percentage of men (3%) than the percentage of women who are excluded because of their required height (1.60 m and 25% excluded); and this, when both perform entirely analogous police functions, without any justification for demanding a higher level of access to women.

And that is that certainly the limits set by the CNP do not meet the current standards for the average height of men (1.74m) and women (1.63m), as the claimant confirmed.

He further claims that the minimum height requirement established for admission to the CNP is not due to an objective necessity arising from the assigned functionsit should be borne in mind that in the selection process there are physical and medical tests which alone guarantee the physical and medical fitness to perform the functions assigned to the police.

Finally, that there are other police forces such as the Civil Guard and even the armed forces that establish minimum height requirements below those required for the CNP.

Regards to challenging Royal Decree 614/1995, which imposes the said height requirement, the appellant proclaims in his complaint lack of legal coverage of the standard, since, in accordance with Article 55.1 of the EC, the exercise of fundamental rights can only be regulated by law, which must in any case respect its basic content. And therefore a requirement such as the minimum height, which should be understood as included among the factors of discrimination mentioned in articles 14 and 23.2 of the CE, should have an express provision in the law.

Well, our high court held in the judgment that in the first place, there is no violation of the principle of reservation of rights since Organic Law 9/2015 on the personnel regime of the National Police contains a clear regulatory qualification in Article 26.1.d) when it states that the participation requirement will be Not included in any of the causes of physical or mental exclusion that impede or undermine the functional or operational capacity necessary to carry out the tasks of the National Police. The catalog of medical exemptions for admission to the National Police will be established by regulation.

So far, however, he agrees with the respondent administration, because with regard to the other ground of challenge, yes, compared to the position of the Chief State Administration, The Supreme Court considers that the difference in treatment in this case has no objective, reasonable and therefore valid justification.. And for the following reasons:

“The Supreme Court considers that the difference in treatment in this case has no objective, reasonable and therefore valid justification” (Photo: File)

Add to all this the jurisprudence of the Court of the European Union, which practically concludes in decision of October 18, 2017 that, “the provisions of Council Directive 76/207/EEC of 9 February 1976 on the application of the principle of equal treatment of men and women with regard to access to employment, training and promotion professionals, as well as working conditions, as amended version with Directive 2002/73/CE of the European Parliament and of the Council of 23 September 2002 must be interpreted in the sense that they are opposed to a regulation of a Member State, such as those considered in the main procedure, according to which the admission of candidates to the competition for admission to the Police Academy of that Member State is subject, regardless of their gender, to a minimum physical height requirement of 1.70 m, all Once that the legislation disadvantages a far greater number of women than men, and that the aforementioned legislation does not appear to be appropriate or necessary to achieve the legitimate aim it pursues.”

The Supreme Court concludes that the indirect discrimination that occurs by determining the same height for women and men, which was rejected by the cited decision of the Court of the European Union of October 18, 2017, is not saved by the mere fact of determining different minimum heights, if the functions to be performed and the recognized differences in the average height by gender of the Spanish population continue to be ignored.

Therefore, the regulatory norm that establishes the minimum height requirement for admission to the CNP says nothing about the fact that this may be due to some objective necessity arising from the functions assigned to the CNP, and even if the functions performed by the police require particular physical ability, it does not appear that this ability is necessarily related to having a minimum height and that individuals of shorter stature naturally do not have such an ability.

Based on the above reasoning, The Supreme Court upheld the appeal controversial – adm and declared the applicant’s right to be admitted to carry out the selective process by free opposition.