A month ago, a judge sentenced a man to 17 years in prison for subjecting his two stepdaughters, ages 8 and 9, to extreme sexual abuse until they were 14 and 15. The horror the two girls endured reached one of its worst points, according to the prosecutor’s investigation, when one became pregnant. He was only 13 years old. When the baby was born, she was abducted from her home, located in the northeast of Medellin, by the same aggressor who took her to live with him.

This case is a reflection of a reality that keeps Antioquia at the top of the country in the number of pregnancies among girls between the ages of 10 and 14, that is, as a result of the sexual abuse they are subjected to, in many cases by their own relatives. The behavior of the data in this age range has remained stable since 2019 (656 cases), although there has been a slight decline in 2020 (621 cases), the year of the biggest restrictions due to the pandemic, and rose again in 2021 (662), according to the Dane’s records.

In the last three years that ended, Antioquia ranked as the first department of Colombia in these cases. Only in 2021, for example, there is a contribution 14.4% of the national total, above Bolivar (7.6%), Córdoba (6.0%) and Valle del Cauca (5.5%). The numbers can be even more scandalous if we consider those of teenage pregnancies in general.

It is this age limit that worries the authorities the most. From the management of childhood, adolescence and youth of Antioquia recalled that it is much more alarming because any pregnancy of a girl of 14 years or less is considered a crime and a product of sexual violence, which requires comprehensive care and a guarantee of non-recurrence, in addition to strengthening preventive actions.

A need that is based on the social problems caused by teenage pregnancies and the negative consequences they perpetuate in most mothers and their families. Denmark’s figures reflect this almost all of the girls affected by this crime only had pre-school or primary school such as educational level when they become pregnant, which can lead to continued poverty and lack of opportunities.

Medellin ranks first in Antioquia in terms of pregnancy among girls between 10 and 14 years old, which can be read as a reality, also influenced by the number of residents. However, the incidence has a downward trend in this age group. In 2019, 150 cases were registered, in 2020 there were 147, and in 2021 – 116.

The decrease in cases can be attributed to the articulation of strategies that are supported by the City Hall of Medellín and that, although they change their methodologies, names or activities, seek the same goal and have good results. However, Popular, Manrique, Villa Hermosa and Robledo, four of the city’s poorest neighborhoods, still top the list of cases.

After Medellin, Uraba and Bajo Cauca are painted as the sub-regions with the most pregnancies of this type in the department, according to the consolidated Dane. Between 2019 and July 31 of this year, they registered 657 and 309 cases respectively, supporting 43% of the cases reported outside the capital city of Antioquia.

The figures in the case of Uraba are alarming in areas such as Turbo, where cases during this period reached 164, with an annual average of more than 40 pregnancies. Mutatá, with 98, Necoclí, with 86, and Apartadó, with 71, are the other municipalities that gain points in this subregion.

In Bajo Cauca, which registers half the cases compared to Uraba, there are also settlements in the red due to pregnancy among girls between 10 and 14 years old. El Bagre, with 81 reports, is the municipality most affected by the problem; Caucasia, with 67, and Nechí, with 63, are the two cities that follow. These sub-regions, in turn, are the ones that lead the levels of multidimensional poverty in the department.

What can explain the high number of cases? Natalia Montoya, Undersecretary of Public Health of Antioquia, spoke about the phenomenon for which sex education registers significant shortcomings. Regular condom use is not the rule, nor is access to other contraceptive methods.

But the reasons for the reports don’t just answer gaps in sexuality and reproductive education, according to Dane, but also low levels of education, student dropout, ignorance of health services and lack of access. child marriage and gender-based violence in families and communities.

Added to this, according to the departmental management of children, adolescents and young people, is the presence of armed groups in the territories. “They are responsible for major violations of the rights of children and adolescents, especially in a context of inequality and violence,” the service said.

For the sample, button: Dairo Antonio Usuga, alias Otoniel, who He was the head of the del Golfo clan until October 23 last year, is terrorizing the region by sexually abusing girls under the age of 14. Authorities actually issued an arrest warrant for him for child sexual abuse.

The effects of this type of pregnancy, regardless of the causes, can be classified on four fronts, according to Profamilia. Returning to school is impossible in most pregnancies at these ages because of the risks they pose. Taking care of children, in cases of reaching the childbearing stage, implies dropping out of school, in addition to informal employment.

These pregnancies also lead to other types of violence, such as unions forced by economic conditions or to reduce family and community stigma. Other pregnancies before puberty, due to the lack of education and access to methods of reproductive prevention, are the fourth front.

Nothing close to what happened to the 13-year-old minor, pregnant by her stepfather, who was forcibly removed from her family group, according to the prosecutor’s investigation. Ricardo Romero, director of the Medellin section, confirmed that the girl was rescued by a family police station and thus became aware of the abuse she was subjected to. Education, says Profamilia, seems to be the only way out of this problem. 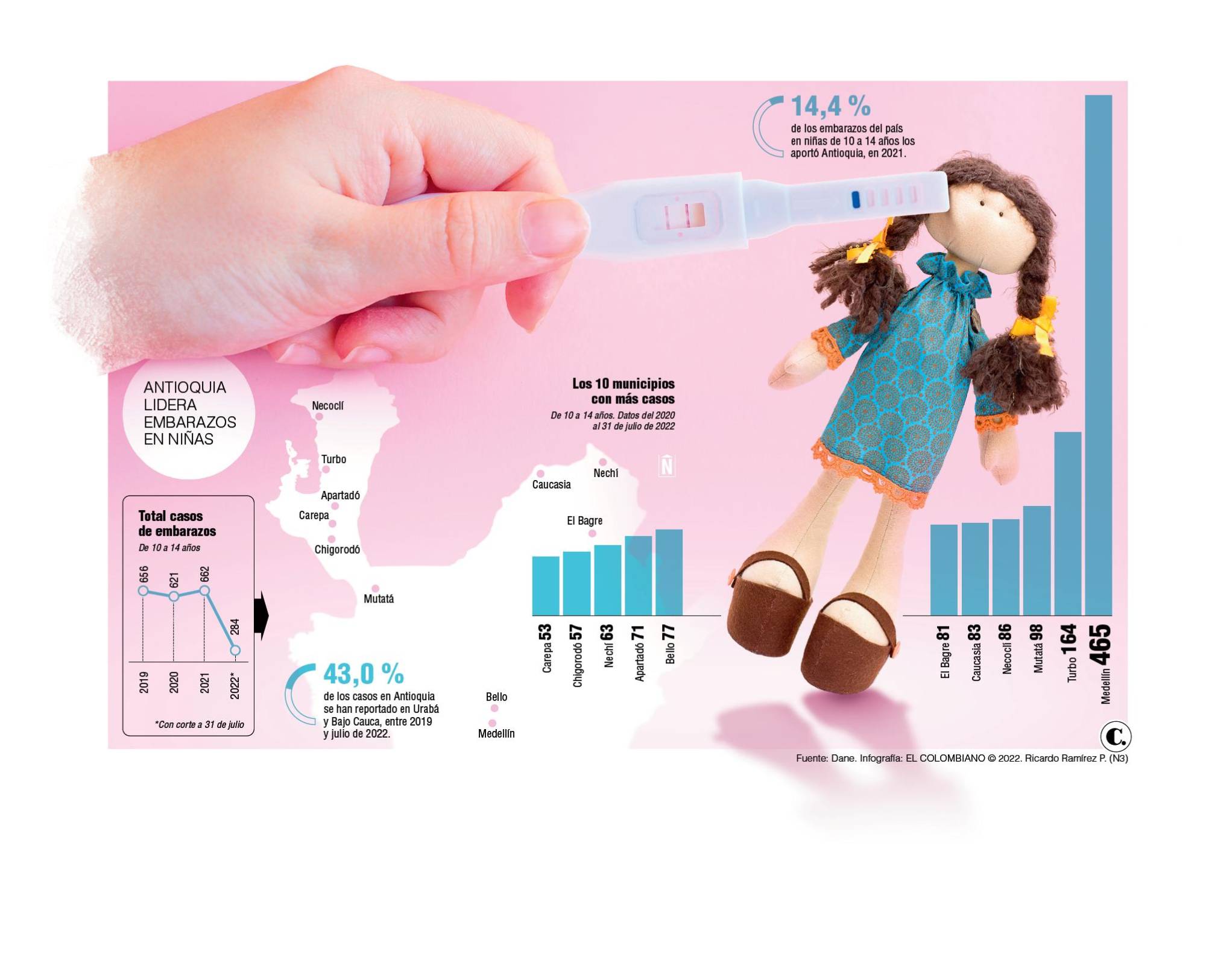