“My intention is to contribute to a better quality of life”

A note sent by the press of the Argentine Navy to our editorial office.

10/13/2022 On Psychologist Day, Professional Corps Lt. Yamila Maria Chale shares her experience as Chief of the Psychological Office at Punta Indio Air Force Base (BAPI), her beginnings in the Argentine Navy, and her memories of the countryside.

Punta Indio – Hailing from the center of the country, Yamila Maria Chale took a turn in her profession as a psychology graduate when she decided to join the Argentine Navy three years ago.

She learned about the institution through her husband, who was a naval officer assigned to the BAPI in Punta Indio, where Lieutenant Chale today happens to develop his profession and works as chief of the psychological office.

He studied psychology at the National University of Córdoba, a province where he arrived with his family at the age of 14 from his native Santa Fe. In 2019, an invitation to join the Navy Career Corps caught his eye, and from then on he knew he wanted to be a part of the Force.

“This new goal required an effort beyond the ‘university faculty’, considerable physical and mental preparation, which I decided to face. I also had to take an extensive academic exam, which was a review of my entire career and new topics for me, such as military psychology,” he recalls of those days.

Overcoming the challenge of acceptance, she attended the Naval Academy after completing the Naval Integration Course (CUINA) for University Professionals and after graduation was assigned to the Health Department at Punta Indio Air Force Base.

Since then, his career has focused on the members of the aeronautical activity – pilots, crew members and student pilots of the Naval Aviation School – and the risks and eventualities arising from the aviation activity. In their day-to-day work, their function is to certify the psychological fitness of both ground-based and flying personnel.

Other activities he carries out with his team are: evaluation of applicants for entry as a sailor from a volunteer detachment in this naval area; assessment of the psychological suitability of personnel who will participate in Antarctic missions; and advising the directorate of the Naval Aviation School.

“What motivates me most to be a part of the Navy is that it is a field that lives, promotes and upholds transcendent values ​​that I believe have been sidelined in today’s world,” emphasizes Yamila.

During these three years, his training continued in two areas: aviation psychology, at the National Institute of Aviation Medicine (INMAE) and in the PAE (First Emotional Aid) network, for the training of personnel in emergency psychology and the management and prevention of emotional and communicative accidents point of view.

“This motivates me to train personnel in topics such as crisis communication and emotional first aid so that they can have tools for their daily tasks,” states Lt. Challe.

In addition, in 2020, he was designated as the gender reference in the area, an office whose mission is to receive and refer complaints; consultations on current regulations; and conflict resolution.

Between Cañada de Gómez and Córdoba

“My place of origin is Cañada de Gómez, Santa Fe. Since then, I carry in my memory the efforts and persistence of my parents, dedicated to work and study; my years at National College, where I completed primary school and part of secondary school, and the antics typical of that age,” he recalls.

During childhood and adolescence, Yamila constantly practiced swimming. “From the spring onwards, my brothers and I – she is the oldest of 3 – went swimming in the morning to exercise. During the summer season we participated in open water tournaments in the lakes of my province.’

After the death of her mother, at the age of 14, “since she was from Córdoba and my family’s dream had always been to live in Córdoba, the following year we decided to make a ‘life change’ and move to this beloved province .for us,” he says.
During these days, she embraced silence – as she herself defines it – and deepened her relationship with her father, with whom she became a close companion.

Already living in the town of Villa del Dique, he graduated from high school at the Fray Mamerto Esquiú School.

Currently, his father and sister live in San Ignacio, Calamuchita, a very small town surrounded by rivers and lakes. “I am a descendant of Arab grandparents, so in my house we make typical dishes and dance Arabic and Greek dances, from the oldest grandparents to the youngest grandson. Together with my family, I cultivated the values ​​that always accompany me and the passion for these traditional dances”, he says.

At the age of 29, Lieutenant Challe concludes: “In the fleet, beyond the institutional, he is devoted to people and subjects, with their specificities and singularities, with their potential to discover and develop. From now on, my intention is to contribute to providing a better quality of life.”

Day of the psychologist in Argentina

Between October 11 and 13, 1974, the Confederation of Psychologists of the Republic of Argentina (COPRA) held the First National Meeting of Psychologists and Psychology Students in the city of Córdoba.
At this meeting, it was established the need to constitute the discipline as a profession with its own identity, separated from medicine due to its specific characteristics. On the last day of the meeting of the plenary session of the Confederation, the proposal to establish a National Day of the Psychologist on October 13 was voted. 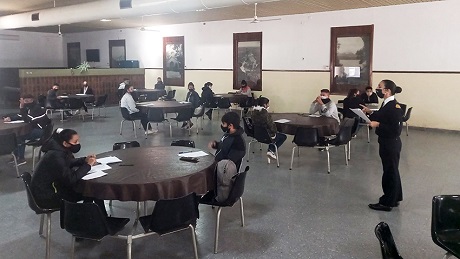