International Day of the Girl is celebrated on October 11. However, congratulations are not necessary as the point is not to celebrate, but rather to encourage reflection on the role of girls in society.

In 2011, during the UN General Assembly, this day was declared to recognize the rights of girls worldwide. The 193 UN member states, including Mexico, agreed on the commitment to guarantee the rights of all girls equally.

In our country, no attention is paid to the inequalities and difficulties that children go through. Girls have the ability to be leaders, professionals and agents of change, but their skills and talents are underutilized.

Of course, there are opportunities, the problem is that they are not within the power of everyone: child exploitation, white slavery and early marriage are only some of the obstacles that thousands of girls in our country go through, including from the Save the Children Foundation, warn that 1 in 100 girls between the ages of 12 and 14 are married or in an informal union.

The government must guarantee girls’ rights and opportunities, but we have an obligation to demand that they are fulfilled. Let’s take this day to think about the role girls play in society, but also to act accordingly. Let’s start with small actions like listening and giving importance to girls’ voices, let’s leave behind the adult focus that tells us that minors’ opinions don’t matter. It is time for girls to take the role they deserve and move forward together towards an equal and inclusive society.

ECHOES OF THE DEBATE

“The Importance of the International Day of the Girl”

Girls and women of the world, this is your day. Girls who laugh, cry, play, feel and pretend, they want to be teachers, doctors, engineers, artists, etc. All those who have a purpose and who push their way in the face of adversity are the ones who will transform our system simply by doing what they love. Women, thanks to your inner child that pushed you to say what you don’t want them to say, that pushed you to dream and love, that keeps fighting in the present to build a better future. Happy day!

I want to tell all the brave, smart, strong girls who have ever listened to the world that they can’t aim so high, dream big, for the simple fact of being a girl; There’s a place where that doesn’t happen: The Future. One that we fight for together. Be an engineer, scientist, astronaut. Be what you want. And if anyone tells you otherwise, prove them wrong. Rebel. Remember, if there had never been a naughty girl, we wouldn’t be where we are.

Every day we become more and more convinced that the future and society itself depend on young people; of their energy, enthusiasm and desire to learn, to achieve growth together. It is proud how the teenagers who from such an early age are increasing entirely focused on causing positive change in various areas: attitudes, opinions, perspectives…

On this occasion, we had the pleasure of interviewing Valeria Simone Cruz, a self-taught young woman who is characterized by being an intellectual, activist and sociable person who conveys messages of culture and peace. Besides being passionate about art and communication.

“I like to reach more young people, more communities and see that change can be made through the word or through images, whether it’s drawings, paintings, videos or even writing; To me, that’s great.”

After facing unwanted situations in high school, her relatives decide that she should take a “break” from her studies for fear of some kind of retribution and that she should relax and forget what happened. So they gave her liberty to study what she pleased, beginning with meteorology and philosophy; among other subjects, in addition to reading and drawing. Thus begins his habit of being self-taught. Later at a conference within EXPO Guadalajara, when explaining a business project developed within a course, realized that she really liked public speaking, so she started looking for an opportunity to continue doing it.

“I’ve always been like that, very fearless, when the event was over, the media interviewed the president of Zapopan and the governor; and I fell into the media crowd. They gave me the microphone and I started giving a whole “speech” when they told me: – Hey, you don’t want to come talk about your project on the radio; and I – Yes! That’s how they started inviting me to talk about my business project”.

He believes one of the biggest hurdles he faces is overcoming uncertainty.

“At the end of the day we all feel insecure at some point, we’re human beings. But when you find your talent or your passion and you know that you can do it and that you can improve and you like it, you start to gain confidence in yourself.”

Over time, he realized that people need balance to discover their talents, and that balance is found through a culture of peace. The reason why she began studying the subject, becoming certified as an International Peace Manager. This is currently being calculated there are more than 300 conferences he has giventasks that led her to receive the 2020 Jalisco State Youth Award in the category of promoting the culture of peace.

“Each of us must have a reference, something or someone that motivates us, and if we can identify with that being, so much the better. As time went on and I realized that I had truly become a role model, I could encourage more girls to become role models for future generations.”

“I can tell you to take advantage, I think you are in a place that I call: The World of Infinite Possibilities, which are those places that can offer you things that you don’t know where they can take you; that everything takes time, nothing is instant, nothing happens by magic, everything takes effort and they should always take that into account. To achieve what they set out to do, they must have boldness, perseverance and discipline. Really take advantage of it because sooner or later it will pay off and be very useful for whatever you want to do in your life.”

Success stories that go above and beyond

To achieve a change in mentality and project it in the society and the whole world, age is not a requirement. Such is the case of Xiye Bastida, a Mexican-Chilean teenage climate activist and member of Mexico’s indigenous Otomí-Toltec nation.

She is one of the main organizers of New York Future Fridays and a leading voice for indigenous and immigrant visibility in climate activism. He is a member of the steering committee of the People’s Climate Movement and a member of the Sunrise Movement and Extinction Rebellion. Co-founder of the Re-Earth Initiative, an international non-profit organization that is inclusive and cross-cutting, “just the way the climate movement should be.”

She sees her climate work as a way to get back to her roots, an approach she hopes will attract others. “People say the climate movement started a few decades ago, but I see it as indigenous people who started protecting the Earth thousands of years ago,” he said. “We need to bring that philosophy back and weave it into today’s society.

Girls like Sie Bastida are breaking down the boundaries and barriers set up by stereotypes and exclusion, including those targeting children with disabilities and living in marginalized communities. As entrepreneurs, innovators and global movement starters, girls are creating a world that is right for them and for future generations.

“Women who fought for equality” at the Solidarity Workshop. Many women have paved the way for generations to come, achieving great milestones in terms of equality.

There are 1.1 billion girls in the world, of which 19.4 million are in Mexico (16.2% of Mexico’s population), according to the United Nations.

On October 20, 21 and 22, Simone Cruz will give a lecture at the Constitución Cultural Center on mental health and the importance of recognizing emotions. 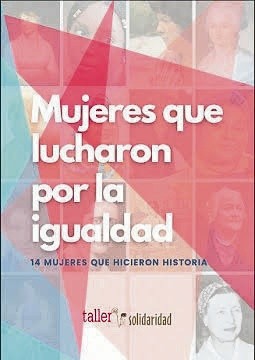 Get the latest news on your email

Everything you need to know to start your day

Registration implies acceptance of the General Terms and Conditions