This event was designed to introduce aviation careers to 13 and 14 year old girls. Participants were selected from Colegio 12 de 15 “Reconquista” and were given first-hand access to United’s EZE operation. There, they learned about the various careers in the aviation industry directly from the women who work in these roles: customer service, ramp operations, aircraft maintenance, catering and cargo.

Let’s remember that in Argentina today, most of United’s managers are women, who put the day-to-day job of decision-making on their shoulders.

We see that Andrea Peña Niño, Sales Manager for United in Argentina, attended the event. We had good conversations with her at IPW last June in Orlando.

Started in 2015 by Women in Aviation International (WAI), Girls in Aviation Day is celebrated across the industry. As described in the statement, “one of the main goals of this program is to expand the professional horizons of women in the aviation industry. This serves as part of the airline’s efforts to close the gender gap by breaking down barriers and promoting inclusivity. 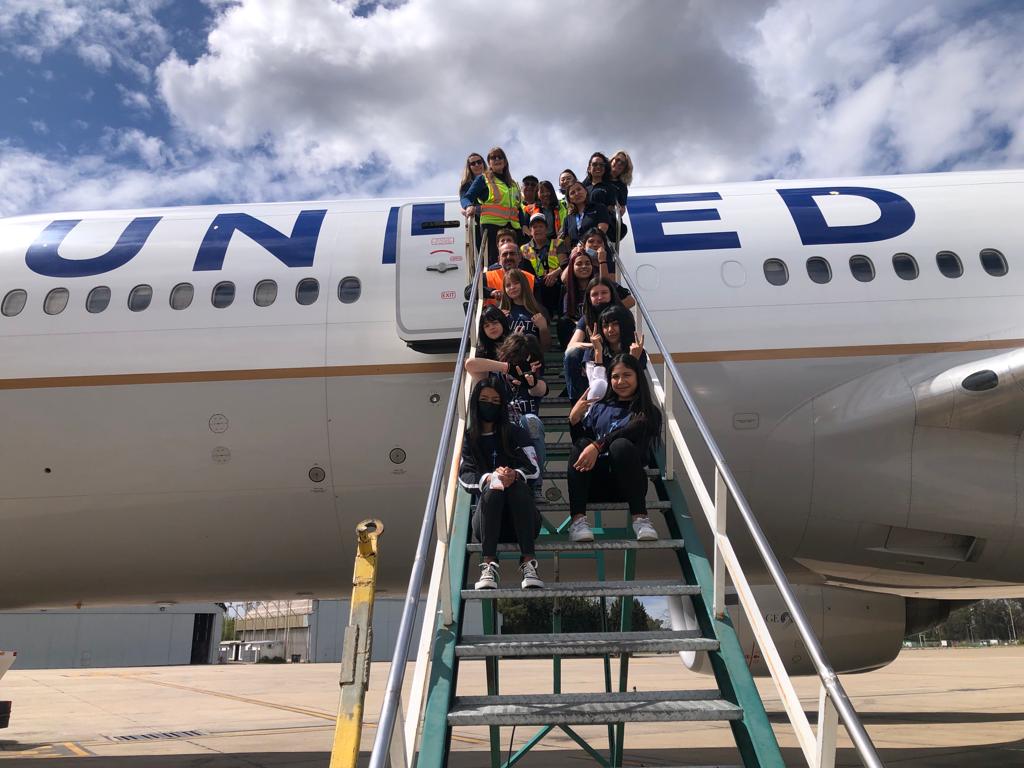 We leave you with the full statement:

BUENOS AIRES, September 22, 2022 – United Airlines today celebrated Girls in Aviation Day at Buenos Aires Ezeiza International Airport (EZE), a special day designed to introduce 13- and 14-year-old girls to aviation careers. Participants were selected from Colegio 12 de 15 “Reconquista” and gained first-hand access to United’s EZE operation, where they learned about various careers in the aviation industry directly from women who work in these roles, including customer service, ramp operations , aircraft maintenance, catering and cargo.
“At United in Argentina, we are proud to support the Girls in Aviation Day initiative, which will be celebrated for the first time in the country. This action aims to inspire school-age girls to choose professions related to the aeronautical industry and motivate them to follow their dreams; that they know that being female is no barrier to them learning and advancing in careers such as aeronautical engineering, mechanics, airplane pilots,
among other opportunities that aviation can offer them,” said Andrea Peña Niño, United Country Sales Manager in Argentina.
Started in 2015 by Women in Aviation International (WAI), Girls in Aviation Day is celebrated across the industry. As an active partner of WAI’s community, uIMPACT, United’s women’s business resource group, hosted several events for girls interested in aviation at its seven hubs in the US and in 5 Latin American countries: Mexico, Panama, Colombia, Argentina and Brazil. Today’s event at EZE marks the first time a US airline has organized a Girls in Aviation Day in Argentina. One of the main goals of this program is to expand the professional horizon of women in the aviation industry. This serves as part of the airline’s efforts to close the gender gap by removing barriers and promoting
the inclusion.
“We are very happy to be part of it, our students are motivated and enthusiastic about the unprecedented experience they will have,” commented María Gabriela González, Rector of Colegio 12 de 15 “Reconquista”. “We know and appreciate that this is the first time this has happened in Argentina, and we emphasize the importance of calling up girls as a way to denaturalize crafts and professions traditionally performed by men.”

About United Airlines
United’s shared purpose is “Connecting people. Unite the world.”
From our US hubs in Chicago, Denver, Houston, Los Angeles, New York/Newark, San Francisco and Washington, DC, United operates the most extensive global route network of any North American airline. United is bringing back our customers’ favorite destinations and adding new ones on its way to becoming the world’s best airline. To learn more about joining the United team, visit www.united.com/careers and find more information about the company at www.united.com. United Airlines Holdings, Inc., the parent company of United Airlines, Inc., trades on the Nasdaq under the symbol “UAL.”

For School 12 of 15 “Reconquest”
Colegio Reconquista is the public high school in the Villa Urquiza neighborhood. It was founded in 1949 and for its 73 years it has trained and educated young graduates from the neighborhood and the surrounding area, as the proximity of the station and the subway and the busyness of public transport favor a family approach. and students seeking quality education. Various types of projects are carried out: support of the school, music workshop, extended day for the main cycle (first and second year), participation in mass tournaments in physical education, training of young leaders (ONU) and educational outings.

Note: This post may contain affiliate links for which we receive economic compensation in the event you make a purchase or contract at no additional cost to you. More info.