For months, children and youth from different regions of Colombia have been preparing to speak to the truth commissioners and to the whole country. From Soacha, Tumaco, Cali, Curulao, Caloto, Pueblo Rico and many other municipalities, they came to Medellín to participate in the third truth meeting and to amplify the voice that has been silenced in a culture where adults speak.

That we have the courage to tell each other the truth, that we need the shadow of peace to rest from war, that we can reconcile, that they are told why they were victims of a war they never understood, that forced recruitment is recognized, let it be said throughout Colombia that no child is a guerrilla, paramilitary or criminal. These were, in the midst of their life stories, the messages of girls and boys, and also of adults who had been victims in childhood or adolescence.

One by one, about 20 people told the stories of the scars that the war had left on them.

We were not partisans

Jorge Eliser Arboleda was the first to testify before the commissioners and more than 700 people in attendance. 26 years. Survivor of the massacre carried out by the army against girls and boys from the village of La Pica, in Pueblo Rico, a municipality in the southwest of Antioquia. On a school field trip, they were surprised by the bullets. He saw his two younger brothers die. To his parents, divorce. She watched as her father’s mental health deteriorated and he attempted suicide. “19 years later, we are here looking for the truth so that they don’t continue to say that we were partisans. Let the names of our children be clear,” says Jorge, knowing that in the front row is Daladier Rivera, a major in the National Army, who will ask for forgiveness and promise not to repeat himself later in the day.

Three months after the Pueblo Rico massacre, Operation Berlin took place. November 18, 2000 74 children recruited by the FARC died. One of the survivors that counts. Among the audience was Rodrigo Londono. The person testifying is asking the FARC to tell where the remains of the missing, of the children killed in the war, of those who tried to escape to return to their homes are.

Doers, what do you want to be remembered for? 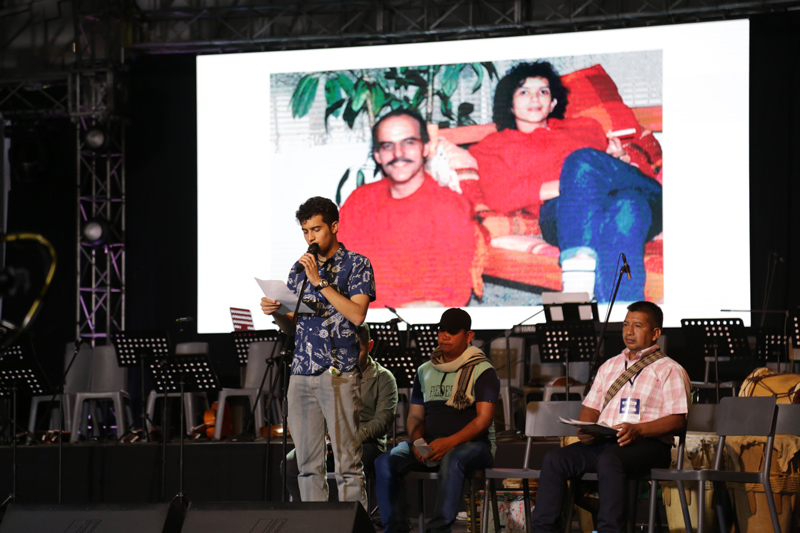 “I am a victim of the state. My parents, Mario Calderon and Elsa Alvarado, were killed without warning by mercenaries hired by paramilitaries and high-ranking army commanders […] We don’t have an infinite amount of time, and at least if we uncover the truth about how this war was consolidated, we will know it before the conflict in Colombia passes from father to son and the cycle repeats itself. Transitional justice in my opinion is the best option the victims will have to get justice in a country that already has Galán, Gaitan, Eduardo Umana, Jose Antequera, Carlos Pizarro, Jesus Maria Valle, Bernardo Jaramillo., Jaime Garçon, Carlos Alvarado, Mario Calderon, Elsa Alvarado. We have not been able to clearly reveal their executioners to any of these characters, perhaps if we point out the modus operandi of such power structures, we will be able to stop future executioners before they act”.

These were the words of Ivan Calderon Alvarado, whom Freddy Rendon, formerly of “El Aleman”, listened carefully. “You, the perpetrators, have an even greater commitment to the victims, the nation, yourselves and your families. How do you want to be remembered?

The one in charge 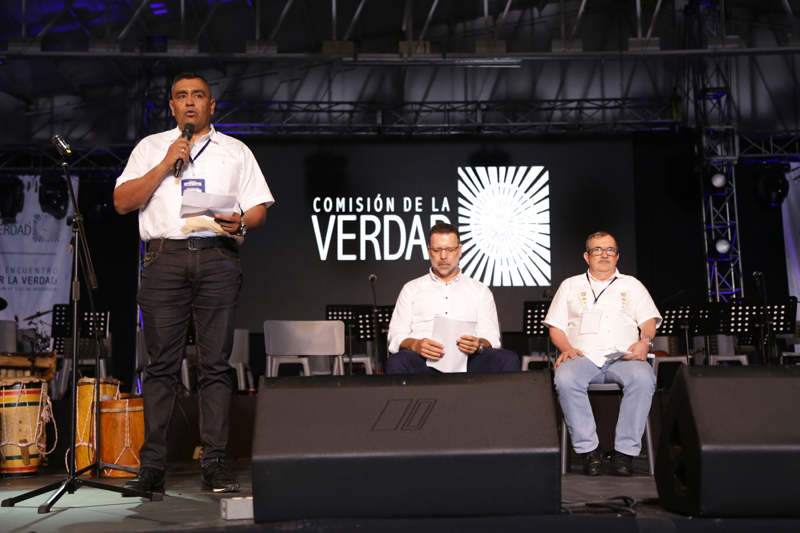 It was the first Truth Meeting in which representatives of various participants in the conflict took part. They publicly acknowledged what happened to the children and adolescents.

Rivera, Rendon and Londono. Three former members of armed actors. The first, a retired army major, apologized for the killing of Darwin, a young man who was posed as a guerrilla, is what is known in Colombia as “false positives”. The second, a former paramilitary chief, admitted that hundreds of children and adolescents were recruited and used by the groups he commanded. “We plunged hundreds of children into a maze from which many could not get out. The third party, a former top commander of the FARC, admitted that the act does not fix the irreparable, but puts it in the face of the country, and concluded with the poem “Children of War” by Alicia Pérez Hernández.

Closing the awards ceremony, Camilla, one of the presenters, said this “When we ask the state for an answer, we do not mean a military answer”. The audience gave the girl a standing ovation. The day ended with a concert.

What happened to girls and boys in the war?

A listening and reflection session

On the second day of recognition, there was a meeting to reflect on the historical, structural and contextual conditions that have allowed children and adolescents to be drawn into war, and recognized groups that through their work have contributed to the prevention, protection and resistance of children and adolescents drawn into the dynamics of armed conflict through the transformative power of art and culture.

On this second day, held at the Museum of Remembrance, also in Medellín, the Commission recognized the resistance from the art of the Corporation for Communication, Ciudad Communa, of our people – Casa Amarilla and the group Crew Peligrosos.

Commissioners and assistants heard seven more testimonies. Hernando Baron, brother of one of the victims of the massacre in Villatina. Rosa Estupinyan Obando and Rosa Estupinyan, mother and sister of Eliberto, a boy who carried an explosive charge at El Charco police station, Narinho. Nancy Arboleda, a teacher at IE Iberia, located on the outskirts of Tumaco, a school that has lost a third of its student population to the conflict. Alexandra Escobar of Tumaco, whose 17-year-old son was killed. Jose Ubaque, displaced by Lechanias, Meta because his father was from the Patriotic Union. John Fairley Ciro Ruiz, from Casa Colacho, a survivor of Commune 13. Yonis, from Uraba, who lost his mother to paramilitary groups. Juan Daniel Otoya of Cali, kidnapped with his parents and brother in Cali.

With their stories, this process of hearing, clarifying, discerning the Truth Commission continues. “It’s also the story of the things that save us. Yonis told us that he and his brothers were saved by Sister Rosa. And yesterday we were at an event attended by a former paramilitary commander who had given the order to kill Sister Rosa. And Sister Rosa was saved from this order by being with the children. This is an example of how there are no saviors or saved and the Commission is part of this process,” said Commissioner Carlos Beristán.

The commission, as in all its processes, is committed to taking this testimony into account for the preparation of the final report, both to clarify the truth in Colombia and to recommend non-repetition, so we move to call for this meeting: #NeverMoreGirlsAndBoysInWar