If you only have a few seconds, read these lines:

Latest data from World Meteorological Organization (WMO) – a specialized agency of the United Nations – reveal that the La Niña phenomenon currently being observed is likely to continue at least until the end of the year. This would thus make it the first “triple episode” of La Niña this century, appearing for the third time in a row during the spring-summer season in the Southern Hemisphere. an extraordinary event that has only happened twice since 1950.

But what is the La Niña phenomenon and how does it affect Argentina? We tell you in this note.

La Niña is a phenomenon that causes large-scale cooling of the surface waters of the central and eastern equatorial Pacific, in addition to other tropical atmospheric circulation changes in winds, pressure and precipitation, according to WMO.

As usual, has an impact on weather and climate opposite to that of El Niño, which is the warm phase of the El Niño-Southern Oscillation (ENSO) phenomenon.

The phenomenon has an irregular periodicity, usually occurring every 2 to 7 years, and is called an El Niño/La Niña phase. when sea temperatures in the eastern tropical Pacific Ocean rise/fall by 0.5°C above/below the average for several consecutive months (5 quarters).

The effects in our country are diverse and vary depending on the phase, region and time of year. In particular, during the spring and summer, northeastern Argentina tends to experience higher than normal rainfall during the El Niño phase. On the other hand, during the La Niña phase, the same area tends to record below normal rainfall, according to him National Weather Service (SMN).

However, all natural weather phenomena now occur in the context of climate change, causing global temperatures to rise, exacerbating extreme weather and climate events and changing the pattern of seasonal temperatures and precipitation.

The WMO El Niño/La Niña Today Bulletin Supports this the probability that the current La Niña episode will continue for the next 6 months is 70% for the period September – November 2022.although this percentage gradually decreases to 55% for the months of December 2022 to February 2023.

It also explains that the conditions that, since September 2020, have allowed the establishment of a La Niña episode in the tropical Pacific have been strengthened as a result of an increase in the trade winds (ie winds that blow regularly from southeast to northwest in the southern hemisphere) recorded between mid-July and mid-August 2022.

“It is remarkable that a La Niña episode lasts for 3 consecutive years. Its cooling effect temporarily slows the rise in global temperatures, but will not stop or reverse the long-term warming trend.” Petteri Taalas, WCO Secretary General.

And I add: “Deteriorating drought in the Horn of Africa (Kenya, Somalia and Ethiopia) and southern South America bears the imprint of La Niñaas well as above average rainfall observed in Southeast Asia and Australasia (Australia, Melanesia and New Zealand).”

Winter 2022 in Argentina was 33.3% drier than normal and ranked as the 7th driest since 1961 and the 5th in a row to record a precipitation deficitAccording to indicated SMN. Additionally, the city of Buenos Aires, along with those of Rosario, Junín, San Pedro, Perito Moreno and Ezeiza, recorded their driest winter since 1961, with accumulated rainfall between 50 and 100 millimeters below average.

“On average, Las Niñas are associated with drier conditions to the east and cooler than normal conditions. Although the impact of temperatures competes with the positive trends of global warming,” he pointed out Leandro Díaz, Conicet researcher at the Center for the Study of the Sea and the Atmosphere (CIMA), which depends on Conicet and the University of Buenos Aires. 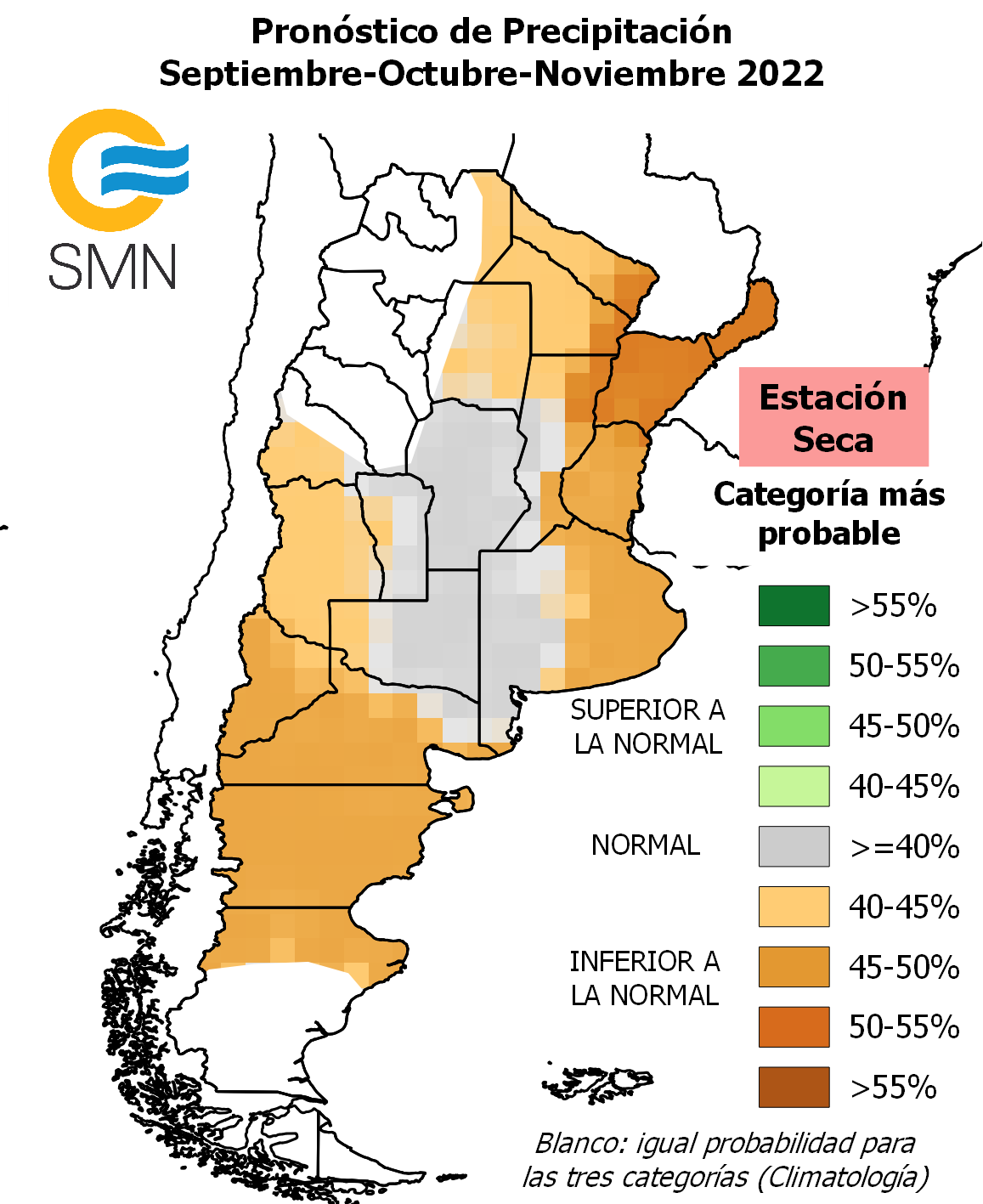 “Under this scenario, as indicated by the SMN forecast, the seasonal signal is biased toward higher probabilities of below-normal precipitation across much of the country (especially in the east and southwest). This is happening in the context of the drought conditions that we have been experiencing quite persistently since 2020.” Diaz explained. And warned:These conditions have numerous impacts that we have been experiencing for several years, such as very favorable conditions for the spread of fires, river runoff, problems in agricultural production, damage to ecosystems.

For his part, Christian Garavaglia, forecaster of SMN, held at the Meteored site: “These first trends for the end of 2022 are an inevitable sign of attention. They should be taken with caution, but given that context helps make this scenario quite likely, with above-normal average temperatures and heat waves that could begin to materialize as early as late spring or early summer.

And I add: “This valuable climate information is key to driving better advance decision-making in vital sectors such as agriculture, energy and fire management. The combination of lack of water plus high temperatures promises, unfortunately, another difficult semester”.

Did you like this note?
Help us support this project.

It is false that the man appearing in this photo is Brenda Uliarte’s father. A viral tweet is being circulated by Twitter user Diego Alzaga Uzué (@atlanticsurff) which shows that the man pictured with Gustavo Alarcon, former councilor of San Miguel of the Front of All (FDT), is the father of Brenda Uliarte, partner of Vice President Cristina Fernandez de Kirchner’s attacker, Fernando Sabag […]