Skip to content
by omeuoraculo.comPosted onSeptember 15, 2022
“Rob Werf. Vanitas” is presented until October 9 at the National Museum of Natural History

The still life or still life is perhaps the genre from which the Dutch in the 17th century allowed themselves to enter into allegory, but without breaking their tradition of fidelity to the seen. In the National Museum of Fine Arts, the artist Rob Werf (Amersfoort, 1964), with his specimen Vanitasjoins this picturesque legacy, but with an element that may seem invisible due to its everyday nature, garbage.

the Dutch checkingwho has lived in Buenos Aires for a little over two decades, continues this “Dutch tradition” and plays on its new meaning, taking another step forward in construction through the mediated eye, the eye that sees reality naked, without the ideals of metaphorical staging , but at the same time containing the allegorical side.

“The baroque motif of the transience of earthly things, which leave only remnants, traces of past splendor and prosperity, is the axis around which the range of works presented by Rob Werf revolves: an undeniably contemporary work that at the same time bridges the artistic and a cultural tradition of the Netherlands,” Penhos writes in the curatorial text.

This is seen in MRI, an image of societya choral painting composed of five individuals that commands attention, stretching across the entire wall of the room on the second floor of the MNBA. 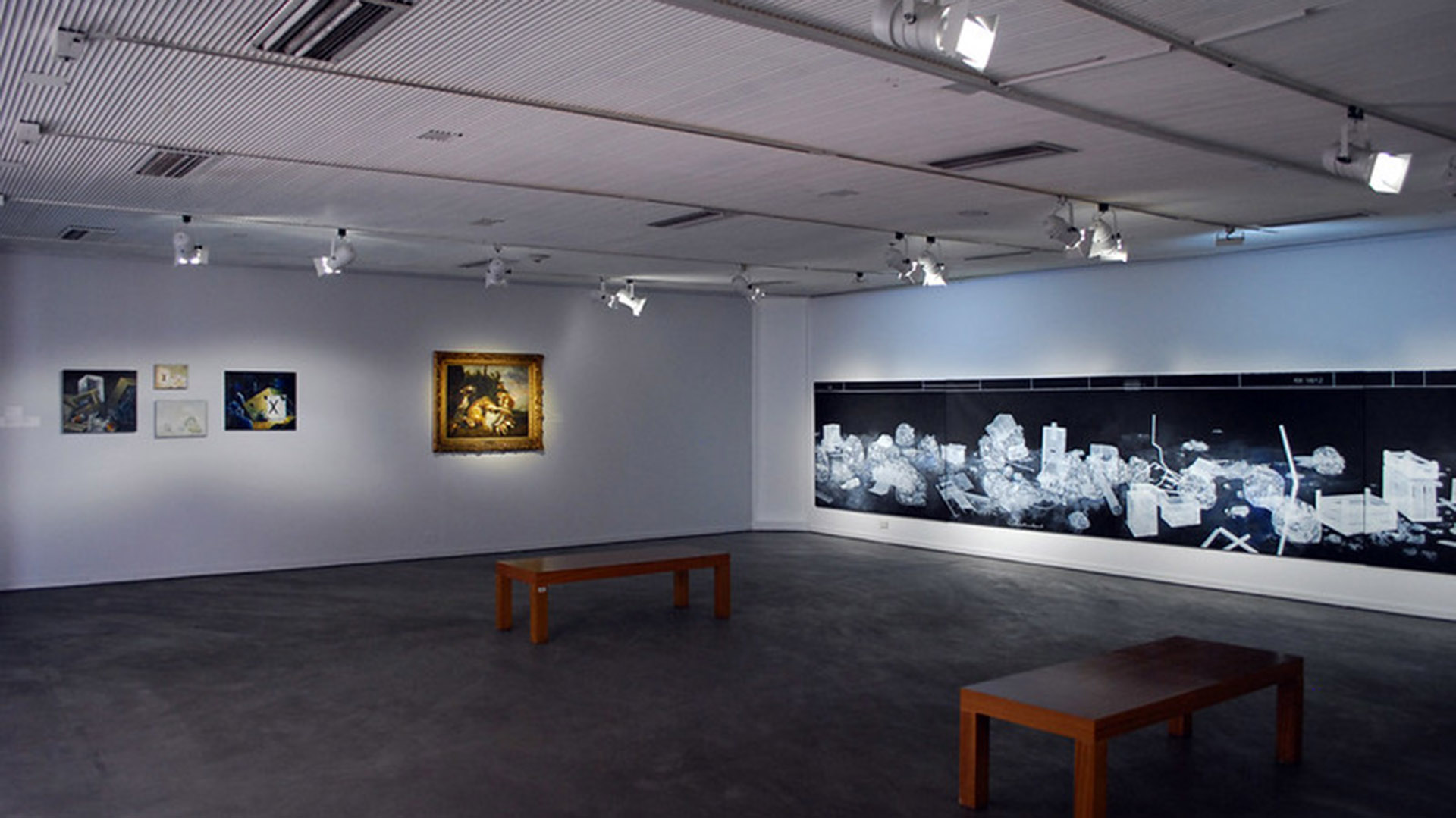 In the work, Werf makes a technological leap, no longer thinking of reality as the observation of the eye mediated by a lens, as the “ancients” did, but based on scanning technology that, like the microscope in the 17th century, creates an image that transcends the obvious.

And the theme of technology, that of science, was a crucial theme in that Dutch Golden Age. We are talking about a time when the humanist poet Constantine Huygens valued images and visual phenomena as the basis of knowledge in which the improvement (and use) of the camera obscura was developed, in which the model of the eye of Johannes Keplerand techne as a model for the art of Francis Bacon entered intellectual circles while Robert Hooke wrote his Photomicrographthe treatise in which he asserts that lenses, the microscope itself, are an indispensable aid to the eye in knowing truth.

In this sense, for a long time the painting of this moment was thought of in a simplistic way, presenting them only as interior scenes, with a certain disdain for this idiosyncratic style, which was evaluated according to the theories of the art of Italian roots, see the Renaissance as the absolute of representation and the beauty. Even Sir Joshua Reynolds argued that the works were “sterile entertainment” compared to the Flemish period.

For the most part, the Dutch put the “reality seen” before the personal or individual style, although of course they had their differences, and returning to the subject of the Vanitas subgenre, its emergence occurs in a historically religious context – let us recall that today’s Holland was Protestant, and the vanished Flanders, Belgium, Catholic, because in these works there was a message about life as a passing phenomenon, in which it was not the material that mattered, but the preparation for the future, which was nothing but life after death , salvation. 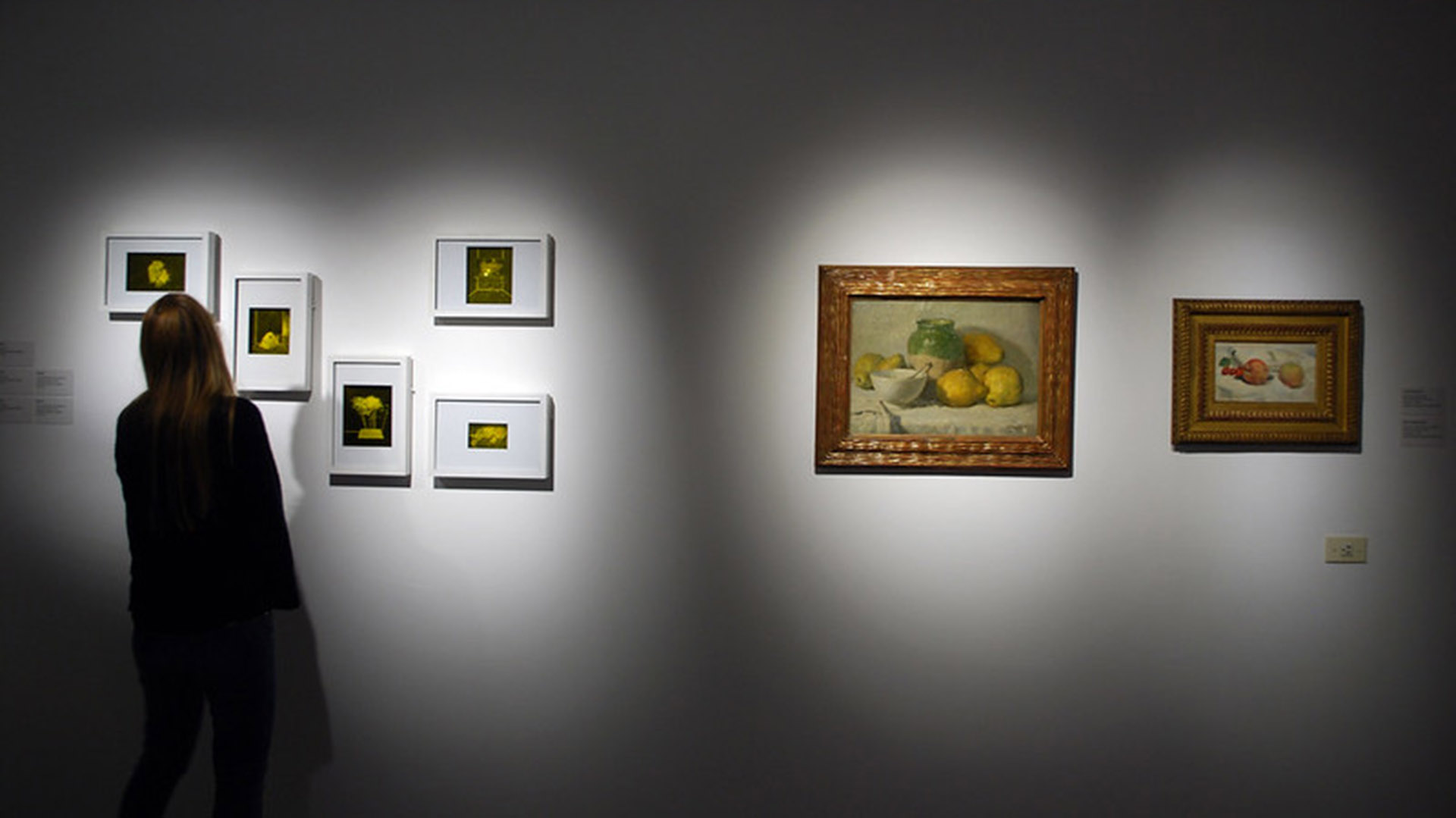 On the left, works by Werf alongside oil paintings by Lia Correa Morales and Renoir

Werf’s work not only continues the tradition of the subgenre as a modern allegory from its conceptual proposition, but from this place it no longer passes through the imaginary of the religious message; It is not about an eternal life in the afterlife, but rather a life near here: the existence of man in the 21st century cannot be analyzed by blind faith in the eternal, and his salvation will not come from the acceptance of dogmas, but from actions them in reality.

It is that garbage as a subject not only tells us about the result of the consumer habit, but also about the effect, the consequences of this way of inhabiting the planet. “When we consume, garbage is produced. The paintings are somewhat traditional and also speak a lot about society, about social life. When you look at it, it’s like we live in the garbage and don’t notice it”, explains the artist of Infobae Culture.

And he adds: “The picture is made up of these tests they do on you in the hospital. They take pictures of your body to see what is wrong or how your body is doing. Well, I paint the state of the world socially in a way that doesn’t just show garbage, but like it’s a hospital to reflect what’s wrong.

For Verf, waste can create a poetics of chaos. On the one hand, he believes that aesthetic beauty can be found outside of its meanings. “I never work with photos. For this reason, I throw out the garbage during the day and go to look at things directly on the street, I think “this object is interesting”, as if it were a sculpture, and I recorded it in my mind to recreate it.” 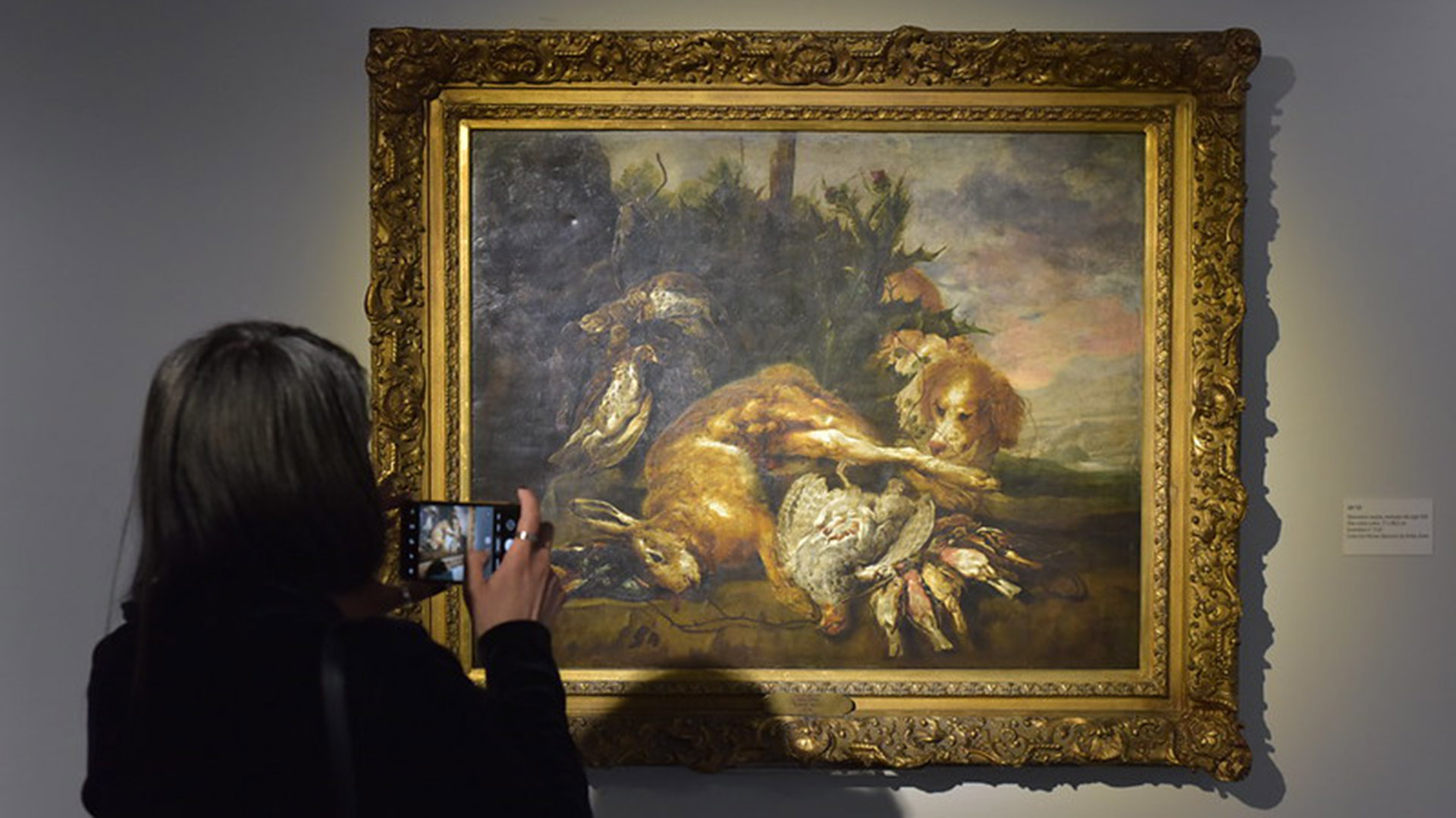 The exhibition is made up of 14 of Relph’s works, which come into play with those from the Fine Arts collection, which includes works by paradigmatic artists who, in Relph’s words, reveal how “ vanities since its inception has been a subject that artists return to” and that in this dialogue you can “see the interest and how time has changed the way it is represented”.

The curation of Marta Penjos puts on stage a series of works by famous or specialist artists on the subject, such as that of the Flemings yang fit Y Hendrik Martens Sorgboth of the 17th century, together with some small-format paintings from Renoir; Diego Rivera, Five times, Martin Boneo, Leah Correa Morales, Akhil Badior Georges Braque.

Werf’s other paintings consist of two works from the early 1990s, when he was completing his studies at the Utrecht Academy, and a few more from a few years ago. In the interaction between them, a change in the composition of light can be observed, the first being closer to chiaroscuro, in which the use of light is at the service of the dramatic, while in the more current ones it is a process of aseptic background. , which places the object at the center without ambiguity, here the dramatic is no longer the representation, but the body.

“Verf’s proposal – maintains Penhos – is part of the awareness of the temporality of all things and implies an intervention in the contemporary scenario of the discussions about the devastating effects of the Anthropocene, the era characterized by the actions of people that produce a radical change on the planet and put at risk its very existence. 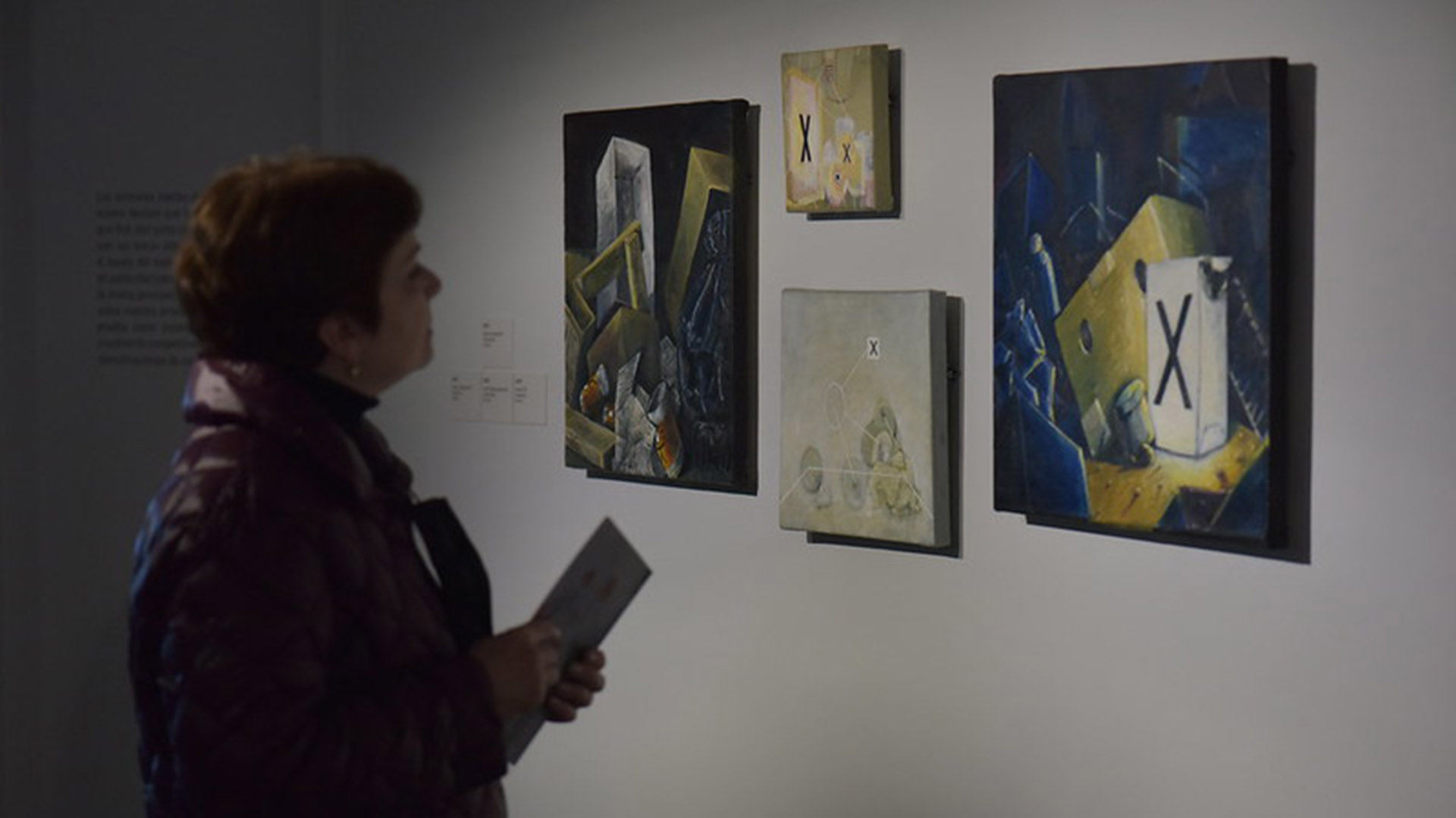 Verf works from the 90s along with more recent ones

In jobs like Still life: artificial fruit (2019) or Start of vanitas (2011) other elements of the golden age are also observed, such as the question of the perspective of Vredemann de Vriesconstructed from the use of the floor mosaic so present in the interior paintings of Vermeer, Gabriel Metsu, Pieter de Hoochand so on.

The exhibition continues with the video installation Product X, a series in which a dark liquid eats away at a Styrofoam cup after being poured into it. The X question, which can also be seen in some paintings, the artist explains, refers to the state of ignorance that exists about any product in general and the unknown consequences it can have, and in turn this can be transferred on a human being as a test subject.

“All the products we consume were once product X, because we are used to comparing a new one with another one we already know, but this was once also X. So all things are product X, but it is also a social problem, because the same thing happens with people. We consume and relate in comparison to other objects or other people. So in our way of living together, it exists as a product logic,” he commented. 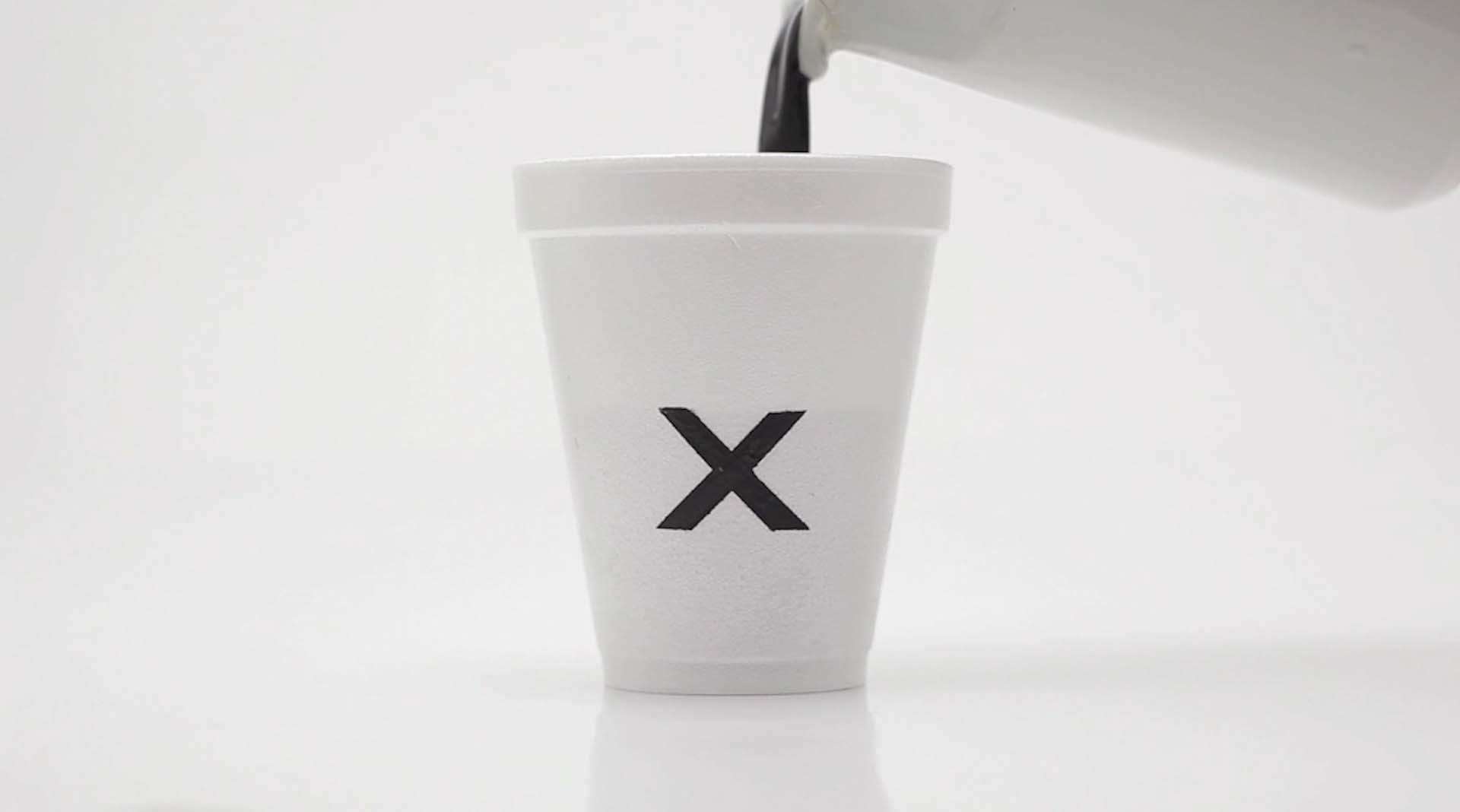 In another sector, there is another video installation of Verf’s photographs of trash as an ephemeral sculpture, and next to it a series of five small works where the debris materializes in 3D, as if the details of some of the paintings are detached from the canvas.

The pieces condense many of the elements already covered in the subgenre and are of a unique beauty, where a contrast of gold with light dark reigns, minimalistic and phantasmagorical at the same time, marking a tangible experience in the Golden Age of Junk.

The works, says Werf, are “a message for the future as well, because this is our everyday landscape. This is an example of how life on earth has changed and thus the landscape, which is nothing but a human landscape of the city.

*Rob Werf, Vanitas, on the second floor of the National Museum of Fine Arts, Avenida del Libertador 1473, CABA. With free and open admission, until October 9.

Macba celebrates 10 years with two exhibitions between space mythology and avant-garde re-reading
Where are we going in Buenos Aires?: Buenos Aires cafes and bars through the lens of Samir Macarius
Racism and colonialism: Jean-Michel Basquiat shocked Vienna with his works