When I was 10 years old I wanted to be Blossom Russo. I don’t know if you remember that wonderful series, one of the many we already told you about marked the millennial generation, in which the main character was a teenager played by Mayim Bialik. She was dark and fair skinned like me, with straight hair like mine and everything I wanted to be. He was a role model and a character that I looked up to and definitely identified with.

I was fortunate to belong to the normative group. to the middle to the standard. The most represented by the public in commercials, series and movies represented me. It could have been Elena The Vampire Diariesvalley in Companions or even Sarah inside Inside the maze (one of ours Movies from the 80s loved ones).

That’s why when I saw the reaction of these girls with the trailer of the new action movie from Little Mermaid, with a lovely black Ariel, I couldn’t help but think about what many women of my generation (and previous generations and, unfortunately, later ones too) didn’t have: role models. Characters who look like them and with whom they feel identified. “She’s like me,” they saidand I got a lump in my throat that wouldn’t even allow me to swallow saliva.

It was only then that I realized how incredibly lucky I had been as a child. I was able to fit in effortlessly and easily find my place because it was just like the vast majority. A sheep in the flock that disguises itself. A thin, straight, white, European girl who didn’t look any different. One of many, a clone presented on television in a thousand different ways, but always the same. But not all girls were like that.

A person said it at the Emmy Awards in her acceptance speech: “As a kid, I just wanted to see somebody fat like me, black like me, beautiful like me on TV.” And the singer gave voice to many women and girls. From my perspective, that’s what Ariel, played by Halle Bailey, has done.

The decision to replace a 100% fictional character (remember this is not the same controversy as with HBO’s Anne Boleyn) about being physically different gave a lot to talk about at the time. Now that the first trailer is out, a wave of racism rose as Sauron’s orcs emerged from the depths of Middle Earth.

And yes, this is a wave of racism because condemning a fictional character because he is now represented by a person of a different race is racism any way you look at it. There are people who accuse Disney of “forced inclusion”, but unfortunately this is not the only time this happens. Returning to Middle-earth, we have an example of the dark elves of the new series of The Lord of the Rings: The Rings of Power.

There are those who claim that “there were no dark elves”, to which the simplest answer is “of course, Manolo. Neither white, nor blond, nor dark-haired, nor albino, nor red-haired, because they don’t really exist.” If we’re even talking about adapting a book, and the book doesn’t mention that there weren’t other skin tones in the different races , they are still stories written many years ago, and thankfully (though little seen), we have seen something advanced. 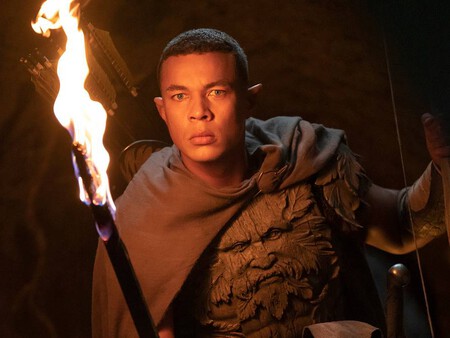 Honestly, does the fact that Ismael Cruz Cordova is playing the man who is by far the most handsome elf in Middle-earth change the plot significantly? In fact, if Legolas had followed the books closely, he would have looked more like an orc than an elf, and Orlando Bloom would not have been cast to play him. And if you don’t believe me, take a look these photos.

dear @HalleBailey 🙂 congratulations 💖🥹… the rest? Have fun in your caves 😘 https://t.co/9uuPeqY33r

Let’s imagine a child who says he wants to be an elf. He tells his parents, and they tell him, of course, that anything is possible and that if he dreams hard, maybe one day he can, even if he’s playing a character in a soap opera. Now let’s imagine that this child is black and what he actually hears around him is that “You can’t be an elf. There are no dark elves.” I can only see people clip a child’s wings because in their eyes you can’t change to grow.

“I once had a dream: the dream of being an elf. This elf dream of mine seemed impossible as they laughed at me and said, “You can’t be an elf. There are no black elves.” Here I am. Black, Latino, Puerto Rican, proud and elfin.

Is it wrong to take a good story and change the appearance of its characters to suit the new times? Of course, yes, even more so was inspired by an unreal being that never existed actually.

When as a society we only like what represents more people

Talking about Ariel with my friend Patricia, and the emotion that took over all of us, without exception, seeing the reactions of the girls, she told me that as a child she had an obsession with straightening her hair. No one on TV had his curly hair.

My niece Gabriella is not yet five and already hates her curly hair. He wants it to be smooth like all the characters he sees on TV. there is none for her curly method worth it, I prefer to think of a brazilian straightening because there is only the desire to fit in at all costs, even if you have to change something about yourself because you are differentlike in this clip from the new Netflix series you are not special.

Now characters like Merida appear brave or Mirabel is inside A charm They are beginning to represent other sectors as well. of the population as well as this new Ariel full of power.

Of course, I can’t see myself having the guts to tell my niece that she’ll never see herself portrayed on TV in one of the characters I love because they weren’t like that in the original story. “I’m sorry babe, but you’re weird and weird isn’t cool.” I rather like the idea of ​​seeing a smile on her face when she ends up equal to one of the main characters, as I did with Blossom and as thousands of black girls will, when they see Ariel on the big screen in May 2023.

One final thought: the first film of Little Mermaid It came out in 1983, 40 freaking years before the new one came out. If we haven’t changed anything in all this time, we need to take a good look at ourselves as a society.

Pictures | The Little Mermaid, The Lord of the Rings

In Trendencias | Jennifer Lopez: The 25 Best Looks So Far That Made Her a Fashion Icon

In Trendencias | Acrylates in nail polish: what they are and what are the dangers of permanent manicure