Juan Pablo he is blind from birth and has perfect hearing, with this ability, a lot of training and discipline he became one of the few musical artists in Latin America.

His work is part of a field of science devoted to the study and recording of nature’s sound heritage.

Instead of shooting landscapes with a camerado it by sound etc travels the world recording the sound of forest, jungle, sea.

“Still soundscape I do it for several purposes, one is to use it for relaxation and meditation, in that more cerebral and human part, but I also use it as conservation tool“, he explained to Diversity.

Thanks to your work, can recognize if the same natural space is being degraded. How’s it going? By how the birds sing.

“The first thing I recorded was Martín Pescador’s sound, and that opened my mind to everything. They educate the blind and say we should study law, psychology, letters and I was in this process of looking to be a lawyer when I recorded this bird and it occurred to me that I want to do this,” he revealed.

For this, he thought of becoming a biologist first, but he pointed out that: “Unfortunately, in Latin America, the education system discriminates a lot against people with disabilities. I was no exception to this and was self-taught in this branch of science. I said ‘this is my thing’ and found teachers along the way to start dedicating myself to it in a more professional way”.

Juan Pablo assures that this specialty is not widely advertised on the continent, despite the fact that South America has the greatest diversity of birds and fauna.

Each place and landscape has its own energy, conveys different things

It is among his works The birds of Iguazuwhich was recorded at Misiones, where nothing of the birds had been recorded or published for more than 30 years, and another for the Atlantic Forest.

“Something like this has never been done in Argentina and the forests, in Misiones, in Falls, suffer a lot of human pressure when they are cut and modified. We hope that people can hear these sounds live and not just from a recording,” he reflects.

Since most of the landscapes he photographs deteriorate over time, he says he tries not to return to those places. “Natural sound heritage is degrading and people don’t realize it”he alarmed.

I don’t consider myself a pure scientist, I’m a mixture of artist and science popularizer

In his work, Pablo chooses which part of everything he recorded represents this ecosystem. To do this, he spends two or three weeks touring the labor camp, looking for three or four precise recording points, away from the noise of civilization, from airplanes, from man-made noises.

“It’s very difficult when you go and talk to people and ask where there is clean sound. You have to go to the locations first, just to find those locations and make the recordings, which can take 24 hours,” he says.

“It’s an uncontrollable situation, one day you can’t record because it’s raining a lot and you always have to count on things going wrong. If you don’t research ahead of time and don’t have this information, you could lose everything. Working in nature is intense the first few days, and when I realize that I have what I’m looking for, I slow down and it becomes very beautiful, super relaxing, but it’s not easy,” he says.

How is the sound of birds studied?

Juan Pablo started recording in 2002, at that time there were not so many materials on the Internet, but he assures that there are currently many libraries, collaboration platforms that, together with the local population that accompanies him on expeditions, allow him to study and recognize the different birds.

“The Internet makes things simpler, but understanding and compiling it all is still as complicated as it was before,” he emphasizes.

Each species has three to four different sounds, and Juan Pablo memorized them allin a task that is not so easy.

His perfect pitch was an asset in this regard, but this quality was also learned as a child with piano lessons. “Music played a dominant role for many years and I have perfect hearing so I understand what the frequencies are from that moment I transpose everything I learned from the piano to memorize the sound of birds“, he reveals. 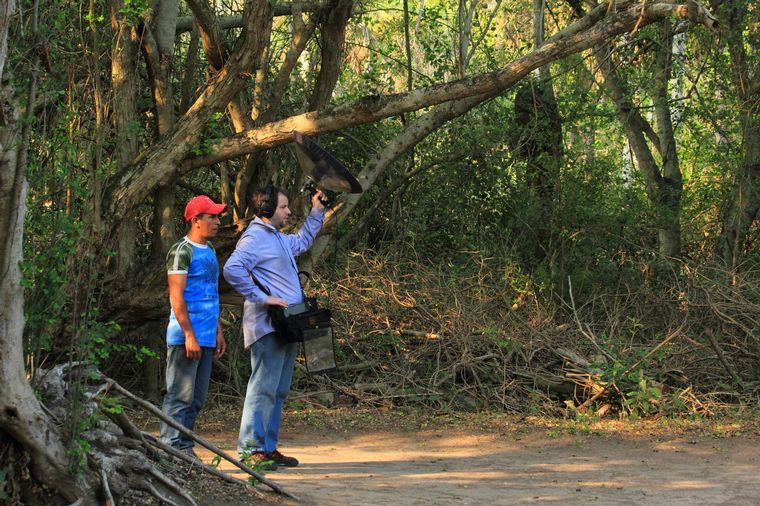 Although this is a concept that is not widely known and is being lost, few people professionally record soundscapes in Latin America.

“For every 1,000 nature photographers, only one records. We are very few and I wish there were more”, he specifies.

Among these professionals, Juan Pablo does not know anyone who is blind, but he has contacted natural sound recording experts from Australia, England and the United States who have helped him improve his technique and the work he does.

“Each jungle, each ecosystem has its own brand and sometimes I have a lot of fun in movies or series that take place in Argentina and have a European sound. There is a lack of education for sound engineers and sound designers to be authentic when it comes to designing and creating soundscapes when setting a film,” he asks.

In this sense, he said that in the James Bond movie “Casino Royale” they say they are in Africa when they hear a bird that only lives in South America.

“I always give the message to YouTubers to content generators that if you’re going to travel, do it well, also invest in sound, in capturing good direct sound, in recording nature sounds from there,” he concluded.

Juan Pablo’s work can be heard on his website https://www.sonidosinvisibles.com.uy/ and on his YouTube and Spotify channels.