The Serpent Crowned by the Rock (oolitic tantilla) is the rarest snake in North America, and scientists haven’t seen one in the wild in more than four years. And no wonder: not only does this little snake spend most of its life underground, hiding in crevices or burrowing under rocks, but only about 26 individuals are known to exist.

Now it has reappeared. Sadly, however, the elusive snake was found dead after apparently drowning on a giant centipede, a gruesome death scene.

A hiker at John Pennekamp Coral Reef State Park in the Florida Keys was the one who found the dead snake on February 28.

To the visitor’s amazement, the snake’s corpse was frozen in time, suffocating on the body of a giant centipede. After notifying park rangers of the discovery, the snake and centipede were turned over to scientists at the Florida Museum of Natural History, who examined them.

“I was blown away when I first saw the pictures,” says Coleman Sheehy, director of the Florida Museum’s herpetology collection. “It’s extremely rare to find specimens that have died while eating prey, and given how rare this species is, I would never have expected to find something like this. We were all completely amazed,” he added.

Various theories about his death

While this grisly picture suggests the snake died by choking on the monstrous meal — the centipede was a third the size of its predator — it’s also possible the snake succumbed to a lethal dose of the centipede’s venom, the researchers suggest in a new report. study published in the journal The learned naturalist.

Still, researchers suspect that suffocation is what ultimately killed the snake.

A CT scan revealed the giant Caribbean centipede was about a third the length of the snake that swallowed it.

These conclusions were made after the scientists performed a computed tomography scan of the entwined pair. Sheehy and his colleagues created a 3D model to perform a “digital autopsy” to reveal why this fight proved fatal.

“We were able to perform a digital autopsy that allowed us to examine the centipede and the snake, including their injuries and the contents of their intestines, without having to pick up a scalpel,” explains Jamie Gray, the museum’s evolutionary morphologist.

Analysis revealed that the snake – on the state’s endangered species list since 1975 – had suffered a small wound on its side, possibly caused by the centipede’s venomous bite. It is often assumed that snakes that prey on centipedes may have some resistance to their potent venom, although this remains to be proven.

In any case, the bite appears to have caused internal bleeding, but it was not the fatal blow. The scan also revealed that the snake’s trachea had been severely pinched by the ingested prey. This appears to have cut off the snake’s oxygen supply, causing it to suffocate.

Other species of crowned snakes also eat giant centipedes and other potentially dangerous prey, including scorpions, but this is the first record of feeding of any kind for this particular species, according to the Florida Museum. 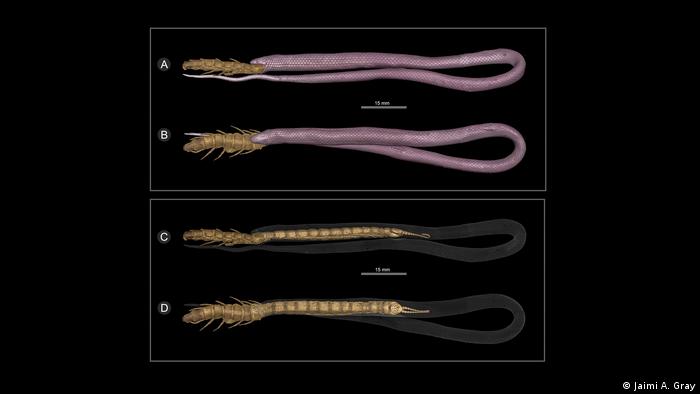 CT scan of a rock-crowned snake choking on a giant centipede.

The lifeless individual found in Key Largo measured just over 20 centimeters and although the Caribbean giant centipede (Scolopendra alternans), trying to swallow was young, the predator had eyes much larger than the throat.

Only about 50 millimeters of the snake’s food reached its throat before it choked to death; there were still 23 millimeter centipedes left.

The natural habitat of the snake is in danger

Scientists hope the findings will give us a better understanding of the anatomy and diet of the species, which is on the brink of extinction.

Much of this extinction is due to infrastructure development that destroys their natural habitat among the Scots pine ecosystems. As a result of continued development, only 2% of the original rock pines remain outside of the Everglades, creating huge problems for this now elusive species.

In 2007, the International Union for Conservation of Nature listed the rock snake as an endangered species. It has not yet received federal conservation status in the United States.