Castile-La Mancha is nature. The region contains unique natural enclaves that contain more than a hundred protected natural spaces, including two national parks and seven natural parks. Close, healthy and uncrowded places, clean and pure environment to lose yourself, rest, exercise, reduce stress and enjoy a quiet and peaceful life. And autumn is a good time to do it. On the Castilla-La Mancha Protected Areas website you can find comprehensive information on all these natural enclaves.

Castilla-La Mancha allows nature lovers to calmly discover valleys, mountains, rivers, canyons, holes, ravines and lagoons that make up a fantastic setting, ideal for contact with nature, disconnection and practicing active tourism. And if you are also a fan of mushrooms, you will especially enjoy these parks, which stretch over more than half a million hectares of the regional territory.

The possibilities for nature in the region are endless. In the extreme north of Castile-La Mancha there is an area that appears to be made of pieces taken from the Alpine mountain range and the German Black Forest. It is a green, wet and dark world, with high mountains, steep and deep valleys and dense forests. This is the Sierra Norte de Guadalajara Natural Park, with an area of ​​118,000 hectares, which is home to the cities of black and gold architecture, where instead of slate, a local stone with a high mica content, reflecting the sun, acquires golden and brilliant color tones.

The spectacular Pellegrina Sickle is located in the gorge of the Rio Dulce. – Photo: ©Turismo Castilla La Mancha / David BlázquezThe Sierra Norte Natural Park can be enjoyed all year round, but it is particularly welcoming to walkers who love autumn, especially in its last weeks, shortly before the arrival of the snows, when the forests offer the traveler a symphony of reddish tones and the sound of the leaves that rub in the boots, accompanies each step. In these dates, it is essential to visit the Tejera Negra beech forest in Cantalojas, a botanical treasure that has survived to this day. If you want to know more about the Sierra Norte Natural Park, you can consult its visitor guide.

Without leaving the province of Guadalajara, we also discover the Barranco del Río Dulce and its spectacular Pelegrina Gorge. A must stop is the view dedicated to Felix Rodríguez de la Fuente. This balcony above the Hoz allows a wonderful panoramic view of the Barranco del Rio Dulce and recalls some of the scenes recorded by the naturalist in which the griffon vultures, the golden eagle or the wolves were their protagonists.

Naturalearing through Guadalajara should also take you to quietly enjoy the Alto Tajo Natural Park, which has an exceptional landscape shaped by its hydrographic network, in which river canyons and gorges stand out, as well as unique hill shapes, such as knives, needles and monoliths on limestone rocks and mostly red sandstone, in which pine forests abound, as well as riparian forests. Its impressive geology, representative of the Paleozoic and Mesozoic periods, made it worthy of being declared a Geopark by UNESCO. Exploring the park along the GR-113 trail, formed by the Tajo nature trail, is a great plan that will make you enjoy the amazing nature of this natural space that continues in the Serranía de Cuenca Natural Park. 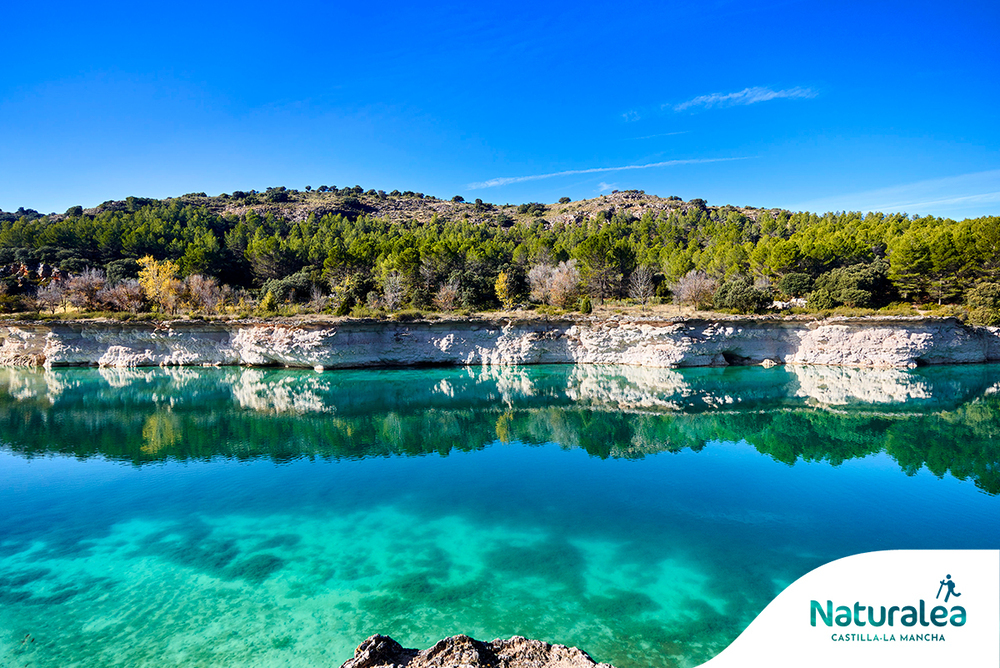 CONQUER THE MOUNTAIN. Serranía Cuenca, at the crossroads of the birth of two of the most important rivers of the peninsula, Jucar and Tajo, which together with their main tributaries -Escabas, Cuervo, Valdemeca, Arroyo Almagrero-, allows you to enjoy the beauty and tranquility that can to breathe in the upper reaches of these rivers, with the purity and sound of their waters and the incredible nature of their riverside vegetation, which reaches its maximum splendor in autumn.

The slow but unstoppable action of water currents is the basis of the orographic conformation of this natural park. In its perimeter you will see one of the most important representations of the peninsula of the geomorphological formations obtained as a result of the action of winds, water, frost, … on the limestone-dolomite base, the so-called karst, which has the most spectacular images in tormagales and lapiaces of the Enchanted City and the alleys of Las Majadas. Limestone cliffs – among which the closure of the Muela de la Madera in the town of Uña stands out – or travertine waterfalls of particular beauty such as that of the Molino de la Chorrera de Tragacete, a worthy imitation of the nearby source of the Cuervo River are other of its charms. The park is a Starlight destination and has resources to fully interpret and enjoy its starry sky.

Autumn also offers you an excellent opportunity to visit the Hoces del Cabriel nature reserve, which at this time of the year with mild temperatures, in addition to its incredible geology and the color of the river waters, acquires the beauty of the autumn colors of its riparian forest that occurs and in the nearby Natural Monument Chorreras del Cabriel with its spectacular waterfalls and tufas of great scientific interest, it is an excellent time to visit them and walk their paths with the vocation to enjoy the landscape… 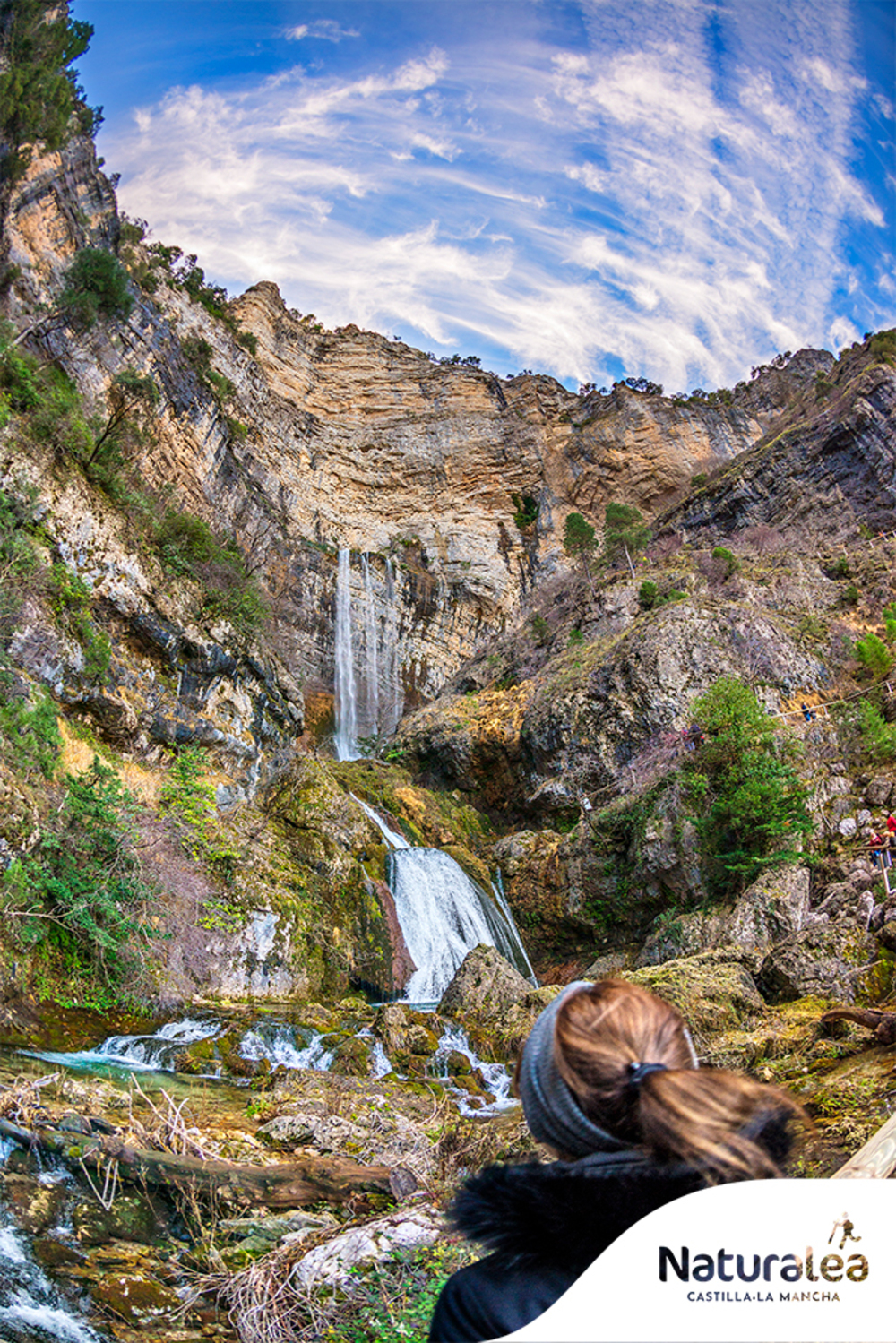 The Mundo River rises at its source through a cliff over 300 meters high. – Photo: ©Turismo Castilla La Mancha / David BlázquezIn the central and southern areas of the community, we find excellent destinations for continuing nature. For example, in Campo de Montiel, halfway between Albacete and Ciudad Real, we can enjoy autumn in the Lagunas de Ruidera Natural Park, which, away from the hustle and bustle of summer and bathing, offers excellent opportunities for walking along its pleasant and easy paths , its new infrastructures, such as the scenic route or the new interpretation center in Laguna de La Colgada, which facilitate the enjoyment on foot and by bike of the entire park and the contrast of the turquoise blue of its waters with the yellow and autumn ochres.

In the south of Albacete, the spectacular karst formations of Calares del Mundo Natural Park and La Sima are a must-stop destination at Los Chorros, a spectacular waterfall that forms smaller waterfalls as it descends as the river flows into the so-called -called “Calderetas”, pools at different altitudes.

If you want to discover and enjoy cave paintings in addition to enjoying an impressive natural environment, your choice is the Natural Park of Valle de Alcudia and Sierra Madrona, a paradise located in the province of Ciudad Real to enjoy nature in its pristine state, which stands out for its exceptional archaeological heritage, especially the cave art of the Mediterranean Arch, represented in the paintings of Abrigo de Peña Escrito, La Batanera or Escorialejo. Its spectacular starry sky is worthy of being considered a star destination.

As you can see, there are many opportunities for Naturalear in Castilla-La Mancha. If we have convinced you, contact the nature tourism companies in the area that will help you discover, appreciate and enjoy each space. You can also consult Vive Tu Espacio for all the dates and times of the activities designed to raise awareness and educate the environment that will take place in the various natural enclaves of the region. The programs, which started on September 3 and will end on October 30, offer for example geocaching, bird watching, orienteering competitions, nature art or cycling routes.

SUSTAINABLE TOURISM: ENJOY AND TAKE CARE OF NATURE IS IN YOUR HANDS

Enjoying and taking care of nature are not incompatible and it is in your hands. This is the aim, for example, of the “Red Natura 2000” sustainable tourism seal, which has already been applied in the Sierra Norte de Guadalajara Natural Park, or of the European Charter for Sustainable Tourism, which is already in force in the High Tagus Natural Park.

In Ciudad Real you can enjoy in the Valle de Alcudia and the Sierra Madrona Natural Park a spectacular starry sky that makes it worthy of being considered a star destination. – Photo: ©Turismo Castilla La Mancha / David BlázquezProtecting natural values ​​is everyone’s task. As a visitor, it will give you the satisfaction of contributing to the preservation of the unique environment that connects us to nature. For this reason, as tourists, we must distinguish those tourism spaces and companies committed to sustainability that contribute to the protection of the environment in a practical way. Our choices will help make optimal use of environmental resources, support essential ecological processes and help conserve natural resources and biodiversity.

But the benefits are not limited to visitors, as tourism companies themselves benefit from the conservation of some resources that are the basis of their economic activity. Ensuring viable long-term economic activities will bring to all agents well-distributed socio-economic benefits, including opportunities for stable employment and income generation and social services for its residents.

In the same way, the manager or owner of the space is guaranteed to be sure that the nature tourism activity carried out in his space is compatible with the favorable state of conservation of its natural values ​​and contributes to sustainable local development, which means progress in the conservation of socio-cultural authenticity of each enclave, preserving its cultural and architectural values ​​and its traditional values.

In Campillo de la Ranas we can enjoy the black architecture. – Photo: ©Turismo Castilla La Mancha / David BlázquezWhen choosing a destination, bet without hesitation on sustainable tourism. This is without a doubt a key tool for raising awareness and promoting positive environmental behavior change. In Castilla-La Mancha, there are now numerous travel companies and accommodation that adhere to these sustainability seals. Look them up to live your experience!