It’s only 7:30 a.m. in the Kouchagine-Moura refugee camp, near Chad’s border with Sudan, but the thermometer is already nearing 40C.

Despite the heat, dozens of girls and boys gather, take off their shoes and sit on a large carpet under the sparse shade of a bare acacia tree. In front of a large blackboard propped against a log, a young woman in a flowing pink dress and headscarf greets the children and motions them to sit down.

Asania Ahmad Hussain, 28, is a primary school teacher at Alnur School – one of two in the camp – and leads a class of more than 100 girls and boys between the ages of 5 and 7. Originally from Gnuri, in Sudan’s Darfur region, Assania came to Kuchagin-Moura just over two years ago with her husband and son after fleeing inter-communal violence.

A psychologist by training, she values ​​learning, which she sees as a defense against conflict and extremism.

“My career has been marked by repeated and indiscriminate violence, which I believe is the result of ignorance,” he says. “I am convinced that access to education and knowledge for children will help break the cycle of violence in Darfur.”

Kouchagine-Moura camp hosts around 14,000 Sudanese refugees who have fled the fighting in Darfur since February 2020. In addition to hosting and protecting refugees, UNHCR, the UN Refugee Agency and its partners are ensuring children have access to education by including them in the Chadian national education system and providing infrastructure and materials.

The agency oversaw the construction of two schools with a capacity of 2,500 students, with 24 toilets, two solar-powered wells and four staff rooms. Together with the Jesuit Refugee Service, UNHCR trained a team of 39 teachers from the refugee and host communities.

The camp also offers an accelerated education and literacy program for youth aged 12-23, which currently includes 108 refugee girls and 61 boys who have never attended school.

But despite these investments, as the camp continues to grow – with almost 4,000 new arrivals since the start of the year – officials highlight the tough challenges they still face. The average primary class capacity is 163 students, with 10 of the 17 classrooms in the two schools being open-air due to lack of space. 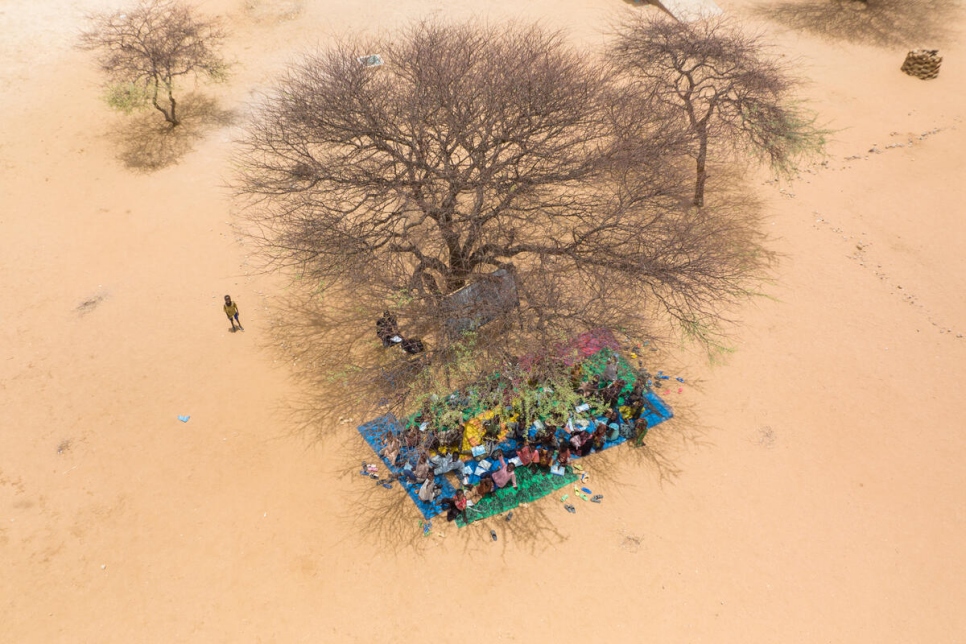 Sudanese schoolchildren attend an outdoor class in the Kouchaguine-Moura refugee camp in eastern Chad. Despite the new construction, the camp school does not have enough classrooms for all the children. © UNHCR/Colin Delphos

In recent years, Chad has become one of the most inclusive countries in the world when it comes to refugee education. In the 2020-21 academic year, over 100,000 young refugees were enrolled in formal education, more than ever before.

However, with renewed conflict across the border in Sudan forcing more people to seek safety in Chad, the pressure on an already overstretched system will increase. The main factor preventing UNHCR and other UN and NGO partners from scaling up their response is a severe lack of funding, with the $510 million (USD) 2022 Humanitarian Response Plan for Chad only 22 percent funded . The education component of this plan has received only $2 million (USD) of the $34 million needed to address the needs of refugee children.

Beyond capacity constraints, teachers are also alert to the risks of absenteeism due to the poor living conditions of many families in the camp, as Brahim Tahir Arabi, a Chadian teacher from the host community, pointed out.

“We need to make sure that children have a healthy and balanced diet,” he explains. “Some students don’t come to school because they don’t have proper shoes or clothes.

For Assaniah, building new classrooms is a top priority. “Although trees provide shade, they are not as effective in protecting students during the rainy season,” he says.

But her outdoor classroom is still a beautiful place to learn, where girls and boys pay close attention to their teacher’s words. “It’s a place of teaching and leadership,” Asania says. “From the youngest to the oldest, the children are in harmony, as if they all had one mother and father. There is no disagreement: we are all refugees.

This story was published ahead of the UNHCR Education Report 2022, which will be published on 13 September. The report is part of the UN Refugee Agency’s participation in the Transforming Education Summit, which will be held during this year’s UN General Assembly.