However, emergency rules and negotiations – as dry as ever – with the IMF continue at the moment. It works all weekend. The goal? To improve a document that IMF staff must present to the boardwhich may lead to the approval of the second revision of the objectives that appear in the agreement.

Official sources told Ámbito that these talks were of a purely technical nature, therefore not political. This, despite all the support capital received by the Minister in recent days, both in the White House, in particular the State Department, but also with multilateral organizations such as the Inter-American Development Bank (IDB) and the World Bank. , where he received the promise of immediate transfers from steps that unlocked previously established agreements.

Massa’s idea is not to call these implicit guarantees into question of a political nature, patiently cultivated until necessary: ​​he wants to consolidate a view of consensus with the IMF staff, a path that allows him to look ahead.

Working with the Fund on the second quarter review

“The program with the IMF has objectives and we must work to achieve them because this is part of the commitments that Argentina has made as a country,” said the minister of Ámbito. “This puts us under the obligation to make these commitments and to do it as a responsibility of the government. We are doing technical work from all areas of the Ministry of Economy together with the technical areas of the IMF to close the second quarter review and build the future document as the IMF sees it and as we both see it going forward. And I think in that sense, last week was goodas far as I understand because of the information that was communicated to me in the team,” the official said.

It is clear that some of the most sensitive points in this discussion seem to lie close to the commitments made regarding accumulation of reserves. In relation to this point, and after adding the support of the IDB and the World Bank, attention is also focused on what has been achieved in the last week with the brand new soybean dollar.

SERGIO MASA IN THE UNITED STATES.jpeg

“The agricultural stimulus program has a beginning and an end, but there is also a liquidation commitment of $5,000 million,” Massa said. “If we evaluate what happened, compliance was exceeded in the first week and I understand that this encouraged pricing. Also, based on the information I received, the level of operations for Monday, which is pre-registered, remains high,” he told Ámbito.

The war and its consequences

Massa’s idea is that outside of the negotiations with the IMF, the goal is and should be in the future and at all times to accumulate reserves in the BAKR, because according to those around him, the official thinks that, among other things, it is also management guarantee.

Regarding the IMF’s demands, for the government there are two factors that need to be brought into the equation: on the one hand, that the agreement was signed some time before the economic consequences of the war between Russia and Ukraine, which could allow for new talks in the near future future, but not by the government, but by the organization itself and even within the UN.

On the other hand, this the implicit costs in respect of reserves that are not integrated one can theoretically calculate if the US$9 billion swap with China, the US$6 billion swap with Russia, the US$1.2 billion in payments from China that were not made for the dams, and even the US$1,700 million that were delayed by the IDB and that Massa himself was able to unblock now. To this can be added almost US$5 billion in energy costs.

Regarding his passage through the White House, Massa maintained, “It was an agenda of meetings related to matters of energy and food security which are part of the agreements of the Summit of the Americas and the G-7 agreement in which Argentina participates”.

The meetings were held with key officials from Joe Biden’s administration: the national security adviser, Jake Sullivan; John GonzalezSenior Adviser for Latin America and Mike Pyle, deputy economic adviser to the National Security Council. “Obviously there have been discussions about what is the best scenario, understanding that the war generates an impact on the world economy that we cannot but put on any discussion table,” Massa told this outlet.

SERGIO MASA IN THE USA.jpeg 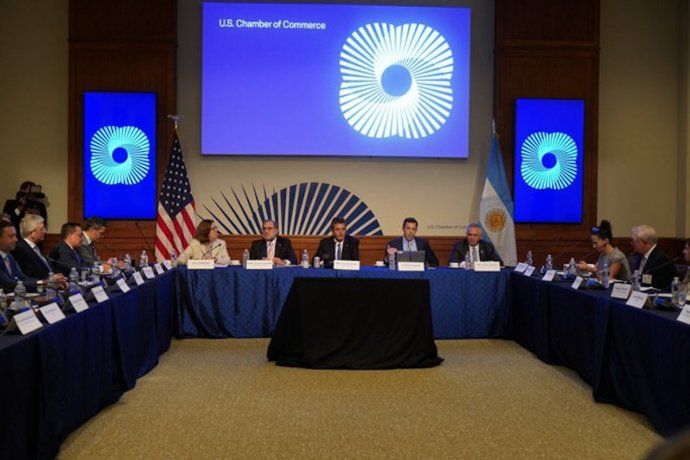 “International energy prices condemn Europe to a scenario of huge economic and political instability, they put us to the test for 2023 in the challenge of having a very ambitious program but also a very professionally developed for prevented Argentina from continuing to import the levels of LNG it should have purchased“, he added.

According to the minister, “the world has four main issues that are being discussed in the next two years: critical minerals, energy, knowledge economy and proteins. Argentina, beyond the difficulties it has today, has a huge opportunity in the long term.”

The conference, held this week at the Baker Institute, Rice University, left enthusiasm. The main recommendations of the oil companies present were in favor of the regulatory and fiscal framework proposed by the minister.

“In the short term,” Massa said this morning, “we have the responsibility to establish a production volume for next winter that allows us to increase the number of molecules because we need the highest level of production in the local market with prices that are much more competitive’.

“We need to plan for 2023 based on an extension of the Gas 4 plan, while at the same time implementing the Gas 5 plan to guarantee the filling of the gas pipeline and that requires investment that should start to materialize in November with a view to increasing production capacity.” Along these lines, Tigrens pointed out that “there is a pipeline that is underutilized in terms of its capacity in the Australian Basin, so the incentive should try to add gas production in the north of Argentina”.

In turn, he claims that, in parallel, “for the next winter we must defines the business model with Bolivia and the electricity transaction model with Brazil“The objective is, according to Massa, to reduce the number of LNG import vessels, but also to speed up the operation of the Néstor Kirchner pipeline as much as possible, “because this is key to achieving this objective”.

In this line, he again insisted that “it is key to move forward in Congress with the treatment of energy production as a state policy, with the search for consensus between the ruling party and the opposition, both the law that regulates the tax breaks and the legal stability and tax on the liquefied natural gas plants that Argentina needs, as well as the hydrogen plants and a short law that ends up consolidating a process of stability and availability of foreign currency for the gas and oil sector”.