Andrea (27 years old, Concordia) writes to us: “Luciano, I am writing to you because I have never read you a clear opinion about social networks. What do you think about virtuality? How do you think it affects love?’

Dear Andrea, I have written many times about virtuality, but it is true: I do not have a clear opinion, because its “impact” – as you say – is constantly changing. What I know for sure is that today’s love is not always love, but on the Internet it is a different, technological love. Then I’ll tell you the last thing I thought about it.

Let’s start with a phrase: “Hell is other people” is a well-known quote by Jean-Paul Sartre. However, it is not the same for the other to appear with his physical presence as for him to do so through a screen. It is true that the other may appear in a presented way, for example, when I am ashamed, and then it does not matter that the other is physically in front of me; his presence is equally effective.

“It is a lie that I am a gentleman when no one sees me,” says Joaquin Sabina’s famous song, which in turn illustrates another of Sartre’s ideas: that the other is in the gaze, that it is not his eyes, but that effect – for example, the shame to which I discover my vulnerability.

The other looks at me, decides a part of my being, as when in a discussion someone says “What is happening is this” (in an absurd reference to the facts) or “because you” with an irreparable fixation on the idea that I have of myself, which I can and want to discuss. “What do you see when you see me?” says another famous musical lyric.

Now, if technology has brought anything, it is the ability for each person to see what the other sees. In a WhatsApp video call, in a small box we see ourselves, perhaps much more than the person we are talking to. The same happens in other communication applications; not to mention its precedent in the so-called “selfies”, those self-portraits that are never one, but several, to choose the one we like best.

Technology has given us the ability to imaginatively illustrate the Freudian notion of the superego through a constant view of ourselves. Not just any gaze, but one that – like the superego – judges us more harshly; seeing ourselves technologically, we even lose the aesthetic or desirable dimension of the image, we also imprint a moral dimension on it: when we see ourselves, we want to see if we are worthy of being chosen by others. 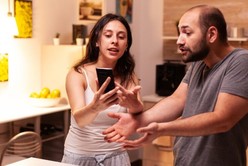 Why do we check our partner’s phone?

I put it another way: in times when I was not so easily seen, desire (as something that comes from outside, through the gaze as something foreign) was the main way one paid attention to oneself. For example, on the street I start talking to a stranger (I ask him about the time) and, faced with his distance or coldness, I later notice that I was somehow disorganized, and maybe that’s why the other person passed or left soon.

What happens in a love app? First – let’s give all its weight to this expression – I see myself, then I think that if the other does not stop, it is because something is wrong with me, something I am doing wrong, I feel guilty if I am not chosen; I do not need to induce desire, but to reduce the guilt that my own way of seeing produces in me, that is, to know that I am not rejected.

This seems to me to be an important aspect: the applications do not suggest a user of desire, but a fundamentally guilty, superegoic, possibly melancholic one. Now, because of this basic melancholy, the user of applications – of course, I’m not generalizing, I’m not saying that everyone uses them in this way, but rather I pay attention to one recurring coordinate in different cases – does not base his relationship with these devices of more than getting chances. It is not about taking a desired position and moving forward, but knowing that this is possible is enough.

For some time now, isn’t it curious that the dating apps made lead to less and less meetings and that many people are enough to chat, with the confirmation that the other is on the other side? “Someday we will see each other” and so we “talk”, but more and more people say: “He doesn’t want anything, I don’t even know why we talk”.

Apps are a great option. Each collects options and becomes an option for another. We might think that the reason for this passage is a growing narcissism, but to speak of narcissism in a broad sense is not a specific type of response. I posited a narcissistic variant: melancholia, and now I think we can mention a second narcissistic condition: paranoia.

In applications, the viewer wants to see what the other sees; rather, he wants the other to see what he sees. This structure can be transferred to thought: that the other thinks what I think or, better said, the thought of the other can be determined by what I think. This is typical of paranoia: me, me, me, and the consequence of this is the situation of those who cannot tolerate the other doing something and not knowing very well why what is happening is happening. The paranoid lives by concluding: if he hasn’t answered me, it’s because he doesn’t care about me, because he doesn’t love me, because… but how much can you care or how much can you love someone I don’t know? It’s true, you don’t care and you don’t want it, but what do you want? Let him answer you. Why? Because if you don’t fall back into your melancholy.

Paranoia and melancholy are two sides of the same coin, for the subject without desire in the app world. That so many people fail to use it may be a sign of resistance, a way of not allowing themselves to be subjugated by this machine. The problem is that the price of giving up obedience is ever-increasing disappointment. 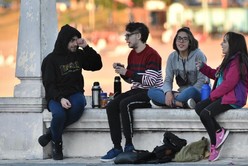 “I don’t know you, but I love you just the same”: how the virtual has reshaped friendship after the pandemic

These short lines, Andrea, are far from exhaustive; Rather, they are an exploratory exercise in raising the question that seems to me important when we talk about these types of applications is: what kind of subject do they imply? To what series of pacts and refusals are they pushing him?

Thus, instead of thinking about the effects themselves and, for example, looking for the development of the behaviors that the applications encourage (in general, these are always terms in English), it is more interesting to think from the effects to its conditions; “more interesting” because it thus leaves a classificatory morality based on prior judgments as well as prescriptive ideals.

In other words, the note of frustration that different people experience using apps because their promise of dating turns out to be clumsy and unsuccessful is not a contingent result, but rather a modification in the way love is experienced. Living in this world – in which we are offered or, outright, sold – there is not much chance of survival, except to develop a cynical seduction or reactive mistrust, which, by the way, are not very facilitating.

A friend recently told me about a simple situation. Make an appointment through an app, and when you get to the bar, confirm that the guy doesn’t look that much like the one in the photo (who is he?); however, he remained a few minutes: after a short conversation he found that things would not go very far. So he decided to go to the toilet and a few minutes later he decided not to come back from the toilet. He left the bar. Already on the street, he wrote a message: “Sorry, I had to go.”

Is it wrong? I couldn’t judge her. When we talked about it, it occurred to me to ask him what would have happened if that was the person who did it. I do not mean the famous: not to do unto others what we would not have them do unto us. Rather, it is about reflecting on the conditions for such an act: without a dose of impersonality, how do you deal with disagreement? After how many dates can it be said to have any mutual meaning? It’s not that apps show us as disposable; on the contrary, the possibility of disposal is a condition of its use, the opposite of which is the demand: “Show me that I am not waste.”

With apps, we no longer depend on knowing the other, but on the other being there and eventually responding. It doesn’t seem like an appropriate context for modesty, much less shame, and therefore being bothered by the other’s gaze.

There is no more sight; we are one-eyed in the kingdom of the blind, who complain that the other does the same thing we would do, but without even acknowledging another, who, if he exists, is only because his desire bothers me. If we continue to think of relationships in terms of how to reduce discomfort, these provisions will not be healthy or gratuitous: the (unconditioned) outcome will be an increasingly unaffected object of desire.

This is what the apps show: people who only want to love, but don’t want the other to want, less if they want something other than what they want, that they don’t want, because “wanting to love” is enough for them. I don’t want to discourage you, Andrea, but sometimes I think hell is us.