The Senate of the Republic approved in the first minutes of this Friday, September 9, the initiative of President Andrés Manuel López Obrador (AMLO) regarding the integration of national guard to the Minister of National Defense (Seated), a highly criticized initiative.

Because it is said to contribute to the militarization of the country by leaving the armed forces in charge of public security despite the controversies involving Sedena.

The most recent, the murder of the minor Heidi Mariana Rodriguez, possibly in the hands of military personnel who were facing criminals. The 4-year-old girl was shot in the head when the caregiver transferred her to IMSS Hospital to be treated for pain.

The unit has also been accused by relatives and representatives of trying to silence the family’s demands for justice and shift the blame onto the armed forces. 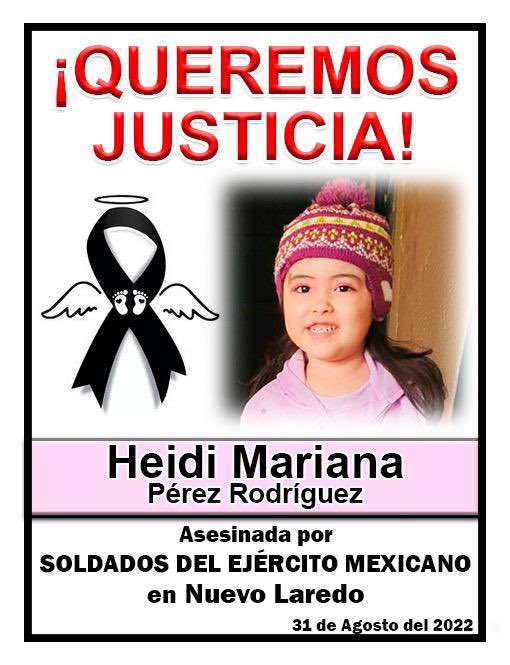 Relatives allege that Sedena soldiers opened fire on them during a confusing moment of pursuit, causing Heidi to be killed by a stray bullet (Image: Special)

Cristina Araceli Perez Rodriguezmother of the minor, condemned the Human Rights Committee of Nuevo Laredo (HRC) he was harassed by a Sedena employee last Tuesday, which asked him to stop making statements confirming the institution’s responsibility.

Through Raimundo Ramoschairman of the Committee, condemned the presence of military elements in front of his home, in addition to the visit of an official from Sedena, named Emilio Carballo Ruizwho appealed to him to stop denouncing the military.

In return, the unit can give them psychological or financial support.

“This mention is to ask the Minister of Defense to stop bothering Mrs. Christina, Mrs. Griselda (who was driving the car on the day of the crime) with their financial offers, with the intention of silencing the voice that cries for justice. ”, Raimundo Ramos insisted.

This was announced at a press conference in Agustin Pro Juarez Center for Human Rights (Center Cont), where the mother of the minor was together with her legal representative Edgar Neto, director of the Central Bureau of Investigation and Santiago Aguirre Espinosa Director of the center.

There they talked about the crime that the armed forces were involved in as being primarily responsible for Heidi’s death and revealed some facts that their investigations showed.

The family’s lawyer assured that the FGR investigation shows that it was a fatal attack on the vehicle (photo: Centro Prodh)

The director of the Central Intelligence Agency explained that so far there has been no evidence of a clash between the military and members of criminal groups, as the agency and AMLO assured, and there are no damaged facades or other vehicles with bullet marks.

By your side Edgar Neth announced that the inspection carried out by the General Prosecutor’s Office (FGR), indicated that the vehicle in which the victims were transported had bullet marks on the roof and medallion, with no damaged tires, indicating that the troops intended to take the drivers’ lives.

“Bullet impacts are on the roof and on the medallion, evidence of a deadly attack aimed at those inside the car.”

He also mentioned the contribution of a video from Sedena, with which the agency claimed that the military vehicle was on another street, attending a confrontation in a different location, which it accused Sedena he’s just trying to get off the case. 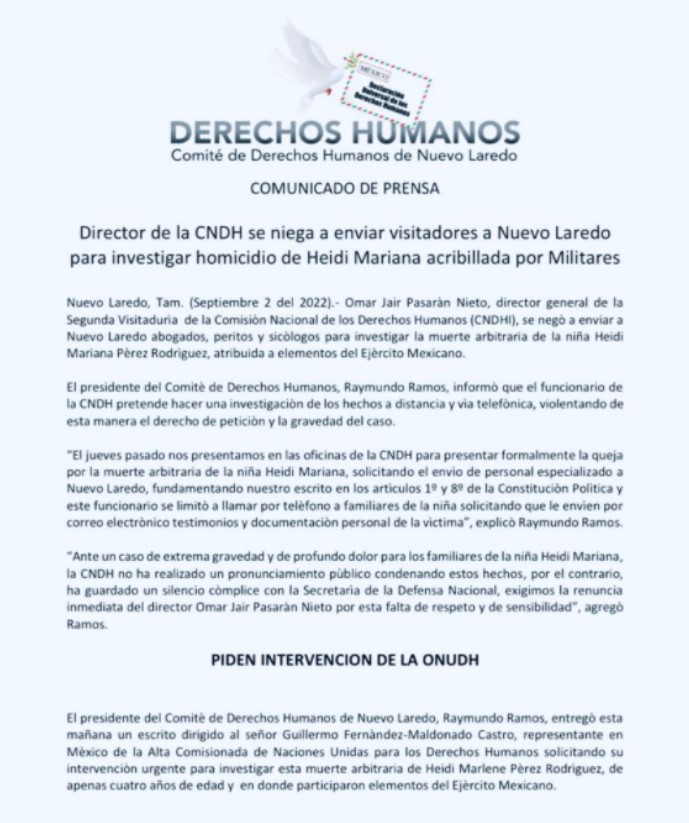 The CDH condemned the CNDH for not adequately investigating the case (photo: Twitter)

On the other hand, Raimundo Ramos stated that the government has abandoned Heidi’s family because AMLO did not respond to the family’s request for a private audience with him. They also mentioned the silence of the Ministry of Internal Affairs (SeGob), who was asked to mediate in said hearing.

Well, last September 2, CDH convicted this Omar Jair refused to send to visitors to Nuevo Laredo to investigate the fact.

The statement said that apart from the official plans to do the survey over the phone and remotelybecause when he contacted the family, he limited himself to asking for their statements and the official documents of the minor.

The above was described as insensitive, for which they demanded Pasarán’s resignation. They also announced that they would be in touch Guillermo Fernandez-Maldonado Castrorepresentative in Mexico of the United Nations High Commissioner for Human Rights to intervene. 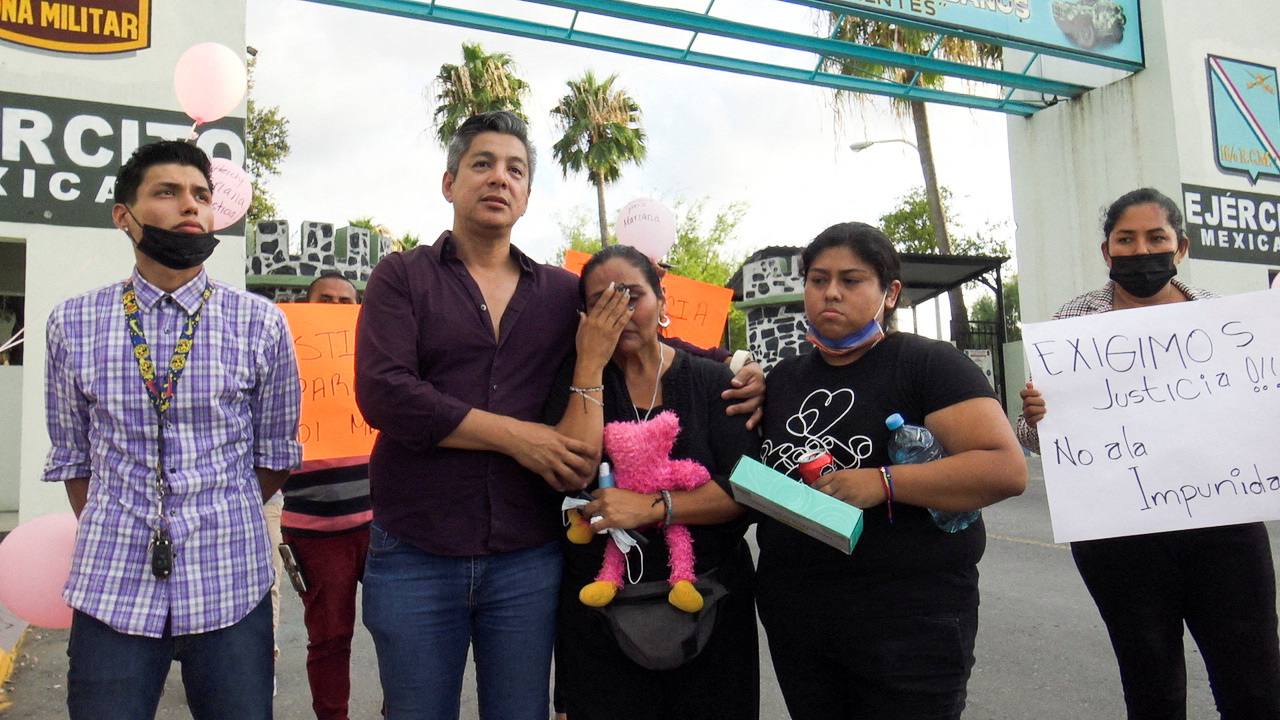 Considering these events, Ramos also asked the president not to exonerate the military ahead of time in their “mornings” because the investigations they have done show that they were at the scene of the events.

Also Santiago Aguirre Espinosa The director of the Prod Center expressed concern that Sedena is investigating the events as AMLO announced in one of his morning conferences.

Well, it was the same September 2 when the President assured that the head of Sedena, Luis Cresencio Sandovalimmediately ordered the investigation.

“Nothing else that has already been decided today for the shooter’s responsibilityof the groups, if it is from the army, because it even contributes to the investigation”, assured the president on this occasion.

And this September 5th, he claims he has confrontation between elements of the army with a “gang of criminals” and that those involved will be punished, but by the Department of Defense.

Espinosa therefore called attention to the fact and requested that this not be done, as the FGR had to do the investigation so that it would not be changed.

“The Army should not investigate these facts, the Attorney General’s Office should conduct an independent and thorough investigation, and that is why the family, the Rights Center accompanying them and their lawyer are clarifying this request,” he told the conference.