Judge Ulisa Jajoska Tapia Silva, who has been the executioner of several political prisoners, decided to acquit charges of killing girls and ordered his release in November 2021, 100% Noticias confirmed in the online court file of the courts

Alfredo Antonio Lara Ortiz, the alleged killer of the little sisters who live in Bethlehem City District, In July 2021, he was charged with the crime of robbery with violence against a woman and months later was acquitted by the sanctioned Judge Ulisa Jahoska Tapia Silvawho ordered his release.

This is what 100% NEWS also learned Alfredo Antonio Lara Ortiz, 20 years oldon the night of July 28 last year, he attacked his victim, who was sitting and manipulating her cell phone, valued at $180, on the sidewalk in front of her home located in g. Concepcion de Maria neighborhoodnear El Mayoreo market.

The Judge Ulisa Jahoska Tapia Silva, who was the executioner of several political prisonersdecided to acquit the accused and ordered his release, 100% Noticias found in the suspect’s online court file.

The attorney Yonarky Martinez they asked Power of attorney, apply the laws properly to avoid this type of crime, he said in reference to the “acquittal” of Alfredo Lara Ortiz for the crime of “aggravated robbery” in the “robbery with violence” modality, according to the file filed in Managua courts.

Read: Filtered photos of suspects in the murder of little sisters in Ciudad Belen

“We are looking at abnormal decisions like acquittals for serious crimes like aggravated robbery, this is a clear step in the administration of justice, which is so corrupt, in this case I mean the person who was investigated and who was acquitted by the judiciary,” scolded Martinez.

Ionarqui Martinez regrets the crime of the two girls and expresses that “it is the consequence of a judge who made a mistake if the law was applied correctly.”

Murillo breaks the law on children

This lunch the sanctioned, Rosario Murillo Zambrana who usurped the vice-presidency of Nicaragua, violated Code of Children and Adolescents of Nicaragua by revealing the identities of the minors killed in Ciudad Belen.

although Article 71 of the Children and Adolescent Code of Nicaragua establishes that “it is prohibited to distribute in any way names, photographs or identification marks that correspond to children and adolescents who have been active or passive subjects of a crime”, Rosario Murillo revealed the identities of the girls and their parents.

Before the violation of Code of Children and Adolescents of Nicaragua by the designated vice president, defenders of Human rights They claim that Murillo does not respect the identity of minors.

“The fact that Rosario Murillo published the names of the two girls is an abuse of childhood and adolescence. This is an attack on the families of the victims and it is also an attack on the penal system,” he explained. Carlos Guadamus up to 100% NEW.

“It is not up to Rosario Murillo in her current state to rule on investigations that are her responsibility and that are only the responsibility of the judicial operators, in this case the Ministry of Public Rights,” the human rights activist added.

Guadamusemember of Nicaraguan Human Rights Collective Nicaragua Never Againalso accused Murillo Zambrana of his “interference” in judicial matters and accused her of campaigning for the pain of others.

“This is an arbitrary intervention, it is an intervention in the Nicaraguan justice system and it predisposes this crime to the propaganda interests that Rosario Murillo represents,” the lawyer emphasized.

“This crime once again shows that the Nicaraguan state does not use the nation’s assets and resources to promote the security of citizens and the security of women who come to prevent these crimes,” Arce continued.

Guadamus named Rosario Murillo Zambrana to preserve the confidentiality of crimes committed against the best age.

In turn, attorney Yonarky Martinez He also accused Rosario Murillo of revealing the identity of the minor victims of the brutal murder, pointing out that the vice president also failed to comply with Act 779, the Comprehensive Law Against Violence Against Women.

“This is a clear sign of disrespect for the law which tells us that the identity of children and young people who have been victims of crime must be protected. Let’s remember that Law 779 indicates to the media and all entities that they must respect and avoid publishing names, avoid photos or names and photos of relatives, “Martinez explained.

For the lawyer, Murillo’s statements “are another proof that the Nicaraguan government is participating in a media show and it is a pity that such a painful event is used as advertising material, because we are facing a serious crime against a minor,” emphasized the human rights defender.

Yonarky Martinez He also explained that Nicaraguan children were victims of a state that left minors defenseless.

“In recent years, children have been victims of the state” due to the “repression” of 2018, in which several children were killed in various circumstances, at the hands of police and paramilitaries.

“Government institutions have the duty to protect, protect and implement policies regarding the protection of children,” recalled Martinez.

the defender of Human rights He also calls for the closure of feminist organizations that work on violence prevention issues.

“The closed organizations that served in various departments of the country, including children. How missing is the information and the work of organizations that at that time contributed a lot to society and that were closed by the Nicaraguan government,” he complained.

the police are silent

On Monday afternoon, neighbors of the girls complained about the silence of the police for not reporting the progress of the investigation.

“On (Monday) afternoon, the police detained two more people in addition to the three already detained. This crime could have been avoided if the police had responded to the repeated calls when there was loud music late at night at the arrested couple’s house and constant fights when they were drinking alcohol. The policemen came and didn’t say anything, but rather started laughing with them (the catchers),” one of the neighbors explained to journalists. 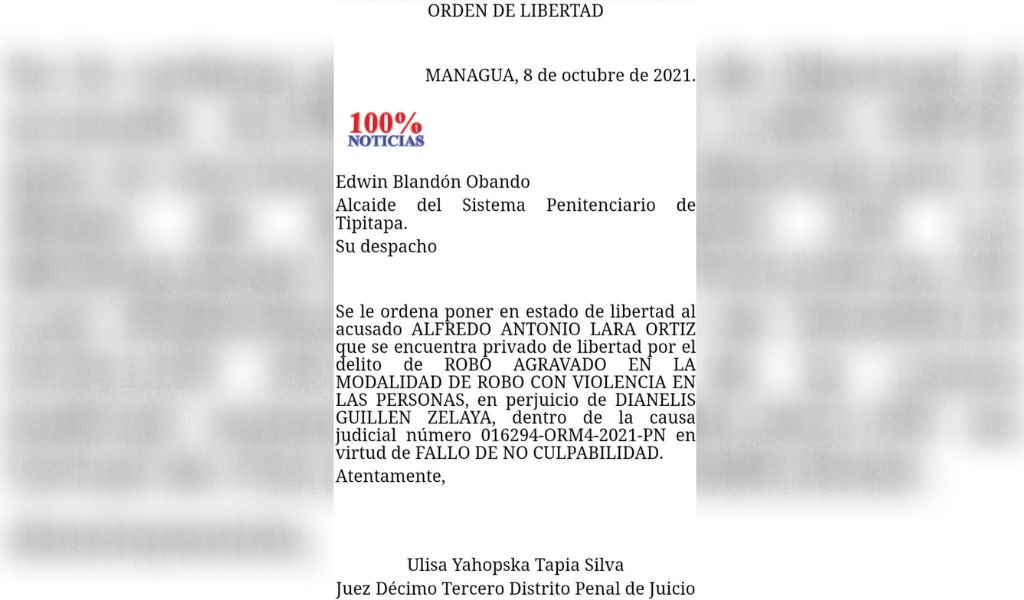 After the crime, workers from h Mayor of Managua They arrived at the property to clear the bushes and avoid another tragedy, a situation that was also questioned by residents.

“It’s no use cleaning the mountain if it grows back in a few months and they don’t show up to clean it anymore,” said another resident.