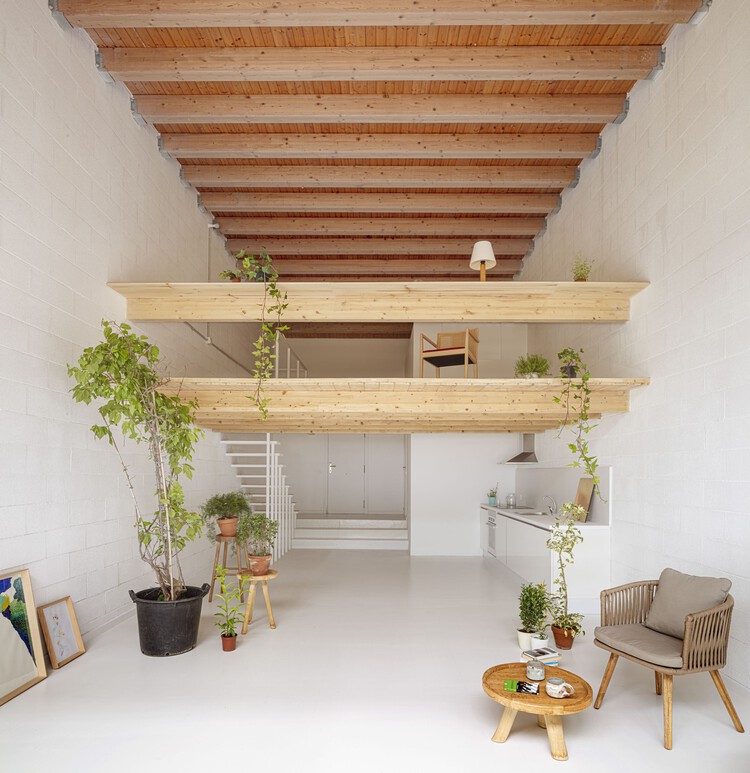 Description submitted by the project team. The project consists of the conversion of an old office 60m2 into a house for a couple. The space enjoys impressive views of the Gavá Mar beach, a constantly changing picture composed of pine trees that allow the sea to be seen between their tree trunks. The main concept of the project is to create a natural interior landscape that is in harmony with the external environment. The horizon line delineates the shifting duality between sky and sea so sensitively reflected in Hiroshi Sugimoto’s Seascapes. The design emphasizes this horizontality through a set of levels at different heights, resulting in a series of horizons inside the house.

Levels: The program is solved through an open space that improves the penetration of natural light throughout the space. The aim is to ensure the feeling of contemplating the landscape from all rooms, except the only one that is closed, the bathroom. The design perceives changes in levels and heights as invisible boundaries that unite and separate different rooms from each other. The flexibility of its use, given its non-restrictive nature, gives rise to a design that allows it to adapt to the changing needs of the occupants. At the same time, a greater perception of spatial amplitude is achieved, emphasizing the height of almost 5 meters. From the entrance there is a deep view of the whole house towards the sea.

A sculptural staircase gives access to the new mezzanine on two different levels, a study and a bedroom. The third horizontal plane, also suspended between the two partition walls, leads to a long table that prevents it from falling to the floor below. After going down a few steps from the entrance, the kitchen-dining room compresses the space vertically to expand later in the place closest to the sea. The living room is conceived as a double-height interior garden, expanding the small balcony into an environment full of light and nature.

Materiality: The design offers two constructive solutions that meet the intention of creating a simple and unified language, giving a new identity to the space. The first provides maximum light to the home; the pavement and the partition walls formed of concrete blocks are painted white. The second emphasizes the horizontal planes; the wood of the laminated fir beams, along with the tongue and groove boards, contrasts with the new abstract setting created. The choice of materials meets both an aesthetic demand and a sustainable intervention. Nature: The presence of an indoor garden aims to extend the beach vegetation into a new interior natural atmosphere. In this way, the project is an opportunity for man to get closer to his original state of connection with nature.

The vertical movement of the creepers draws a path of green leaves in the empty space. It’s about the inherent beauty of the imperfect and impermanent over time. The duality between living and dead matter; the irregular shapes of the pine trunks as opposed to the beams that once formed the trunks of the firs. A landscape between the organic and the abstract that blurs the lines between interior and exterior.