The Nicaraguan government unleashed authentic religious persecution against Catholics over the summer. Laity, religious, priests and even bishops have been harassed by the regime of President Daniel Ortega.

During these months, the presidential couple ordered the closure of various Church-related media outlets, recorded and analyzed sermons, ordered the expulsion of religious orders from the country, and imprisoned laymen and priests alike. In this modern Way of the Cross, there are two proper names: Rolando Alvarez, Bishop of Matagalpa and Apostolic Administrator of the Diocese of Esteli, and the Missionaries of Mercy.

The bishop, like other Catholic leaders, was for a long time monitored by the police because of his critical stance on what was happening in the country. Rolando Alvarez didn’t care that agents followed him everywhere, as his friend and Vicar General of the Archdiocese of Managua, Carlos Aviles, explained to this weekly, but he stood up when the persecution hit his blood family and began in May. strike.

The next episode occurred on August 4, when State Security forces imprisoned the hierarch and ten of his associates—including lay people, seminarians, and priests—in the episcopal palace of Matagalpa. A blockade that ended on August 19 when police stormed the palace, jailed the priests and kidnapped the bishop, who is currently under house arrest.

expelled from the country

In the case of the Missionaries of Charity, one of the most beloved organizations in this deeply Catholic country
— Mother Teresa herself visited him in the 1980s and even met Ortega — the persecution is even more evident. The nuns never raised their voice against the dictatorial regime. That’s not your role. “We have dedicated ourselves to caring for the poorest of the poor. We had a home for old people who didn’t have a pension and a crèche to look after the children of the ladies who had to go sell fruit or clothes on the street. We also had a canteen for 133 people and gave food to needy families. And in Granada, a home for girls who have been abused,” he explains to Alpha and Omega Sister Paola, who had been in the country for just over seven years.

Despite this charitable work, the nuns were first abolished and then expelled from the country. “They had passed a law that said 75% of the sisters had to be from Nicaragua. We did not fulfill this quota, we asked them for help and on June 13 we were called to the Ministry of the Interior. Instead of helping the nuns, “they started making a series of accusations that I prefer not to comment on because they were very unfair and they fired us in a very bad way,” says Paola. From there, “they stopped our work, they checked all the documents that we had in order and shortly after that they kicked us out”. On Tuesday, July 6, 18 nuns from three different communities had to leave.

In the footsteps of Mother Teresa 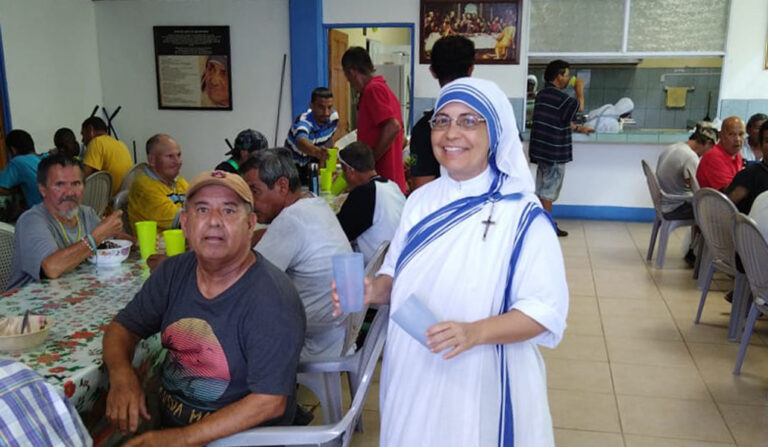 Paola from Talavera de la Reina (Spain) decided to become a Missionary of Charity when Mother Teresa died – just last Monday, September 5, the 25th anniversary of her death – “after seeing her funeral on television”, admit. “I became interested in the order and they gave me a book that told how the sisters lived.” “They live by faith. I want this’, I thought then’. Thus, Paola went to Madrid to do a 15-day test. There he had a powerful experience with the poor. “I was entrusted to take care of Manuel, a homeless man with HIV,” she recalls. “He had a lot of candida in his mouth, so all the food and medicine had to be given through juices.” When Manuel fell asleep, the young woman went to the chapel. “There was Jesus on the cross next to the words ‘I thirst.’ And then my mind clicked. I realized that “Manuel and Jesus were one and the same. Jesus on the cross with the thirst for his soul, and Manuel in bed, his cross, with the thirst for juice”. What a privilege to be at the foot of the cross and quench your thirst!». In the end, Manuel dies and Paola realizes that she has found her calling.

“What happened to the people they cared for?”

— The day before the departure, a group came from Sant’Egidio and took the elders to the houses of other orders. We had to close the nursery. And the girls who were abused, all between the ages of 8 and 13, we had to hand them over to their families. Imagine what it was like for them to return home. Everyone left in tears, and so did we.

After leaving Nicaragua, the nuns arrived in Costa Rica and were already distributed in Central America. Paola and three other sisters will open a house in Cañas, Costa Rica, which is on the border with Nicaragua and is full of Nicaraguans. “The management saw that this was a good place. We will continue to serve Nicaragua from abroad.”

“Can we talk about religious persecution?”

– Totally. There is no doubt that there is clear persecution against the Church. It was agony for us. We were able to become one with Christ on the cross and with Mary at the feet of her Son.