Tito, you’ve just been crowned Spanish Superbike Champion, did you expect to be in Navarre?

In Navarra, I didn’t expect him at all because this year in the championship there was a very level, which were the first 6-7 riders and the truth is that we were lucky that it didn’t rain, he had a mechanical failure and managed to stay on the track and give gas when the time comes. Ilya failed a little at Alkaniz and also at Navarre. We didn’t expect it at all, but I will be able to go to Jerez, I’m just worried about giving it gas.

What does this title mean to you?

That gave me a break. He sleeps better at night (laughs). A lot of satisfaction, because there are many important things, but to be able to sleep satisfied is the best. At all the tracks we were faster than last year on the Superbike and for me that means seeing that I’m still improving, that I’m at 300% and having fun doing what you love is priceless.

You’ve been very consistent throughout the season, although you’ve had some very tough opponents who haven’t made it easy for you…

At the beginning of the season, Oscar started very strong, as did Max Scheib, although the latter lost his swelling. Then Ilya (Mihalczyk) showed up in Estoril and when nobody expected him, Oscar crashed and missed the Montmelo race and it was a shame because fighting him is so much fun. Borja (Gomez) also appeared, who won almost all the last races… The championship is full of young talents who come with a lot of energy and fighting them makes me a better driver. It was by no means easy to get the title and it shows in time.

As you say, you had high-level opponents like Oscar Gutierrez, Borja Gomez, Ilya Michalchik, Ivo Lopez, Roman Ramos… but who was stronger for you?

It changes. In the beginning, Max and Oscar were very strong. Then Oscar was injured and that reduced his pace, his confidence etc, but then Borja came along and he’s going very fast. Ilya was also there, but he was losing weight… in every race we had two or three tough opponents, but luckily they were the ones who had their ups and downs and we didn’t.

In general, what do you think about ESBK after participating at the highest level in the best international championships?

What did ESBK give you that the SBK World Championship didn’t?

I learned and this was told to me by Jaime (Fernandez Aviles) that sometimes it is better to be the head of a mouse than the tail of a lion, because in SBK there are many drivers, high level and there is no room for so many good people. I went to SBK with a privateer team, with a bike that was not well prepared and which is impossible to do well. This year in many races we set much faster laps than last year in the World Championship. This weekend I did half a second faster than in SBK. The bike for the Spanish championship is worse than the world bike, but it is tuned. Sometimes it’s better to take one step back than two steps forward in bad conditions. I am very grateful to have been at ESBK.

“The climate, the media, the culture we have in Spain is what makes us referential worldwide” 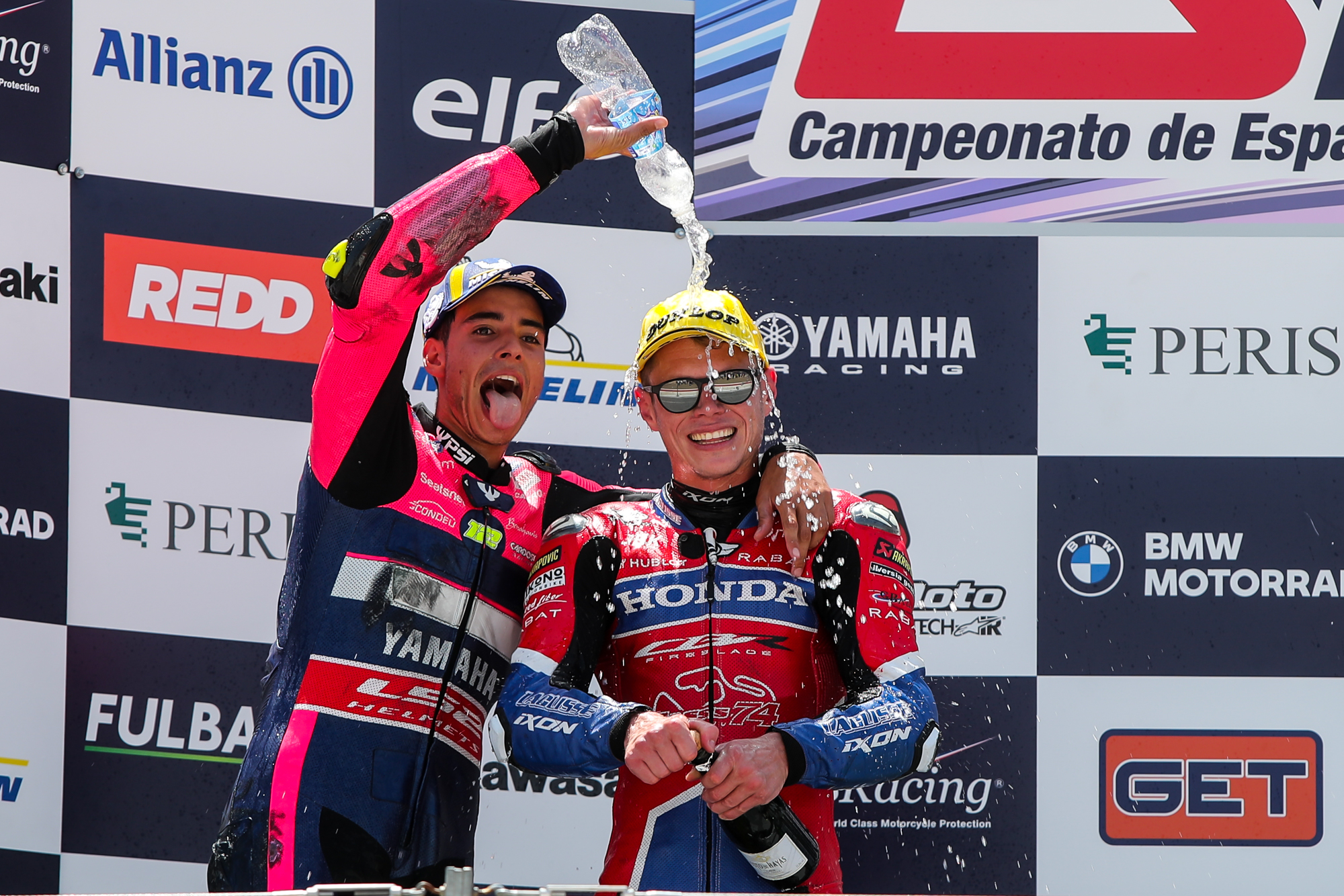 As you have been able to verify, in the Spanish Superbike Championship you have very experienced riders like you and the new generations that are starting to pick up the pace on the big tracks thanks to the Moto4 and PreMoto3 categories. do you think about this mix in the competition??

Well, that seems very good to me because the little pilots see the veterans like me and they don’t see their goal that far. When I raced in the Spanish Championship and saw those in the MotoGP World Championship, I thought they were gods. But here it is seen that we too are of flesh and blood. It’s important for the pilot to believe in himself, the pressure is high, they’re young kids and at 20 years old they’re still… it’s important to believe in you. There are many people who say things without knowing and they are children and it can help them to see an experienced driver doing what they are doing.

Do you think that the high level of Spanish sprinters is due to this? That young people have the opportunity to compete in world circuits?

I think that helps, but not only that they are racing on the World Championship tracks, because with these bikes and on such big tracks there is a lot of time, a lot of space on the straights for example. But in Spain we’ve always been good at motorcycles, we have good weather, good tracks… I think it’s more the culture we have, how we live here, the resources we have (including the tracks). Everything is small.

Going back to your ESBK debut, was it difficult for you to adapt to the new bike?

Well, I came from racing with Pirelli, in a different SBK to ride and we almost didn’t make the pre-season. The bikes run differently, the Honda runs on Dunlop tires which I haven’t raced for a long time… and to push yourself to the limit on a bike you’ve ridden for two days because it was so good, I had to woke up… (laughs).

How did you get the opportunity to be part of Team Laglisse with Jaime Fernandez Aviles?

I ran to Mandalica and Emilio from Dunlop tried to set me up. We are very good friends and in the end I realized that continuing the way I was wasn’t worth it, I couldn’t get the most out of myself, so I had to make an effort, turn the page and I thought my passion was so and so, even though I wasn’t going to the World Championships, I was going to keep doing what I wanted, they were going to give me a bike to win with… as soon as I got on it, all the nonsense went away and I started to I’m enjoying myself like I haven’t in a long time.

“The championship must have at least 14 races” 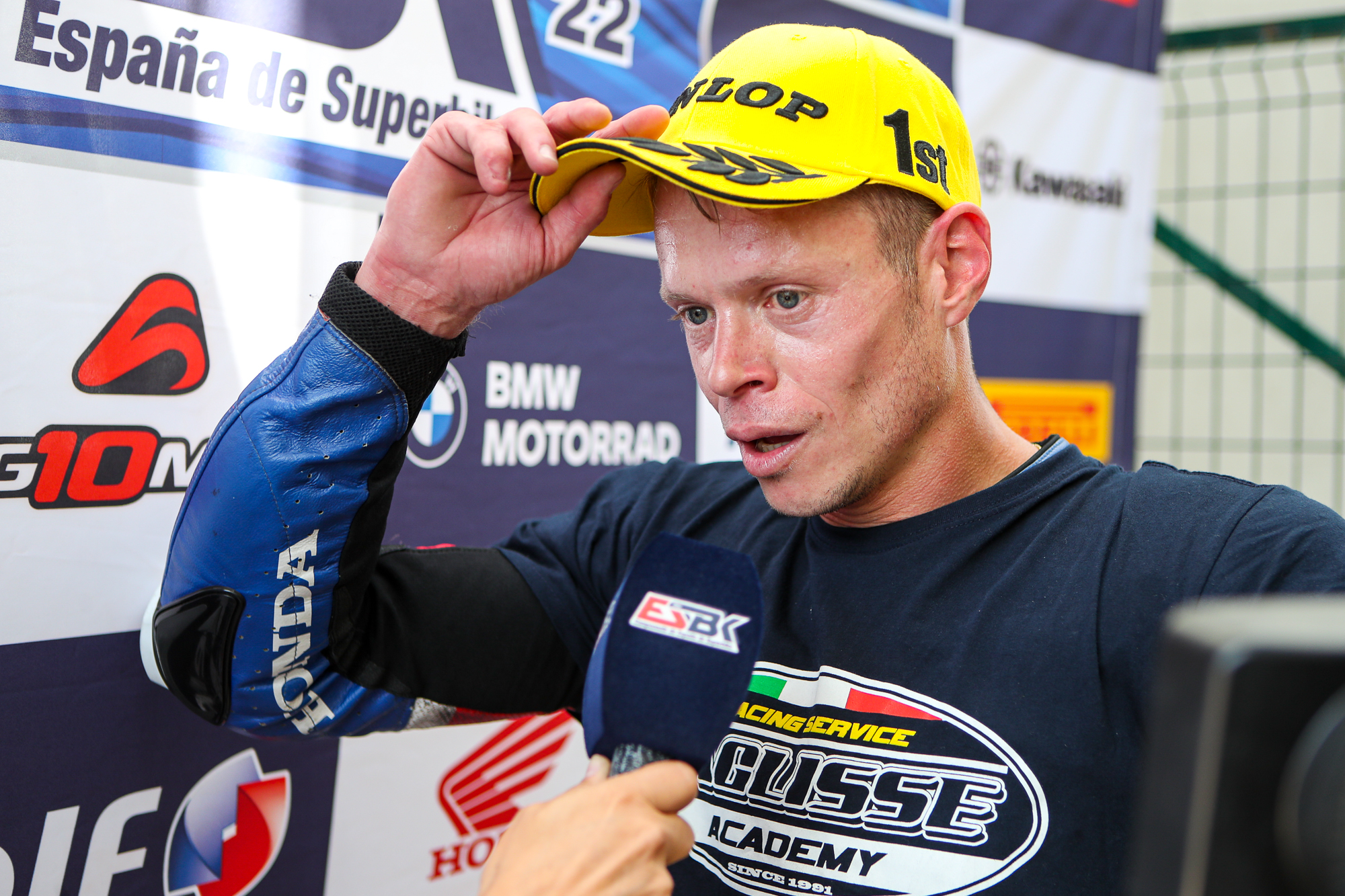 Will we see you defending the title next year?

You know that Sunday’s races are broadcast live on RFME’s Youtube channel, how do you think the federation has chosen to give more visibility to the championship?

It seems fine to me. More specifically in the SBK category, with Miguel Ángel the narrator and with Javi del Amor they are doing very well and I think it is very important for the championship.

Is there any aspect of ESBK that you would improve?

Yes, there is one aspect that could be improved. I find it exciting that there is a tire war, a brand war, that drivers are coming from abroad, that it is being broadcast more and more, but what will improve is that there are only 7 races. It should be at least 14 and I’m already satisfied.

Thank you very much Tito and congratulations

Copyright RFME. Images of free reproduction in the print press and the web. For any other use, contact the owner.