In 1954, Monaco welcomed an incredibly beautiful young actress: Grace Kelly, who arrived in the Principality to marry Rainier of Monaco. The couple created a family in which love, tragedy, luxury and even curse were not lacking. Their children have nothing in common with their parents, who instilled in them an education distinguished by discretion and elegance. The new royal generation grew strong and continued Grace’s legacy.

The Grimaldi became a legend. Upon arriving in the Principality, princess grace kellyone of Hollywood’s most acclaimed actresses, turned Monaco into an epicenter of glamor and luxury. In fact, she is the creator of one of the most current events of Monegasque high society: the dance of the roses. Today it is one of the big events attended by the entire royal family of Monaco.

The ruling house in the Principality belongs to the Italian Grimaldi dynasty, which settled on these lands in 1297. With an area of ​​just two square kilometers, the Principality is the smallest nation in the world and has a constitutional monarchy established by 1911 with a ruling head of state and surrounded by a cabinet consisting of 6 members.

More than a monarchy, the Grimaldi family is considered a saga that has not been lacking love, contradictions, luxury, tragedies and even a certain curse. The history of the dynasty is marked by a series of tragedies that began with an event between Rainero I and a gypsy woman which gave him the evil eye. And although it is considered a legend, there are those who believe that this family’s misfortunes began with this event.

Monaco was impatient. One of the most famous actresses on the American film scene has landed in the Principality to become the wife of the reigning prince. Besides success, Grace Kelly She was one of the most attractive women in cinema. The two met at a party organized in The Grimaldi Palace.

Grace Kelly in one of her movies.

The actress, in addition to being greeted by the applause of the Monegasques, had to undergo gynecological examination on Rainero’s order to check his fertility. On April 18, 1956 civil relationship between the sovereign prince and the actress. A day later, a wedding in Monaco Cathedral, a televised film and a massive character. The bride wore a Helen Rose gown embroidered by 36 seamstresses. That day, Monaco stood at the feet of Hollywood. 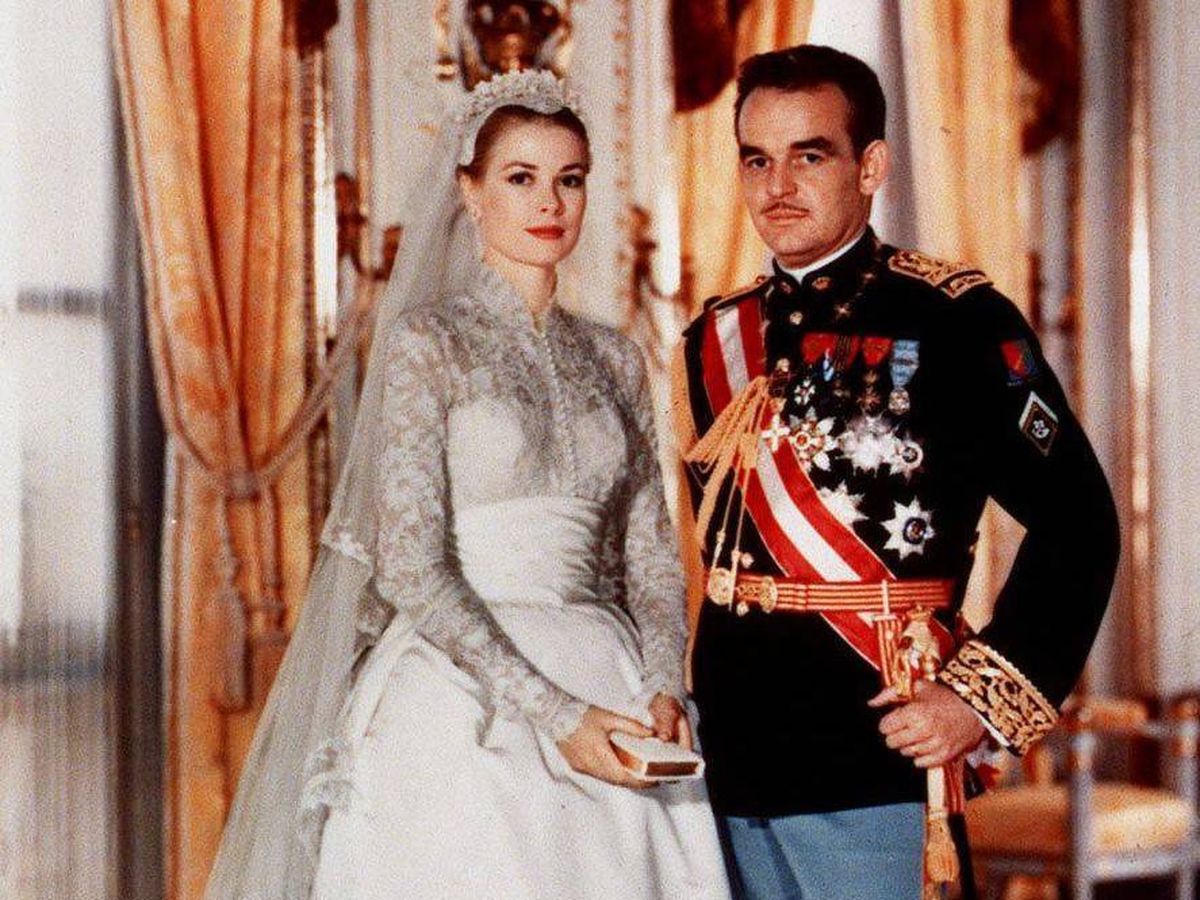 Wedding between Grace Kelly and Rainier of Monaco.

The couple chose Fr Mallorca as a destination for your honeymoon. During the trip, they enjoyed Spanish gastronomy, bullfights and museums.

Both seemed to make up one of the most consolidated marriages on the European royal scene, although not everything was rosy. Despite the fact that the princess fulfilled her duties as a wife, she was not able to eliminate the cinema from her life. Also, the director Hitchcock offered him to return to the set, a fact that cost him clashes with Rainier of Monaco. The monotonous life in the palace took its toll on him. 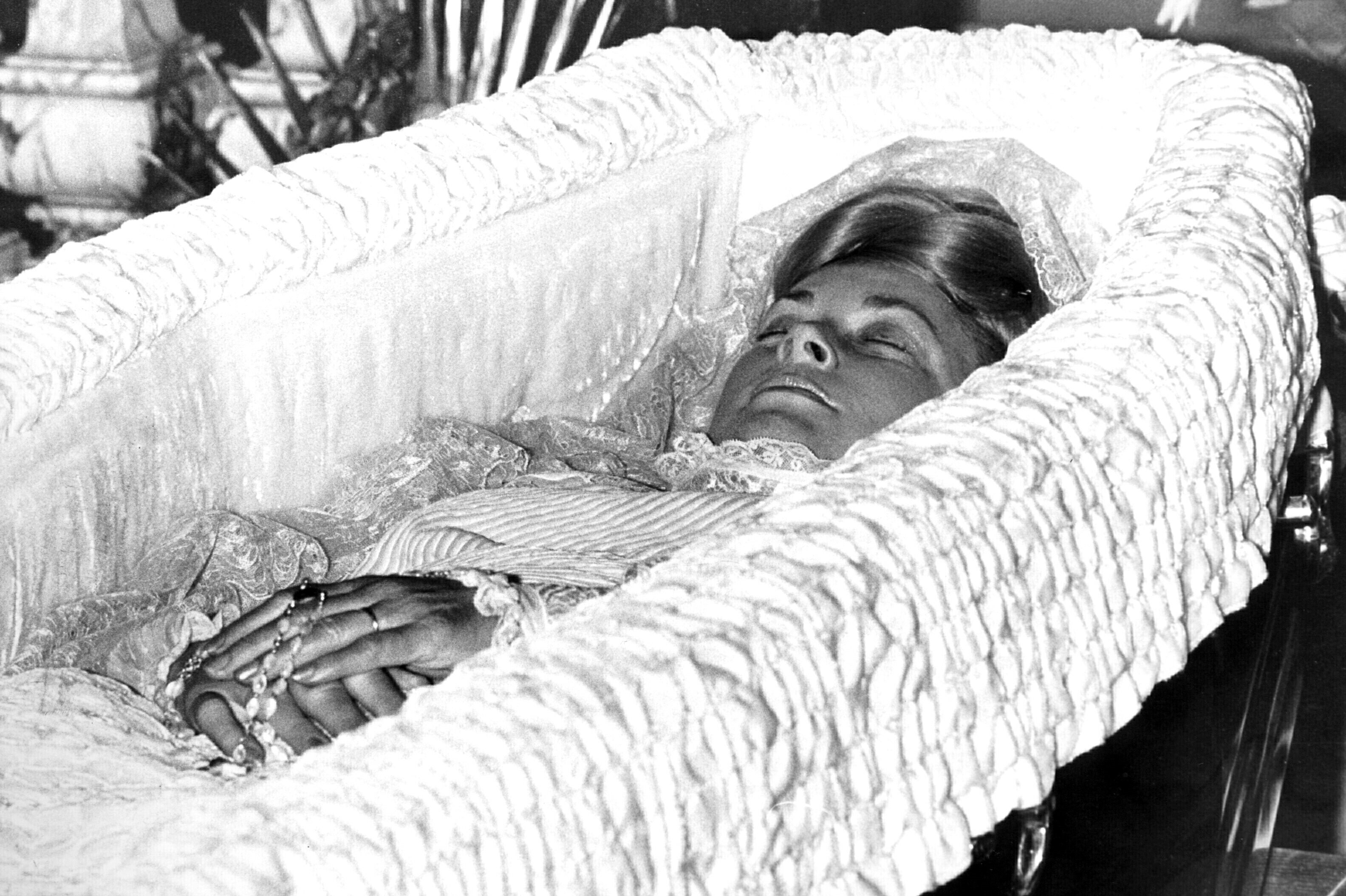 Casket of Grace of Monaco.

A marriage broken up by tragedy. In 1982, the princess Grace Kelly died of a car accident in Cap-d’Ail and which is still being speculated upon. The Sovereign Prince was left without his partner and sank into great sadness until his death on April 6, 2005.

Caroline of Monaco: The Bride of Europe

The birth of Princess Caroline was a great joy for her parents. Princess Grace Kelly was already pregnant during her honeymoon and Caroline was born on January 23, 1957. She is the eldest of three brothers and with her brother Alberto maintains a great partnership.

As Grace Kelly’s eldest daughter grew up, she became an attractive and elegant princess, earning her the nickname of “The Bride of Europe”. 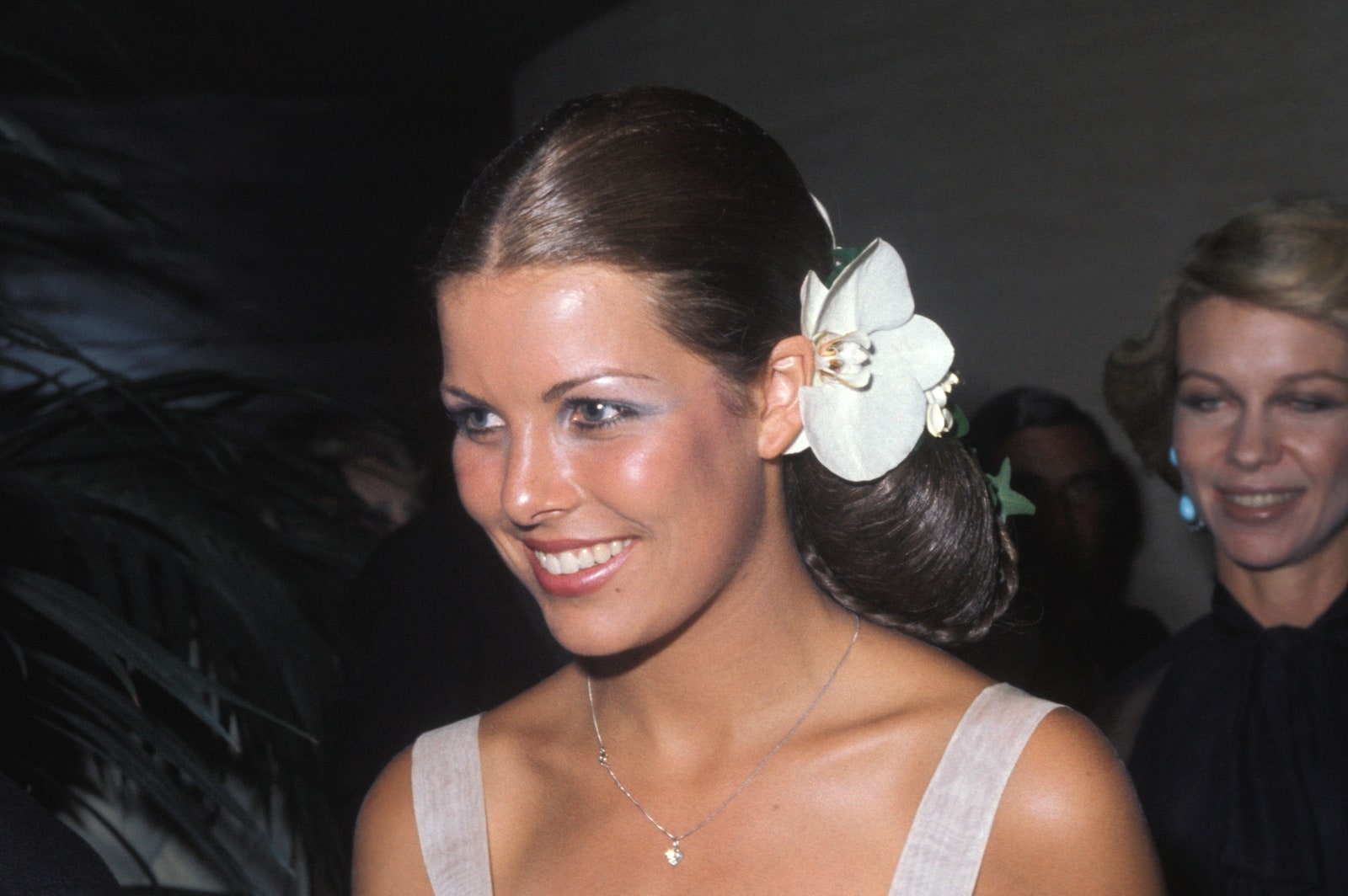 In Paris, he will study in a boarding school and will begin to be photographed on the covers of gossip magazines because of his first loves. There she fell in love with her first husband: Philippe Juneau. A playboy, older than her and very experienced, whom the sovereign princes reluctantly accepted. The wedding took place in 1978. The divorce came in 1980. 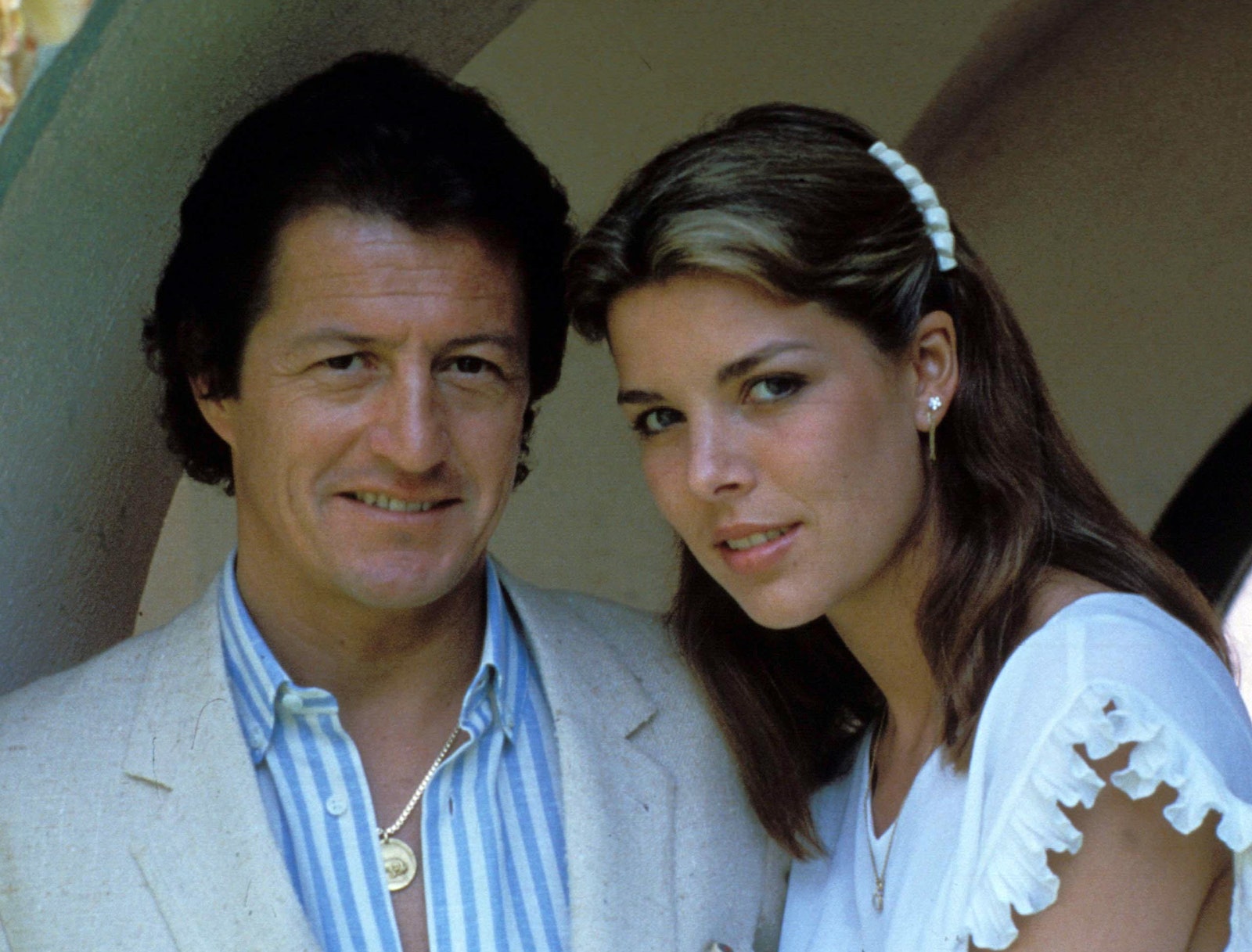 Caroline of Monaco and Philippe Juneau.

Theirs second husband, who he meets in the summer of 1983, will become the love of his life. Together with the athlete Stefano Casiraghi they formed a rich, famous and attractive couple. The couple welcomed their children Andrea, Pierre Y Charlotte. The fateful accident of the businessman on October 3, 1990 during a competition abroad sank the “Princess” and as a result of the stress she suffered from alopecia. 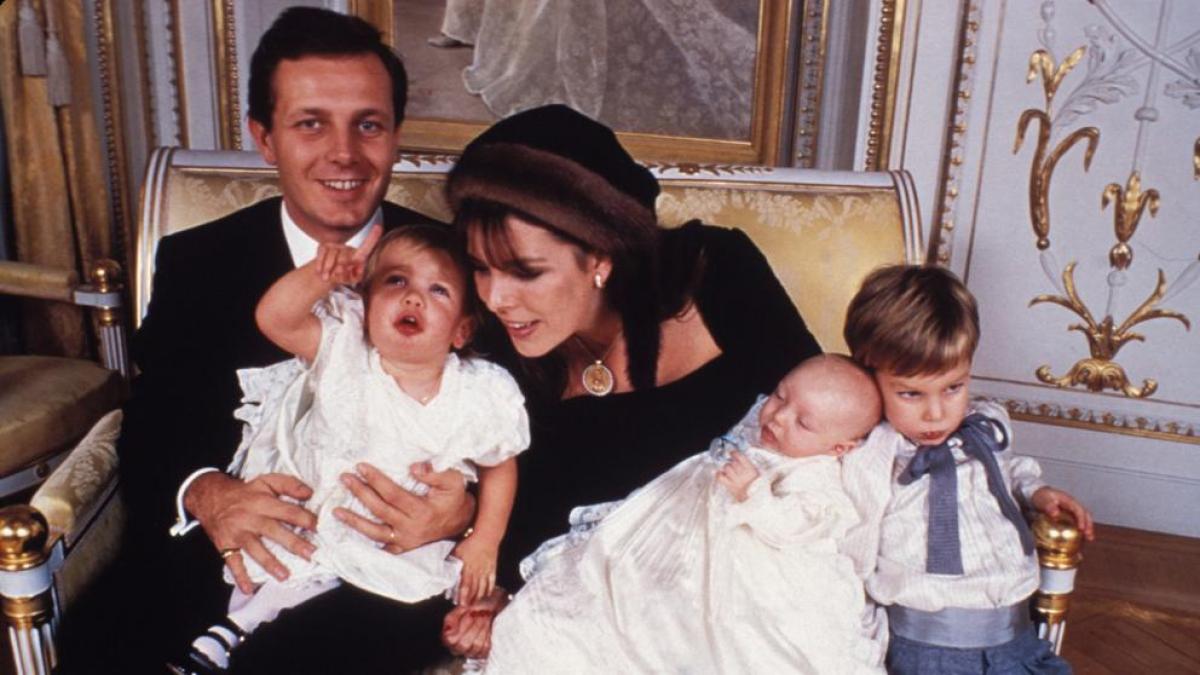 Caroline of Monaco, Stefano Casiraghi and their children

Theirs last marriage it was not without controversy. Ernest of Hanover he was not the most discreet member of the House of Grimaldi. His constant arguments and nightly revelries they made the princess full. Caroline of Monaco and Ernest of Hanover.

No one can forget the princess walking alone at the wedding of the King and Queen of Spain due to the absence of Ernesto de Hanover due to a “complicated” night at the Gabana nightclub. The marriage broke up in 2008 and they had a daughter, Alexandra of Hanover in 1999

Albert of Monaco, sovereign prince and acclaimed among women

The long-awaited male heir appeared in the world in 1958 and soon became “child from his mother’s eyes”. For many years the sovereign prince was in the background, although after the death of his father he had to take over the management of the Principality. 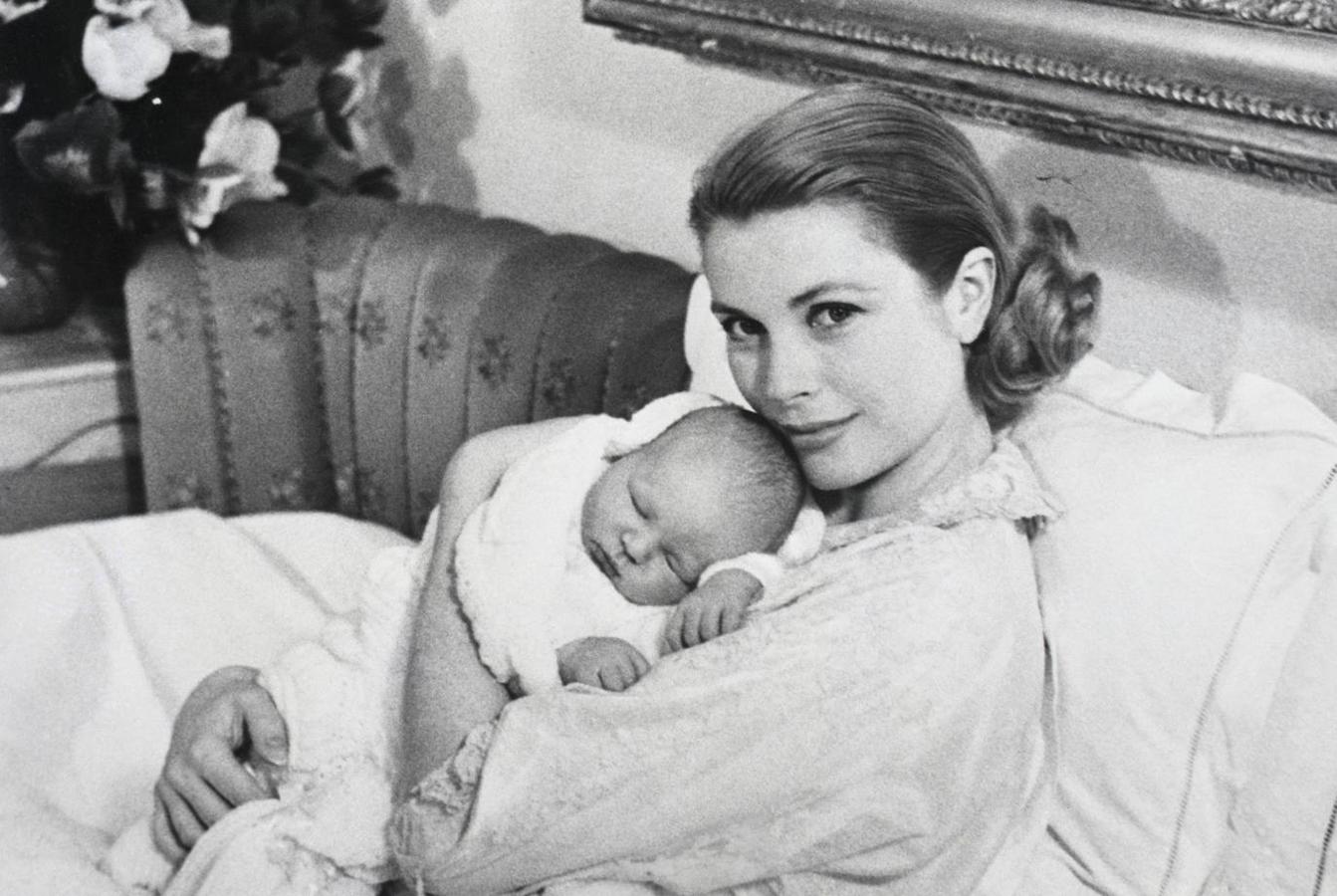 Birth of Albert II of Monaco.

A great fan of sports and learning, his childhood was marked by an education focused on his future tenure. Although he is in the shadow of his sisters, he begins to stand out with his ongoing novels. He has been linked to actresses like Brooke Shields or models like Claudia Schifferand was even associated with Baby Christina and the actress Ana Obregon. Moreover, he has fathered two illegitimate children as a result of the relationship he had with a flight attendant named price per nicol.

The long-awaited wife of the princess appeared at a swimming championship, which was held in Monaco. A young South African swimmer of great beauty captivated the sovereign, who had difficulty gaining the approval of Charlie Wittstock. After several years of comings and goings, Alberto de Monaco achieved his goal: he will marry the swimmer.

The wedding of Albert of Monaco and Charlene Wittstock.

The wedding took place between July 1 and 2, 2011. The bride, who wore a signature Giorgio Armani gown, she did not stop crying during the entire ceremony. The offspring of the marriage did not take long to arrive, three years later they welcomed their children, the twins Jacques Y Gabriel.

The sovereign princes with their children.

For years, the sovereign prince had to attend official events alone due to the continuous and severe health problems that Princess Charlene is suffering and this is attributed by many to the social pressures she is under.

Estefania de Monaco, the black sheep of the family

The fateful accident in which her mother died in 1982 will always be a martyr to the youngest princess Grace Kelly, StephanieWell, he was in the car with her. In addition to the shock of witnessing it all and suffering it herself, she had to face testimonies that claimed it was her who was driving the car.

Estefania de Monaco with her parents.

Little Stephanie appeared in the world in 1965 much to the delight of his parents. After the death of her mother, Princess Stephanie was showing his most rebellious side. It was difficult for him to accept the protocol.

They beat her up capricious and unruly and was even talked about bad relationship with his sister Carolina, who tried to play the role of a mother. She was moving in an environment that was not advisable for a princess, tries his luck as a singer And soon I would wake up to love. 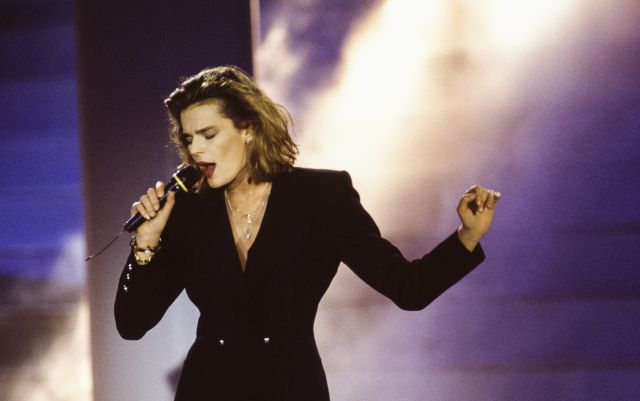 In 1995, she married her bodyguard, Daniel Ducretwith whom she had her children louis Y Pauline. The couple divorced after the publication of several photos in which the bodyguard appeared to have sexual relations with a woman.

Estefania de Monaco with her children, daughter-in-law and son-in-law.

Daniel Ducré was not the only escort with whom the princess had a relationship, because with Jean Raymond Gottlieb had his daughter Camille. Later relationships with men associated with the circus world are known, Adams Lopez Perez Y Frank Knee. Currently the little girl of Grace Kelly and Rainier of Monaco lives away from the media spotlight.