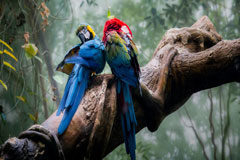 About a million species, including some we thought were common, face extinction. (Unsplash Photo/Alan Godfrey)

Various human activities, such as excessive logging and deforestation, as well as various behaviors of industries, such as fossil fuels, agriculture, and fishing, are destroying hundreds of species and ecosystems. The UN Conference on Biodiversity proposes measures to ensure a sustainable relationship between nature and people.

About one million species, including some we thought were common, face extinction, according to a report by the Intergovernmental Science-Policy Platform on Biodiversity and Ecosystem Services (IPBES), an intergovernmental, independent scientific and policy organization supported by the United Nations.

Reading this document, we are surprised to learn that giraffes, parrots and even oaks are included in the list of endangered species, as well as cacti and algae.

Seaweed, for example, is one of the largest survivors on the planet. Relatives of some of its modern varieties date back about 1.6 billion years. This marine vegetation plays a vital role in aquatic ecosystems, providing habitats and food for various life forms in the seas and oceans. Large species of seaweed also act as nurseries for many fish.

Algae can be used as animal feed and can help reduce greenhouse gas emissions.

However, mechanical dredging (removal of rocks and sediments), rising sea temperatures and the construction of coastal infrastructure are contributing to the species’ decline.

Rising from the waters, onto the land, trees around the world are threatened by a variety of economic and social practices, including logging and deforestation for industry, agriculture, and wood for heating and cooking. Forests are also threatened by weather such as forest fires.

According to the International Union for Conservation of Nature (IUCN) Red List of Threatened Species, it is estimated that 31% of the world’s 430 oak species are threatened with extinction, and up to 41% are the cause of extinction. , mainly due to deforestation for agriculture and the need for cooking fuel.

Giraffes, on the other hand, are attacked for their meat and suffer from habitat degradation. There are only about 600 West African giraffes left in the wild due to unsustainable logging and increased demand for agricultural land!

According to experts, the current biodiversity crisis will escalate and lead to catastrophic results for humanity unless humans interact with nature in a more sustainable way.

“The IPBES report makes abundantly clear that wildlife is an indispensable source of food, shelter and income for hundreds of millions of people around the world,” said Susan Gardner, Director of the Ecosystems Division at the United Nations Environment Program (UNEP). ).

“Sustainable use is when it contributes to human well-being while maintaining biodiversity and ecosystem functioning. By continuing to use these resources unsustainably, we not only harm and risk losing populations of these species; we are affecting our own health and well-being as well as that of future generations,” he adds.

The report talks about the importance of ensuring that indigenous peoples can have tenure rights over their lands, as they have long understood the value of wild species and learned to use them sustainably.

Changes that are needed to reduce biodiversity loss include equitable distribution of costs and benefits, changes in social values ​​and effective management systems.

Governments around the world currently spend more than $500 billion each year supporting actions by industries such as fossil fuels, agriculture and fishing that ultimately damage biodiversity. Experts say these funds should be redirected to boosting regenerative agriculture, sustainable food systems and nature-positive innovations.

The Framework sets out an ambitious plan to implement wide-ranging actions to achieve a transformation in society’s relationship with biodiversity and ensure that by 2050 the shared vision of living in harmony with nature is met.