Skip to content
by omeuoraculo.comPosted onAugust 10, 2022
Jaime Soriano infects the little ones with his love for the mountains and nature

He was born 40 years ago in the heights, at 3775 altitude in San Antonio de los Cobres, the city of the train to the clouds. Jaime Soriano is a very inspiring mountain guide in his lands. Nearly 10 years ago, he opened a school so that boys could learn for free to live like him from tourism and become future guides and climbers. And on the 19th of this month, he will be part of an expedition that will reach the top of the Himalayas, where he will use no oxygen other than his lungs.

His love for nature was born as a child when he slept outdoors on the road that connected his town to a place where his grandparents used to stay in Janaleri, 4,500 meters above sea level. Sometimes their parents had money to rent a vehicle, but other times they didn’t, so they walked the 45 kilometers and sometimes cycled. “Many times when we returned, the night would overtake us and we would end up sleeping in the middle of nowhere. We had some blankets and blankets, we didn’t have tents and sleeping bags,” he explains. “It was a miner’s road, not much used. My parents always tell me that they started taking me when I was a baby. That’s how my love for nature began,” he adds.

During adolescence, this passion was even stronger. Jaime was out in the field all the time and he liked to “be on top”. When I studied at a technical college in tourism, they had a subject in which this was reflected. I’m doing this, he told himself. It was about alternative tourism. Many tourists came looking for information and he already knew many ways to reach the mountain. And he began to like the subject, so much so that he went deeper and became a mountain guide. To take the exam for the Argentine Association of Mountain Guides, he had to travel to Catamarca. “And we meet there. I had a lot of experience and have been able to work professionally ever since,” he says. 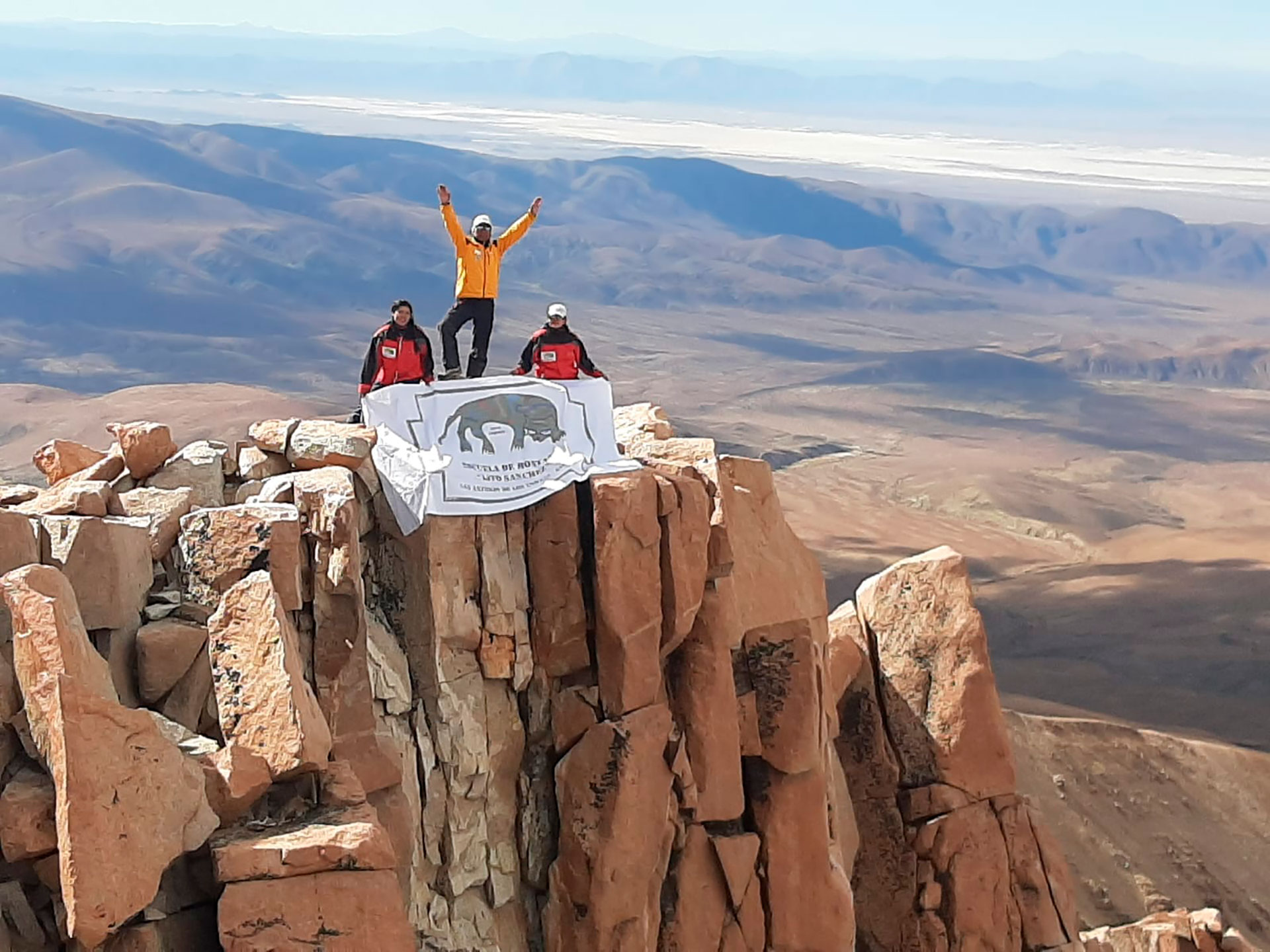 Jaime Soriano’s life takes place in the heights. The photo was taken in Nevado de Chañi, in Jujuy

Connecting with Jaime is not easy. If they call you on the phone, it is very likely that you have no signal and are “up”. His life passes through the heights and not only those of his province. He worked for five years in Aconcagua National Park, where he climbed the highest peak of the Andes (6960 meters) 18 times. His sports career currently includes climbs in the mountains of Argentina, Chile and Bolivia. “Thank God that I devote myself entirely to this activity, with mountain expeditions of all kinds and through different provinces of the country.”

The achievements of this mountain man are not always related to heights. 10 years ago, he began to fulfill one of his dreams: to create a mountain school to train boys and young men to become guides and work for tourism like him in the future. It is amazing that they had nowhere to take their first steps so close to the clouds.

“Ever since I knew they weren’t going out and committing to it, I always had this desire to want to show the kids in my town what I do and the places I know. Thus, a mountain school for children was born. is named Lito Sanchez (the first Argentine to climb the Himalayas) and is not an official institution. This is my project. On August 27, we turn 10 years old. The municipality of San Antonio de los Cobres has supported us from the beginning. He helped us with assembly and gave us a classroom in a municipal sports hall, where we assemble the palestra. 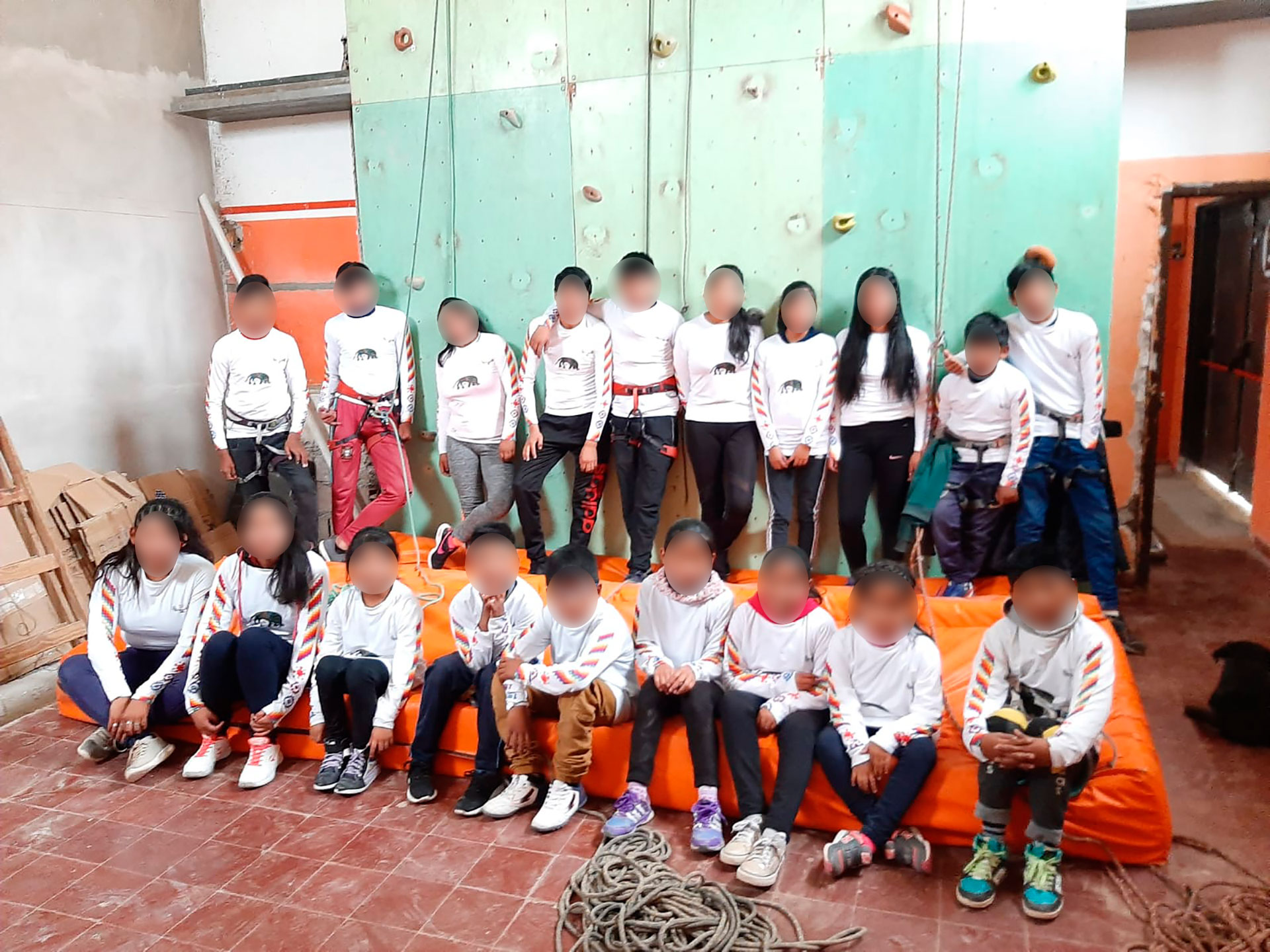 They worked for a long time in Mendoza, from there they are the godfathers of the mountain school. This is the Mendoza Mountain Rescue Patrol. They helped me with the opening, to organize the lecture that we have here, with some activity, sending things for the children. They are always present in one way or another in the institution.

The next step for Jaime would be to have his own building, because sharing the space at the sports center, he says, sometimes activities are interrupted. “We received the donated plot, but the construction requires large investments,” he says.

In these 10 years, he achieved part of his mission by being able to pass on his passion for the mountain. “Nowadays, many boys dedicate themselves to it, not permanently, but they care to become mountain guides like me, and the boys always take part in my expeditions, always go out with me, They are doing some practice.

About 40 students aged from 5 to 27 are educated in the school. They were engaged in mountain, rock climbing. One of the girls, 16 years old, named Mariana Salva, climbed the Llullaillaco volcano, the highest in the province and the second highest in the world in terms of activity, with a height of 6,739 meters. “After I got her, I kept thinking that after the Incas and their ‘girl’ who was about 15 years old, she was the girl from my school who was the same age. It was a great pleasure to take her to this place which is so sacred to us. 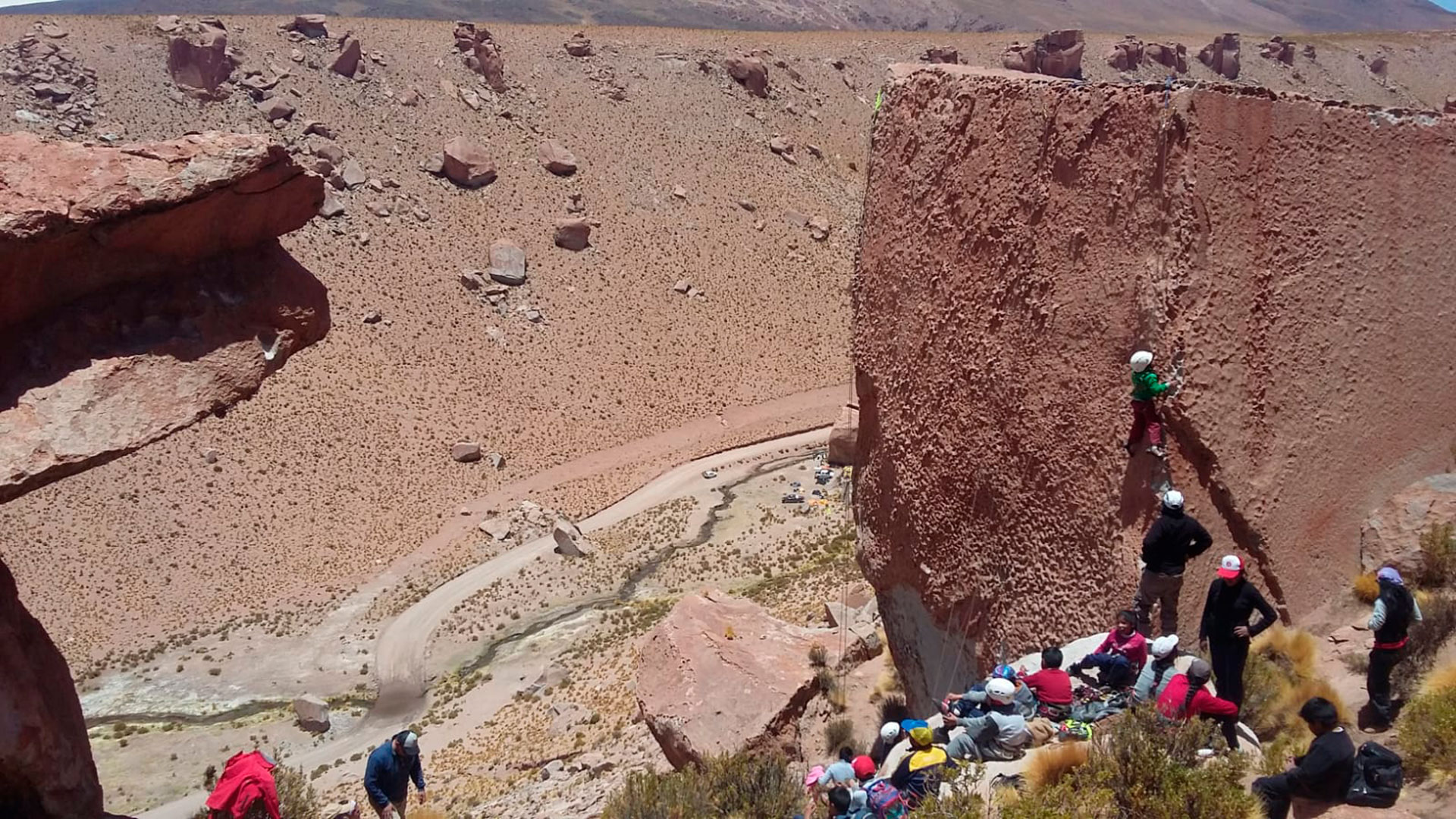 At the Lito Sánchez School, Jaime teaches children everything he knows for free so they can build a future for tourism

Jaime was talking about the girl, one of three mummies discovered in 1999 by an expedition led by Johann Reinhardt and Argentinian archaeologist Constanza Cerutti. They were three Inca children (a 15-year-old girl, a 6-year-old girl and a 7-year-old boy) who were sacrificed and mummified by freezing about 500 years ago on top of the volcano. “The tallest archaeological site in the world,” says Jaime. The mummies can be seen at the Archaeological Museum of the High Mountains in the capital Salta.

PIt was quite powerful and representative for me to take the boys, knowing the history of this sacred mountain. Especially considering we are all of Aboriginal descent.

The boys of the school, although not qualified guides, perform the function of taking and giving information. They are sufficiently trained to accompany the tourist, in the mountain, the most visited in the area. In the climbing arena, they practice the techniques. 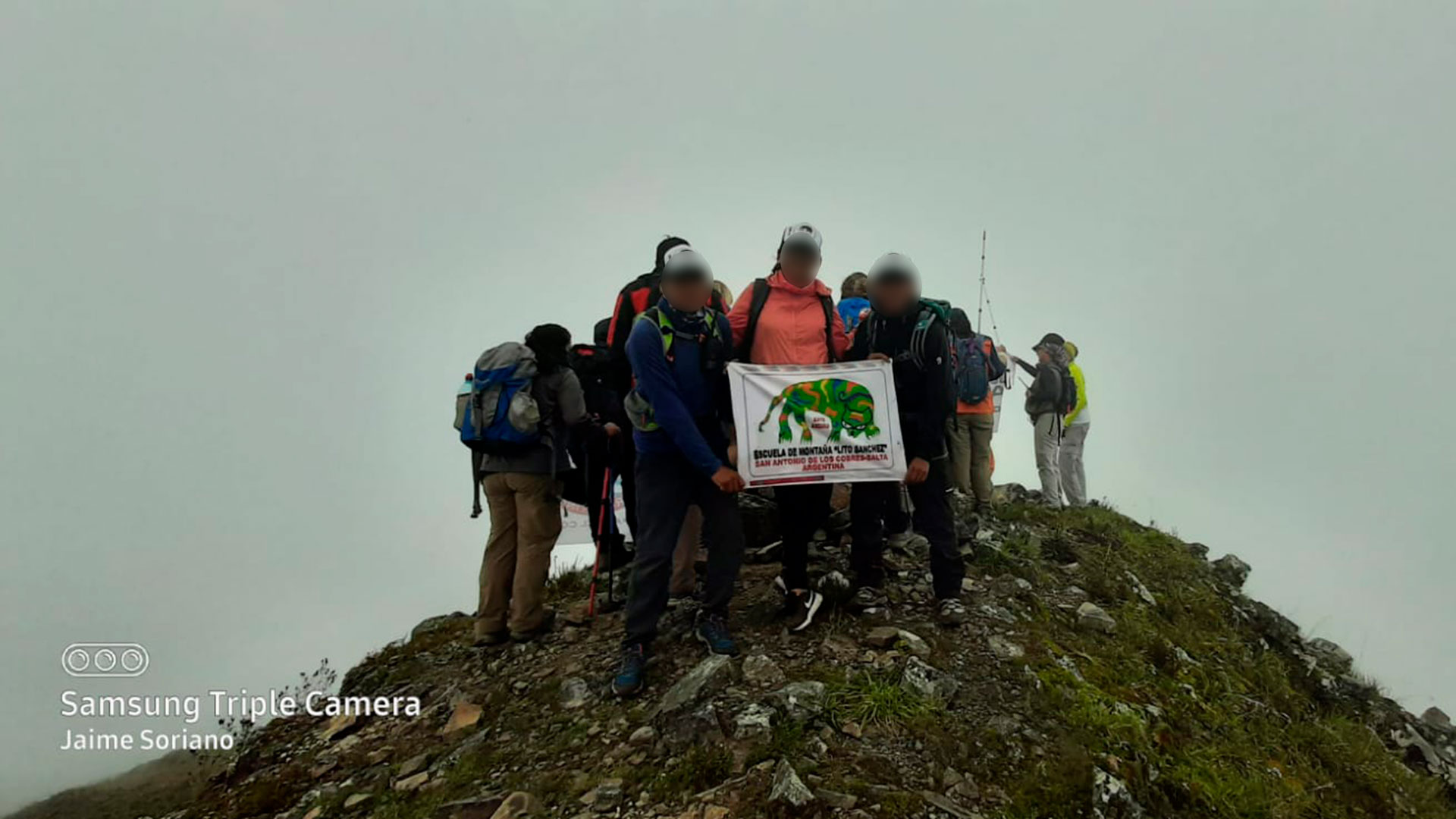 What has always prevailed in the school and tries to convey to its students is not only mountaineering or rock climbing, but a way of life. “In this way of life there is a harmony with nature that is very much lost today. They learn that in addition to mountaineering as a sport or as a job opportunity, first aid, rescue, survival, environmental care.All that kind of stuff,” he says.

“For us, the mountains are gods, living, powerful beings,” Jaime says of beliefs in the Andean world. “My grandparents used to tell me that it’s not good to fall asleep in the mountains because you’ll be like magic. I did it several times, I sat down and slept for hours,” he says.

He is also used to doing in one day what others take 10 days of expedition. “I like to climb the mountains during the day, without camping. This is a personal question that I do with advance preparation and research. I found a particular taste for it. Sometimes I go with students from my advanced schools who are strong and also alone,” he explains.

During the camps you never lose the taste of enjoying one of the greatest shows in the world: thethe skies of pune. They are so clear that they ensure that all the stars can be seen. “The vastness is incredible. You have to experience it, it cannot be expressed in words. Sunrise and sunset are also not to be missed” recommends. 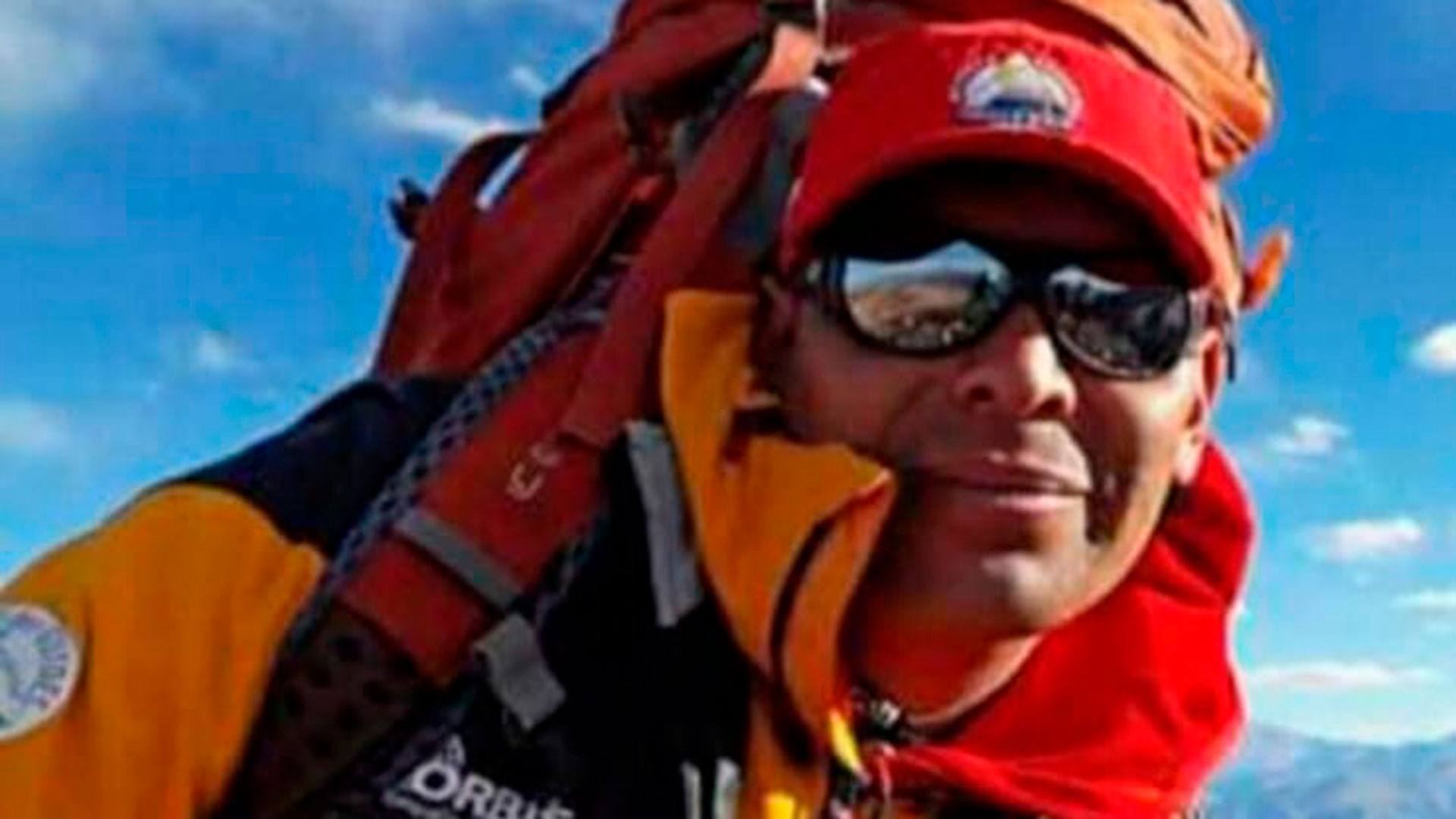 On August 19, he will be part of an expedition to Manaslu, the eighth highest mountain in the world

On the 19th of this month, he will fly to Kathmandu, Nepal for one of the most transcendental experiences of his life, what you are looking forward to and preparing for mentally, physically and spiritually. It will take about 40 days of trekking to reach the summit at Manaslu, the eighth highest mountain in the world, with 8163 meters. According to the climber, mental preparation is essential in the Himalayas because it is a very important challenge.

“In the Himalayas, the features are different from the mountains we are used to in the north of Argentina. There is a lot of snow, glaciers, ice and crevasses. And add the altitude. The highest in our country is Aconcagua with 6962 meters. In the Himalayas, they go over 8,000, so there are difficulties in terms of altitude and other techniques for the difficulties presented by the terrain,” he explains.

Does a high-altitude mountaineer have an advantage in adapting to extreme altitudes? “I think so because all my life I have lived at this height and always higher.”. I have always said that if I go to a mountain above 8000 meters, I will do it without supplemental oxygen. Everyone makes their own decision, mine is to make such a mountain. The rest of the expedition will use oxygen,” he predicts. Apart from the fact that he has never been at this height, he says that he is preparing to “improve the conditions because the body at this height no longer adapts”, but on the other hand, he knows that he will immediately go up and down from this height .

Manaslu will await you with its challenges and skies different from those of Pune, but with its own mystique.

The Argentine mountaineer who broke records in the Himalayas: “I know I can die and it doesn’t scare me”
Juan Pablo Toro, the Argentine who wants to write history in the ‘killer mountain’ of the Himalayas
The details revealed by the Argentinian archaeologist who discovered the best-preserved mummies in history