Surrender and the dissolution of the marriage partnership are two of the most common options resorted to by couples.

Probably, when a couple gets married, they don’t think about when and what their divorce will be. According to the Supervision of Notaries and Registration, in 2021 62,314 civil marriages were official and 26,519 were processed. That means approximately there were two divorces in every six marriages last year.

Given these figures, it is important to know what are the alternatives for a person who will marry to protect their property and assets.

The first thing you need to know is that the marriage process automatically leads to the creation of a marital partnership. The same situation happens for people who live in a free union after two years, a period which, once completed, makes room for the patrimonial company. Both types of partnerships involve a financial obligation between spouses or permanent partners.

To avoid this, at the end of the relationship disputes over economic issues reach the courts, one of the most common mechanisms used by couples to protect personal or family assets is the signing of surrenders. This agreement agrees with the regime that will manage the assets and their distribution during the termination and liquidation of the marital partnership. 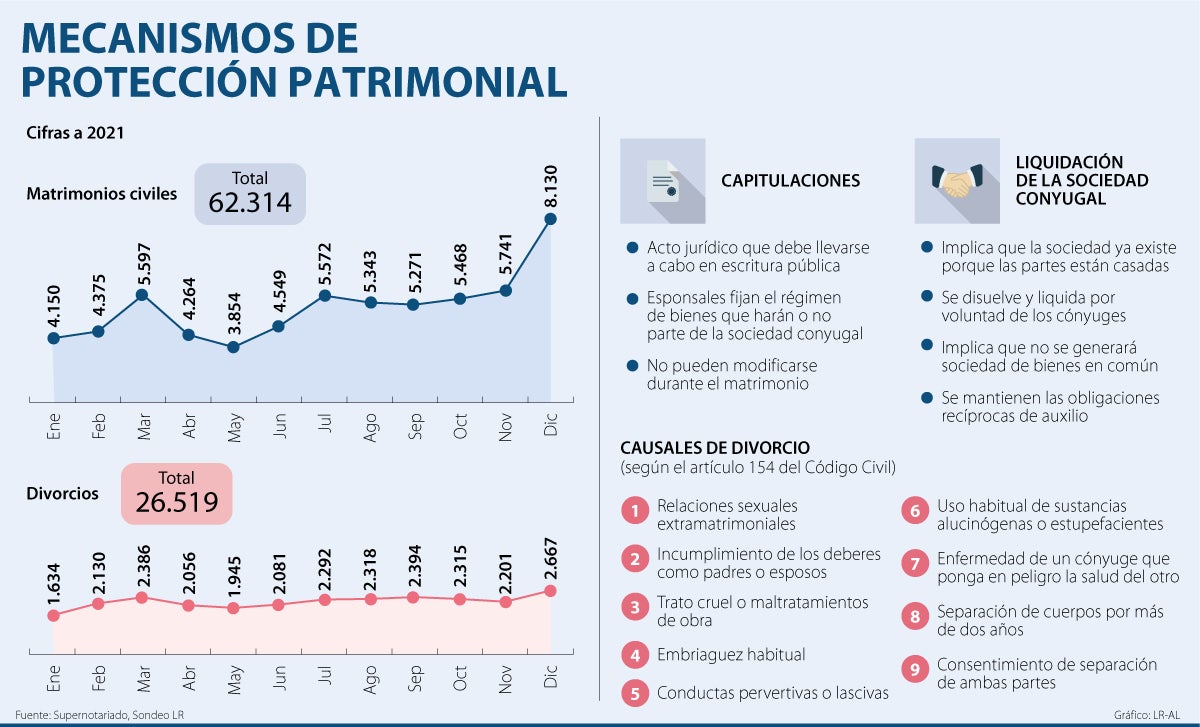 According to Jorge Peralta, Legal Director of Peralta & Asociados Abogados, in this document, people “commit that the assets they own, now or in the future, will not enter into a marital or de facto partnership.”

He added that it was vital to take into account the exact dates of each action, because, for example, in order for capitulations to take effect during marriage, they must be signed at least six months before marriage. The same period applies to people who want to live together and who also want to protect their property.

In addition to the date of signing, surrenders must meet other requirements for their contractual validity.

Margarita Useche, a family law expert at the University of Externado, explained that the agreement should be concluded through a public act. “This does not mean that the document will be published, but rather it is part of the notarial protocol,” he said.

He also clarified that, contrary to what is happening in US law, which signs prenuptial agreements, in Colombia, surrenders are only economic in nature and can not cope with the obligations of the couple. In other words, this document “cannot deal with contact situations in order to impose possible sanctions”.

It is possible that the parties will change their minds about what they initially set out in the agreements. To solve it, there are two alternatives. The first is possible when the document has not yet been processed at the notary office: in this case, the couple may request that the public act not be notarized and the signed agreement be invalid. What happens when surrenders are already a public act? In that case, Peralta said, both should repeal the public act so that things return to their previous state. In any case, this must happen before marriage.

In addition to surrender, another method of patrimonial protection often used by couples is the dissolution of the marital partnership. Although this is born of the act of marriage itself, the consent of both spouses must be submitted to a notary for its dissolution. “From this liquidation, no more goods or assets will enter the marriage partnership,” Peralta explained.

This process of liquidation can take place at the time of marriage, in case the spouses do not want the property acquired after the marriage to enter into a possible marital partnership. If there was no previous asset, the dissolution can be done in zeros.

However, if assets have already been involved, it is the duty of the spouses to make an appropriate distribution. In the event that no mutual agreement is reached and you still want to liquidate the marital partnership, the family judge will be the one to determine how the assets will be distributed between the two. This action does not necessarily imply the existence of divorce, but simply that there will be no partnership of common property.

In the case of marriages, Useche noted, the liquidation of the patrimonial society should take into account all the assets acquired since the beginning of coexistence, and not from the two years in which the society emerged.

By registering, you can customize your content, manage your topics of interest, schedule your notifications, and access the digital homepage.